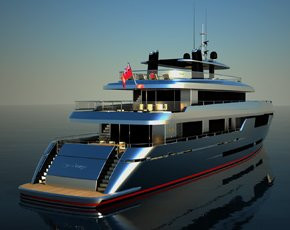 With the growing focus of eco-friendly superyacht design, Chinese shipyard Kingship have begun construction on the 44m Green Voyager – presenting a new way of cruising.

Kingship is set to present the 44m Green Voyager at the second Singapore Superyacht Conference on the 12th of October, introducing the new addition to the eco-friendly design fleet.

The presentation for Kingship’s Green Voyager will explain certain elements of her designs, such as how the yacht breaks new environmental and efficiency barriers, the technical and operational philosophy of her build and how Kingship can lead rather than follow superyacht trends by producing new and innovative eco-conscious designs.

Designed by Axis Group Yacht Design of Viareggio, Green Voyager will also be able to achieve efficiency increases of 16% in propulsion and around 20% for hotel loads alongside an unprecedentedly low level of emissions, therefore exceeding RINA Green Plus Platinum notation.

Kingship’s Green Voyager has also been nominated for a the Union Internationale Motonautique 2010 Environmental Award, being one of the first “products” entered. The UIM are usually concerned with racing and record breaking on powered craft, however the UIM Environmental Working Group took Green Voyager into consideration, commenting, “every activity, be it large or small, conducted on the water can make a difference in the fight against climate change.”

The Award will be presented to the winner at the UIM Award Ceremony in the prestigious Salle de Etoiles in Monte Carlo on the 5th of February 2011.