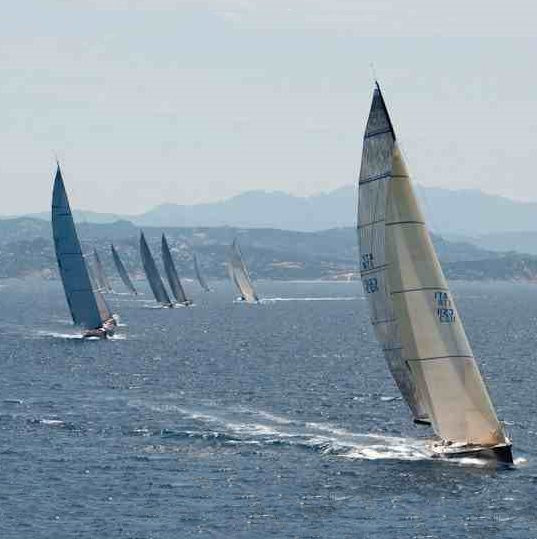 Saturday 12th June saw the final day of the Loro Piana Superyacht Regatta. Conditions were strong as the 39m superyacht Ganesha was coined the winner.

The 2010 Loro Piana Regatta proved to be not only an eventful regatta, but an exciting showcase of some of the finest sailing yachts on the water. First off the block were the performance class, led by the 30m Wally yacht Indio.

As the racer Highland Fling pulled through the fleet on Indio’s pursuit, the cruising class were released at one minute intervals, with the Wally 148 Saudade first away.

Competitors had to deal with a variety of different conditions throughout the race, such as moderate winds at the start of the regatta, whilst at the north-westerly turning mark of the course, deep into bomb alley, the winds reached speeds into the 20s. To the South of Porto Cervo the sea breeze was reportedly attempting to fill in, therefore making the wind disappear.

The Performance Class yachts were caught without wind 30 minutes away from the line as the Cruising class caught up, also hitting the wind vacuum. The conditions changed once the final end of the Cruising Class reached the collection of yachts, giving Unfurled and Gliss momentum to reach the line with Saudade just pushing past.

After the wind had begun to once again push the yachts to their final destination, the 39m Fitzroy Yachts built Ganesha, designed by Dubois, managed to score their second win in the Cruising Class, ensuring the overall prize as Indio reached lead position in the Performance Class.

Ganesha’s race statistics were helped by optimising their headsail inventory for the regatta, giving Ganesha the winning edge over Wednesday's race by 18 minutes and by 21 minutes on  12th June.

Ganesha’s Captain, Alex Pamment commented: “It was quite ironic, because they set out a reaching race to try and level the playing field a bit and on the last leg of the race, the fleet were parked up close to the finish line and we were being pushed along by a little cloud and we caught up the rest of the fleet. So it was another good win and the boss is very happy”

The Loro Piana Superyacht Regatta is scheduled to take place again in early June 2011 with an inaugural Caribbean Regatta and Rendezvous for superyachts being announced to take place in the British Virgin Islands on 16th-20th March 2011 in association with the YCCS.