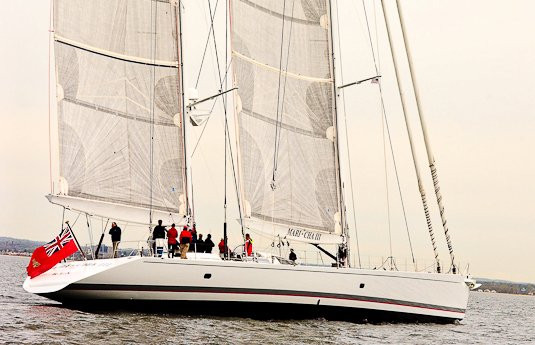 Sailing yacht Mari-Cha III, the record-breaking super maxi sailing yacht, has left the Derecktor Conneticut facility after an extensive five-month refit. Launched in 1997 by Sensation Yachts, Mari-Cha III was designed by Philippe Briand with a traditional interior by John Munford.

In 1998, the 44.7m (147ft) Mari-Cha III broke one of sailing’s most prized records when she sailed from New York to the Lizard in eight days, 23 hours, 59 minutes, and 41 seconds, shattering the existing record. The superyacht became the fastest yacht in the Sydney to Hobart race in December 1999, when she covered the race course in one day, 18 hours, and 27 minutes.

During Mari-Cha III's refit, Derecktor stripped the yacht down to give access to all systems and prepare for an in-depth preventative maintenance program and systems upgrade, including upgraded air conditioning and new generators.

The shipyard performed a complete check of hydraulics, the electrical system, and electronics, and service manager Steve Shaw supervised a re-piping of the entire yacht. Simultaneously, Derecktor repainted topsides, the superstructure, bottom, and rigs in the ventilated paint shed.

Clear Group International of Connecticut handled Mari-Cha III’s interior refit, returning the wood surfaces to a clean white top joinery finish. They also redesigned the bathroom with vanity marble covers to upgrade the vanities without tearing out the existing joinery.

Captain Damien Durchon, who has been with the Mari-Cha program since 2003, commented on choosing Derecktor for Mari-Cha III’s refit: “...Crossing the Atlantic was well worth the effort to take advantage of the quality workmanship at Derecktor.”