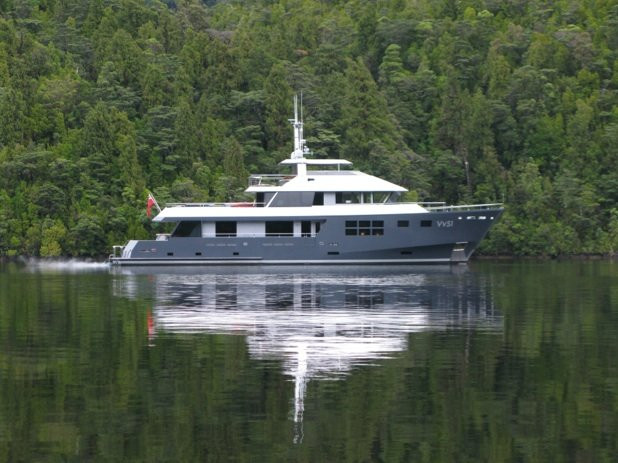 Built in New Zealand in 2007, VvS1 has a busy 2016 summer cruising schedule ahead before being hauled at McMullen & Wing’s Auckland shipyard in April 2016 for an extensive programme of works.

VvS1 won the World Superyacht Award in 2008 for Best Motoryacht Under 40 Metres, as well as three more awards at World Yacht Trophies in Cannes. The yacht is owned by New Zealanders Sir Michael and Lady Christine Hill, two of the country’s most prominent yacht owners.

McMullen & Wing CEO Michael Eaglen is delighted to have confirmed the refit. “Michael and Christine and their family are very active yachties,” he said. “They have explored many of the world’s traditional yachting hotspots, only to return even more passionate about New Zealand’s stunning coastline.

“They are proud flag bearers for our beautiful country and it is an honour to play our part in their ongoing enjoyment of the unique and stunning yachting that New Zealand and the South Pacific offers and to help maintain their magnificent and award-winning New Zealand-built yacht in pristine condition.”

With the refit project being centred on survey work, the work set to be undertaken will be largely technical. “The focus of the project will be the yacht’s 10-year Lloyds special survey and replacing the generators and shore power converter, but we will also be undertaking some general maintenance and improvements around the yacht,” says Richard Low, Projects Manager at McMullen & Wing.

“We’re looking forward to working closely with the captain and crew to deliver a top quality cost-effective programme of refit works and taking advantage of the availability of McMullen & Wing’s outstanding central Auckland facilities.”

McMullen & Wing was founded in New Zealand in 1969.