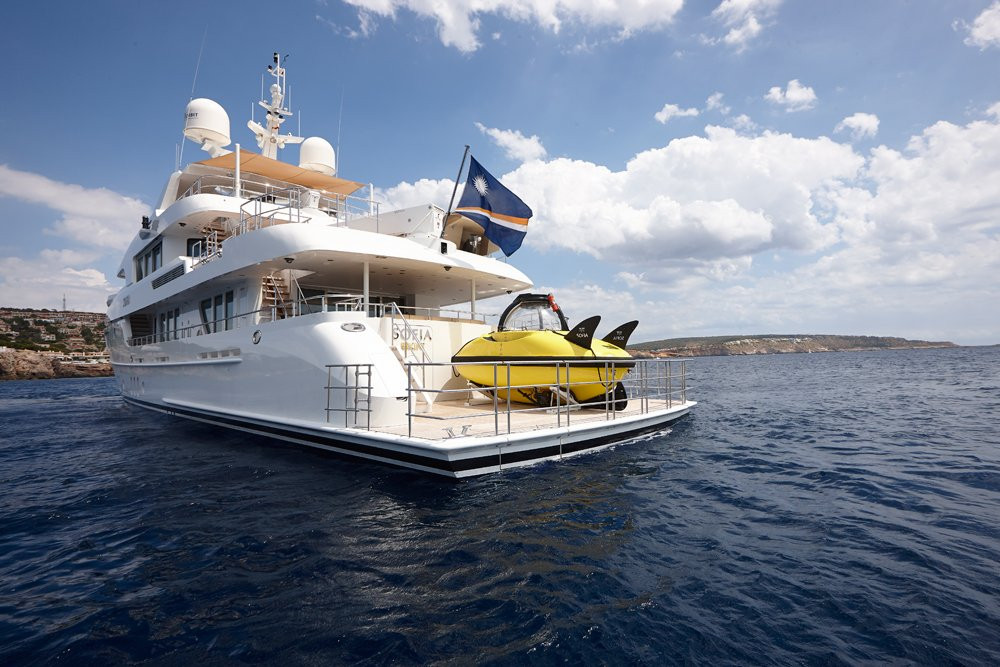 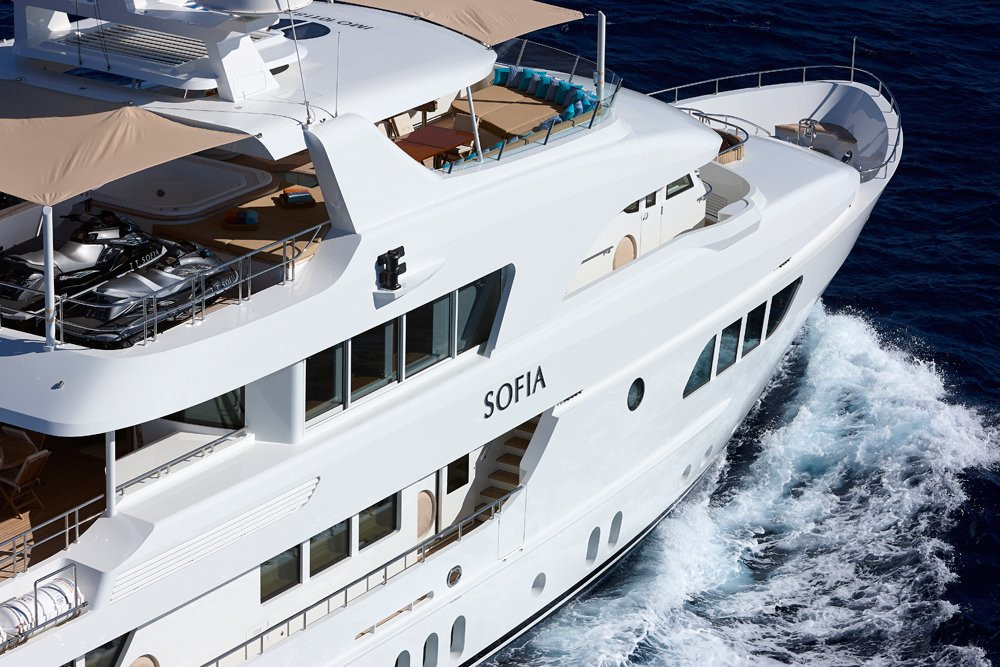 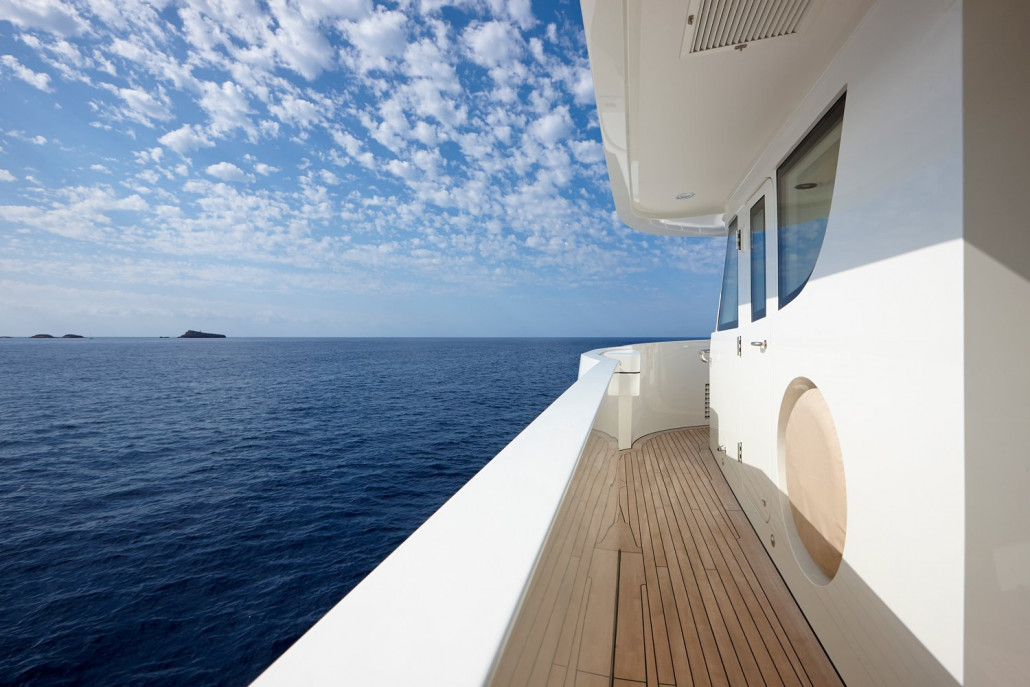 Moonen Shipyards in the Netherlands has successfully launched the 42-metre custom superyacht Sofia for a repeat client. Not only is she the largest superyacht launched to date by the yard, Sofia also features a three-seat submarine, a wide range of other technical innovations, and outstanding noise & vibration attenuation.

A crossover between go-anywhere expedition vessels and the classic modern yachts that are Moonen’s hallmark, Sofia was custom-designed with safety, functionality and redundancy to the fore. Built to Lloyds and MCA, she implements the latest building techniques with top-of-the-line equipment and systems.

Sofia also brings together some of the finest creative minds and hands in the Dutch superyacht industry. Designed by René van der Velden, Stolk Marimecs was responsible for the complex naval architecture and engineering. Frank Pieterse and Marilyn Bos - de Vaal from Art-Line then went on to develop the remarkable interior, which features a wide range of genuinely innovative features. The experts at Inoferro had their work cut out to incorporate the wealth of stainless steel detailing, as did the woodworkers and many other craftsmen across all disciplines from Moonen Shipyards. The result is a triumph.

Sofia was created for a repeat client with bespoke requirements based on his wide range of previous experiences. Having bought his first GRP motoryacht in 1994 and sailed several other vessels around the 80-foot range as well as an X-612 MKII sailing yacht (which he still owns today), Sofia’s owner first teamed up with Moonen almost a decade ago.

“In 2004 I embarked on a quest to find a high quality motoryacht that would allow me to cruise the world in comfort together with the sailyacht,” her Owner explains. “My research led me to Moonen Shipyards, where I purchased the brand-new Moonen 84 Sofia (now Eleonora). I then commissioned a new Moonen 97 to meet my personal requirements, which was duly launched in 2008.

“My experiences with Sofia and Sofia II emphasised the quality of design and build of Moonen. The yachts were safe, solid and reliable even in rough weather. I welcomed many experienced sailors and owners onboard, and all were impressed by the construction quality, low noise levels and immaculate carpentry work.

“When the time came to fashion my new yacht, therefore, the choice to partner again with Moonen was easily made. This third Sofia would be the yard’s largest yacht to date and – unprecedented for her size – carry a private submarine. Although the design started with a two-seat craft, during the construction we switched to a three-seater. This decision influenced the complete design and made the challenge even greater, but Moonen responded with typical flair."

“My yacht was extended and a new crane designed and installed to allow the launch and retrieval of the submarine. Although the alterations were made when the yacht was already at the first stages of construction, the yard handled the complex modifications with minimal delay. Once again, Moonen proved its flexibility, innovative approach and uncompromising commitment to meet and fulfil client wishes.”

Seeing the submarine neatly housed on Sofia's aft deck today, the casual observer will be unaware of how multifaceted such an achievement is. At the time Sofia was initially designed in 2009, the first ‘superyacht submarines’ were being introduced to the market. It is unlikely that the submersible craft companies had a 40-metre yacht in mind to carry a submarine, but the owner of Sofia was instantly captivated by the idea. A keen diver, the owner saw that a submarine would be an excellent way to share his joy of the underwater world with friends and family who don't like diving. The initial contract for Sofia therefore specified a two-seat submarine: It was only ten months later that the decision to upgrade to a three-seat version arose.

As Sofia left the yard for a summer of cruising in the Mediterranean followed by a winter season in the Caribbean and Alaska, her captain Ian Westman expressed his pleasure at the yacht in his charge. “I have run yachts from four yards at the very highest echelons of the superyacht industry and am convinced that Sofia is on a par with the very best. The amount of interior volume is hugely impressive as are the large aft decks. All this has been achieved within a design that never feels cramped in any way. Like all custom yachts Sofia is a prototype, but this is not noticeable as she performs incredibly well in every respect.”