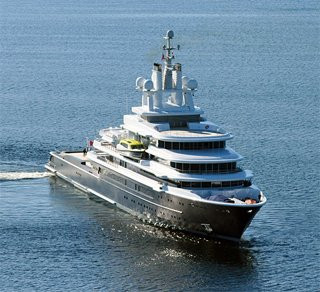 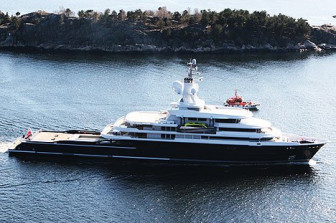 The delivery of motor yacht Luna, the world’s largest expedition yacht, took place on Saturday 10th April 2010. Her new owner was confirmed by newspapers to be Roman Abramovich, as he arrived at Kristiansand, Norway to take delivery of the 115m superyacht.

Abramovich travelled by private jet to Kjevik Airport where he was transferred to a helicopter with his family to the landing pads of M/Y Luna, located just south of Kristiansand's coast. M/Y Luna, the world’s largest expedition yacht, is the latest addition to Abramovich's personal fleet as reported by Norwegian paper fvn.no.

Launched last October by Lloyd Werft and Stahlbau Nord Shipyards, the 115m Motor Yacht Luna has recently undergone outfitting and painting. Luna has now made her way to her new owner who travelled with his family on her maiden luxury voyage around the Kristiansand Archipelago, enjoying a day out on what is now a part of the most revered personal fleet on the water.

Designs have also been released regarding Luna’s extremely luxurious and innovative design. Newcruise Design were responsible for M/Y Luna’s exterior styling, featuring two helicopter pads facing forward and to the rear around the large communications tower. She also holds transom doors at the sides, which lead directly to that yacht's high quality tenders.

The large, open aft deck holds a covered swimming pool and sunbathing areas, much like the stunning 82m Alfa Nero, with a dedicated open luxury leisure area featuring a beach club leading down to the swim platform.

M/Y Luna is an expedition yacht in its own class, allowing the owner to cruise greater distances without having to stop or refuel; traversing difficult weather conditions at sea whilst enjoying a great amount of luxurious living spaces.

It is believed that Motor Yacht Eclipse, soon to become the world's largest mega yacht, will alsobe delivered to Roman Abramovich in time for the summer.

Abramovich was ranked top in Forbes 2008 rich list with a current estimated worth of around $11.2 billion. With two of the largest and most stunning yachts to take the water paired with the ownership of Chelsea Football Club, we’ll be keeping an eye on what yachts venture to South Africa this year for the world cup.