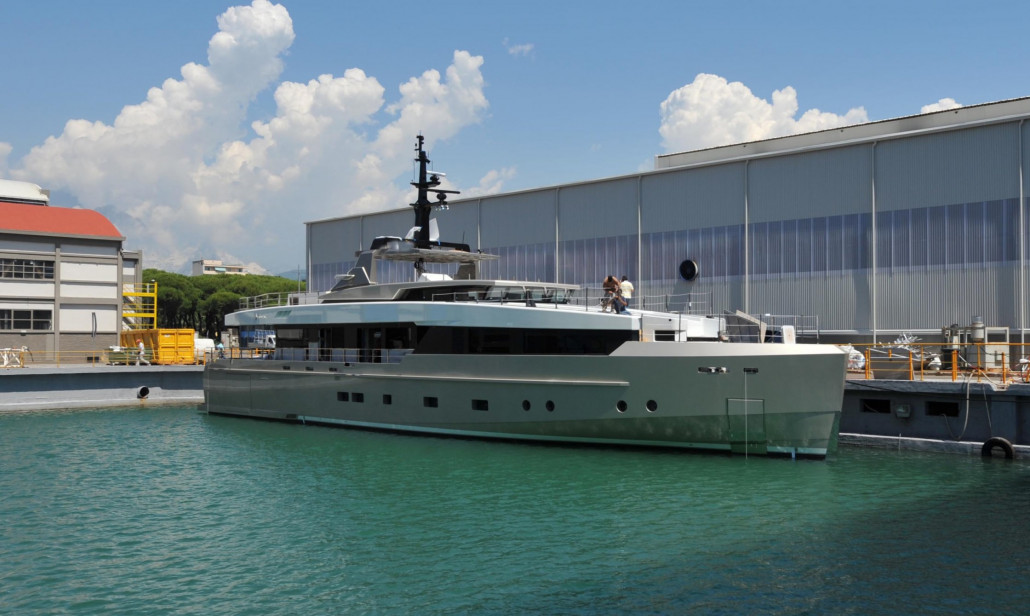 This week saw the launch of another outstanding creation by Admiral as the 37-meter motor yacht ‘NONO’ touched the water for the first time.

‘NONO’ is a fine example of the new Impero Series by Admiral. With exterior design by Luca Dini and interiors design by the Admiral ‘Centro Stile’, she is a semi displacement superyacht with raised pilot house, all built in aluminum and featuring a very modern and innovative line, a real design-breaker within her category.

She has been designed and engineered for long distance traveler vocation and she is able to reach a top speed of 20 knots. ‘NONO’s elegant metallic light-bronze hull and a pearl-white superstructure with matt black areas sit comfortably on the water thanks to the in-built stability and engineering package in place.
This feature also helps with the overall design of the yacht, which seems lighter too, not to say that the interior volumes feel bigger than on other yachts of the same size. This is particularly emphasized in the aft area of the main salon, as this is an all glass area, only interrupted by little pieces of structures, as the engine room machinery, which is usually placed within this area, has been moved a bit forward.

The main deck features huge and comfortable spaces with substantial headroom, especially in the main salon area, while the full headroom opening sliding doors on both sides further contribute to the open space feeling of the deck. Within the main salon also the dining area finds place.

A little bit forward there is the separate pantry for crew, which is connected to the side deck through a watertight door; the pantry gives access to the wheelhouse and to the galley area, which is directly connected with the crew quarter, placed on the lower deck and including two double crew cabins and a captain’s cabin, all with ensuite bathroom. The crew area also includes a crew mess and a separate laundry.

On the lower deck four large guest cabins find place, two of which are VIP’s and may be considered almost as a second and third owner’s cabin, due to the use of the yacht, which is going to be private only and used by the whole family of the Owner. Each cabin features its own bathroom and all the hullports are opening.
Going back to the main deck aft cockpit, the guests are surrounded by large spaces, all dedicate to relax, sunbathing and ‘al fresco’ dinners; this area also gives access to the aft beach club, where the transom door opens up, creating a big aft terrace. This area also includes a bar corner, a day head and a steam bath.

From this area crew and guests can easily access to the garage, which features a side opening door and has been designed for hosting tenders up to 5m, operated by a travel lift crane. The garage also gives the most comfortable access to the engine room, which also includes an engine control room and which can be also accessed from the main deck.

M/Y ‘NONO’ will be displayed at the next Monaco Yacht Show and Fort Lauderdale Yacht Show 2014.