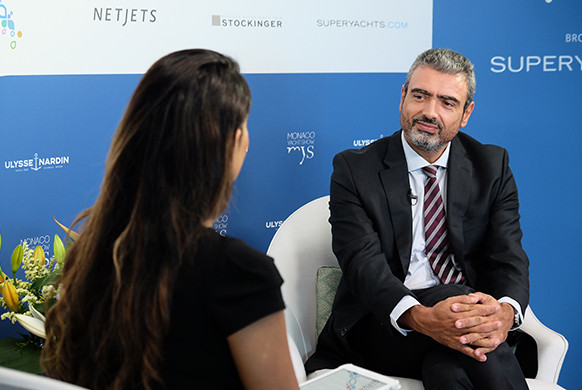 We were excited to welcome Stavros Katsikadis of Flisvos Marina to the Breaking News Centre during MYS 2018. He came to discuss the prevailing attraction of yachting in the Mediterranean and how Flisvos Marina is attempting to keep things fresh.

Katsikadis came to Quai Antoine 1er with a wealth of information about Flisvos Marina and the activity of Greek yachting at present. WIth Flisvos Marine being only a 5-minute commute from Athens, it is little wonder that the marina receives a heavy volume of traffic from big and small yachts alike. The cultural capital hub of Greece throngs with tourists throughout the year thanks to a year-round temperate climate and incredible history.

Flisvos Marina's strategic position has helped to make the marina one of the most popular and well known along the Athena riviera. "Alongside her strategic position is the wealth of services available for superyacht owners, a very high level of infrastructure and a variety of luxury amenities on the premises." It also is famed for its position on a deep water basin, making access for heavier bottomed ships much easier and more navigatable.

Katsikadis was keen to convey that whilst Flisvos itself is becoming increasingly popular, this is also thanks to an increase in popularity for yachting in Greece, in part thanks to a stronger economy and due to the governments increased pushing of tourism. "The demand for berths has increased not only in Flisvos Marina but across the Grecian coast in general in the past few months."

In order to maintain the influx of superyacht owners looking for berths at Flisvos, Katsikadis informed us that the marina is aiming to bring more events by the summer of 2019. These events will include music concerts and the proposed organisation of a competitive sailing regatta in collaboration with Rolex.

As well as these proposed events, one such event that is definitely taking place this October will be the ICOMIA World Marinas Conference which will be held from 25-27 October 2018 in Athens.