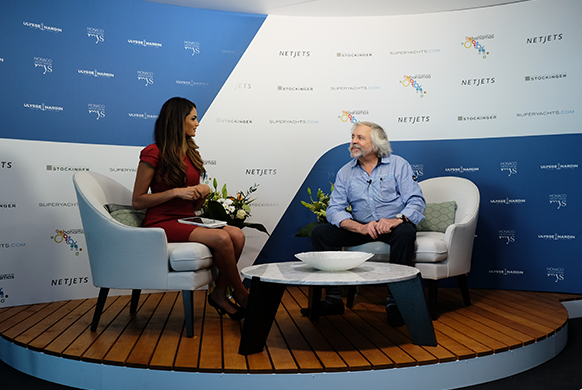 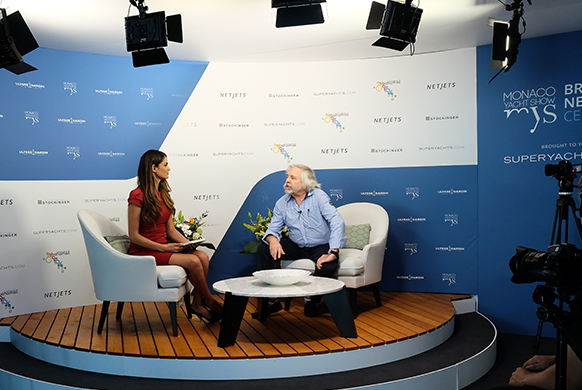 This afternoon, the Breaking News Centre welcomed Ken Freivokh of Ken Freivokh Design to discuss the past, present and future of yacht design in the face of oncoming change.

Ken Freivokh returns to Monaco this year with a number of his designs in tow, including an all-wood 70m sailing yacht residing mere moments from our studio. However, it is the 74m project being undertaken with Turquoise Yachts that is really causing a stir: "The 74 is a great yacht, with exteriors by Vallicelli and our interior and layout. It's quite spectacular and has the most enormous beach club."

Also in collaboration with Turquoise, Ken Freivokh Design have brought a stunning 77m to MYS which possesses a unique drawcard: two stacked swimming pools on the beach club side, one saltwater and one guest.

With such designs in mind, Ken alludes to a change in design trends that he has detected during his illustrious career, claiming that modern yachting is all about capturing the experience of the ocean, with more value placed on external spaces: "The emphasis has moved away from having saloons on saloons, to having places that are for the enjoyment of the sea and give a purpose to being on a yacht."

Designers are often characterised by their adherence or non-adherence to tradition, and we are keen to find out where Ken places himself on this spectrum. However, according to the designer, there is merit in both reaffirming tradition and breaking boundaries, and ultimately variety is key: "Some owners like traditional, classic... But equally there is a move away from the ritzy, glitzy competition type yachts to something that is more purposeful. Yachts that can carry a number of toys and tenders, for example."

Ken continues: "For quite a while in the industry there has been a reluctance in the industry to adopt new technology and finally we are seeing a breakthrough." A good example of Ken's percieved 'breakthrough' is the use of glass in yacht design; whilst builders once refused to consider glass a viable component, resulting in limiting windows to small portholes, vessels utilising large amounts of glass for sweeping panoramas are now all the rage.

New age yachting arguably places focus on welcoming the ourdoors in, and whether or not this shift is widely perceived, the prospect of the design world being in a state of transition is an exciting one.

"Designers are having new ideas and owners are listening," claims Ken, referring to the idea that change is coming from both sides of the imagining process - an observation which bodes well for its development.