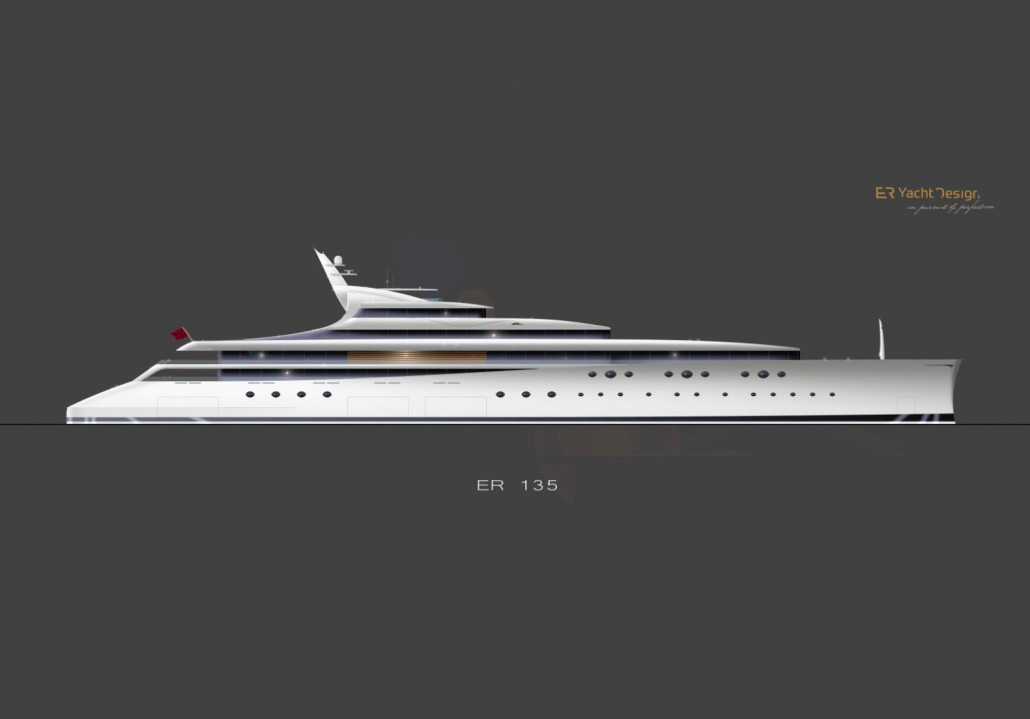 A new 135 metre superyacht concept has emerged on to the market from the drawing boards of Ivan Erdevicki, the Canadian studio’s largest and most imaginative project to date.

Taking on the luxury liners of the 30s and 40s and merging it with the ever-changing concept of modernity in cutting-edge design is ambitious, but intriguing. After all, glamour is a reflective state that drives modern styling, constantly being over-simplified as a ‘bygone era of luxury’.

We take a look at the new ER135 concept and find out how the designers are evoking the spirit of a different time in a critical time in cutting-edge design.

Meticulously stylised to reflect the studio’s creative DNA while, the ER135 was drawn with a plumb bow measuring 10 metres from the waterline. The understated shear line provides an elegant base for the six decks providing the baffling amount of space on board and an aft superstructure curve design provides the visual distinction.

The owner’s private areas are aimed at provided the highest levels of luxury possible, taking up the entire top deck with a forward facing master suite, private salon and dining room with adjoining kitchen. The panoramic views surround those on board, even when in the gym and private swimming pool.

The swimming pool itself converts to a helideck at the push of a button, but the immediate attraction is derived from the central atrium. This space provides connects the decks and provides an easy flow of guests between accommodation, public areas and leisure centres around the yacht via two atrium facing glass lifts.

The atrium also hosts an enviable piano bar, a reception area and dance floor to entertain on a grand scale, cementing the take on the era of 30s and 40s luxury liners.

This leads us to the distinction of separation between modern and classic. The modern and imposingly elegant exterior takes on the shifting landscape of modern design, the interior space and layout provides a classical touch so perfectly positioned on the water.