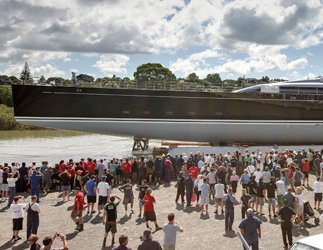 Vertigo, a.k.a. ‘The Big One’, has now been successfully launched into the waters of New Zealand and stands as the largest sailing yacht ever to be built by Alloy Yachts.

After 29 months of construction, the team at Alloy Yachts watched this sleek and sophisticated 67.2m luxury sailing yacht reach the water with pride.

This record-breaking luxury yacht began construction in October 2008 and features a world-cruising ketch design from Phillipe Briand and has an ‘Urban at Sea’ themed interior design from Christian Liaigre.

Alloy Yachts also recently began cutting plate on the brand-new 43.9m sloop construction project, AY45, due for launch in 2012 - alongside two other yachts in construction named AY43 and AY44.