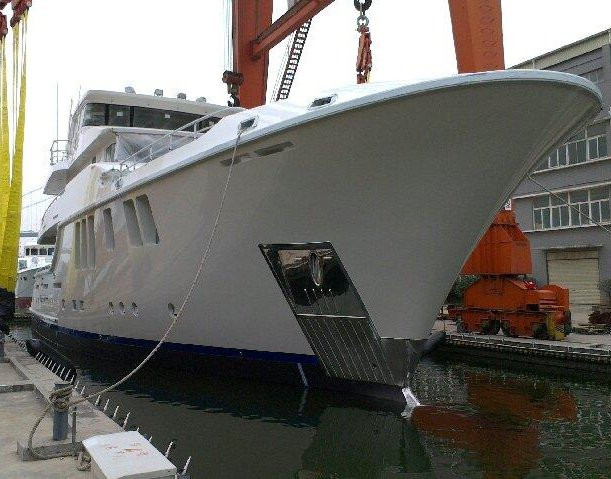 The Nordhavn 120, the largest Nordhavn yacht to date, after it was launched into the test tank at South Coast Marine in Xiamen, China and now stands one step closer to delivery.

Dan Streech, President of Nordhavn’s parent company Pacific Asian Enterprises, Inc. (P.A.E.) noted that so far the future queenship of the Nordhavn fleet has functioned in the water exactly as expected. “She floats perfectly,” Streetch said. “All 800,000lbs of fibreglass, steel, wood, stone and glass have been brilliantly engineered and managed to float exactly as predicted.”

The tank test is the penultimate stage for the N120 prior to being delivered to her new owner in July. She will remain in the tank for approximately one month as systems are fired up and tested. Upon completion, she’ll undergo final ocean trials and ABS certification assessment in preparation for delivery – via her own bottom – to Vancouver, Canada.

Due to logistics, the sheer mass of the vessel as well as economic factors, it’s been concluded that N120 hull #1 will be delivered on her own bottom. With a non-stop range from China to Vancouver at a speed of within 3 knots of what freighters typically travel, the decision to “drive” her home was made thoughtfully, however, confidently.

After nearly five years from concept to construction, P.A.E. is thrilled with anticipation at the impending unveiling of the Nordhavn 120. Our architecture and design team, together with the craftsmen at South Coast, engineering, contractors, the phenomenal interior design staff at Destry Darr and countless vendors have cultivated a world class yacht that is second to none.

At the surface, the N120 is a naval engineering feat; as capable as it is luxurious. But the yacht also proves to be a symbol of P.A.E., persevering at a time when the yacht/superyacht market was in a virtual tailspin. With the business of boats having apparently stabilized, the time is perfect to present the Nordhavn 120 to the world, a design prepared to rival any superyacht built by anyone, anywhere.