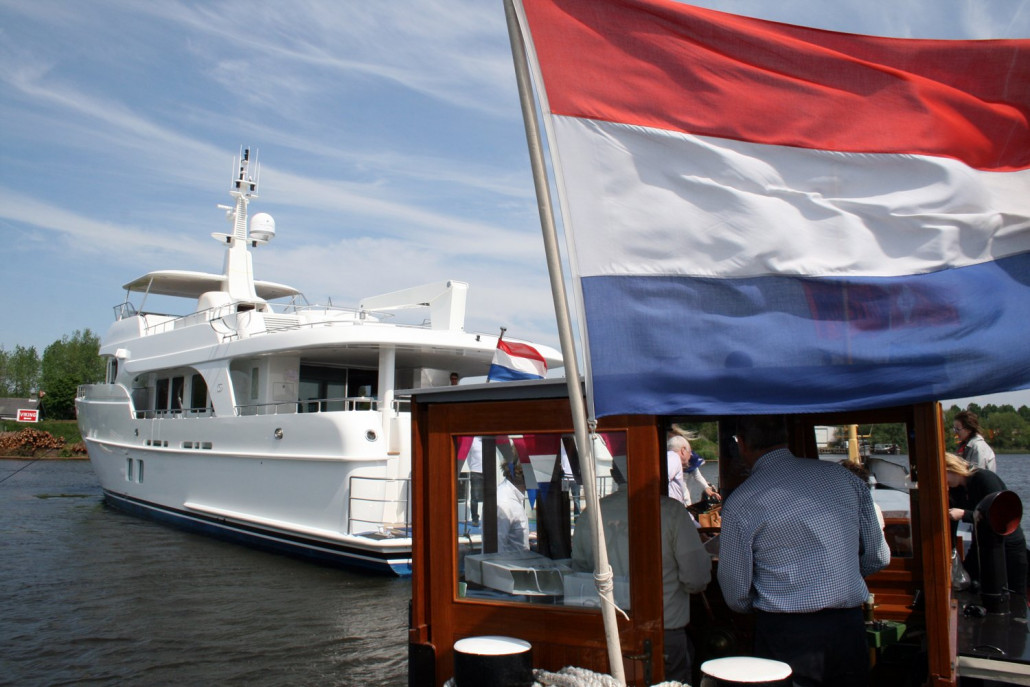 On Board The All New Moonen Explorer 100

As per the seven year old tradition of introducing journalists to the new launches, Moonen Shipyards in the Netherlands took us on a tour of the all-new Moonen 100 Explorer. This long distance, expedition-type yacht was custom-developed with Vripack Naval Architects for a repeat client. Combining a robust performance with stylish looks and smooth lines, the Moonen 100 Explorer has been created to allow her owners to travel the world in exceptional comfort and style.

Fans of Moonen and Vripack will identify clear elements of both these renowned Dutch brands in the exterior profile of the Moonen 100 Explorer. The superyacht features the muscular appearance of the popular Vripack Doggersbank range, previously seen also on two earlier partnerships with Moonen: The 90’ Commercial Break and the 92’ Poseidon, both launched in 2003. And then there are the graceful lines and curvaceous superyacht detailing with which Moonen is associated, previously combined to great effect on an explorer-type vessel with the award-winning 114’ My Issue in 2006.

Although classed as an MCA ‘Short Range Yacht’, the Moonen 100 Explorer is also eminently suitable for long ocean passages. The yacht carries some 36,000 litres of fuel, and is equipped with a water maker and a Hamann marine sewage treatment plant. She has been designed with high levels of fuel efficiency that give her a range of 5,000 nautical miles at ten knots. The efficient hull shape, bulbous bow, sophisticated weight-saving measures, and highly efficient propellers and engines also reduce costs and minimise the yacht’s environmental impact.

These major fuel efficiencies are combined with some of the finest life aboard facilities you are likely to see on a 30-metre yacht. Comfort is clearly centre stage, with some remarkably low noise and vibration levels being achieved by flexible mounting of the interiors, the fitting of flexibly mounted vibration dampers and a careful campaign of insulation. An excellent sea-keeping performance and impressive stability at anchor means the owners will enjoy their time onboard wherever they may choose to explore.

There is also plenty of space for the owners and their guests to relax during long voyages in an interior with a suitably maritime style, featuring blonde teak and walnut. A deliberate choice for the layout of the Moonen 100 Explorer was to feature three large suites in order to maximise comfort for the passengers. The owners’ stateroom covers the full beam on the lower deck and has a particularly spacious bathroom plus a walk-in wardrobe.

The suite is especially roomy as there are only two other guest cabins, one of which has a double bed, the other two singles and a Pullman berth. As well as sleeping facilities for seven guests, the Moonen 100 Explorer offers accommodations for four crew members in the bow. There is a great deal of storage both in the cabins and in a range of dedicated storage areas, such as under the crew compartment in the foreship, which also doubles as a laundry.

The yacht features a very comfortable flybridge forward of the mast which includes a sofa and sunbeds. Aft of the mast is a separate sundeck area, another roomy zone with a wet bar and a Jacuzzi as well as further sun-worshipping options. There is also a dedicated area on this level for tenders and toys, which do not therefore need to be moved in order for the owners and guests to enjoy the facilities on this deck. This arrangement also frees up space in the lazarette area, where a large window bathes the voluminous space in natural light. On the starboard side is a lovely sauna plus a day head and shower.

“The Moonen 100 Explorer benefits from the very latest insights in design and yachtbuilding efficiencies and quality control,” says project manager Sietse van der Zee. “In partnership with the naval architects and engineers at Vripack, we built the interior in a faster timeframe thanks to a greater degree of prefabrication and more efficient outfitting process. The systems were developed in section, allowing for intermediate controls on progress. In addition, the yacht is lighter than expected without sacrificing sturdiness and keeping fuel efficiency in mind. The project has enabled us to develop an even leaner and cleaner construction process that will undoubtedly enhance future builds.”