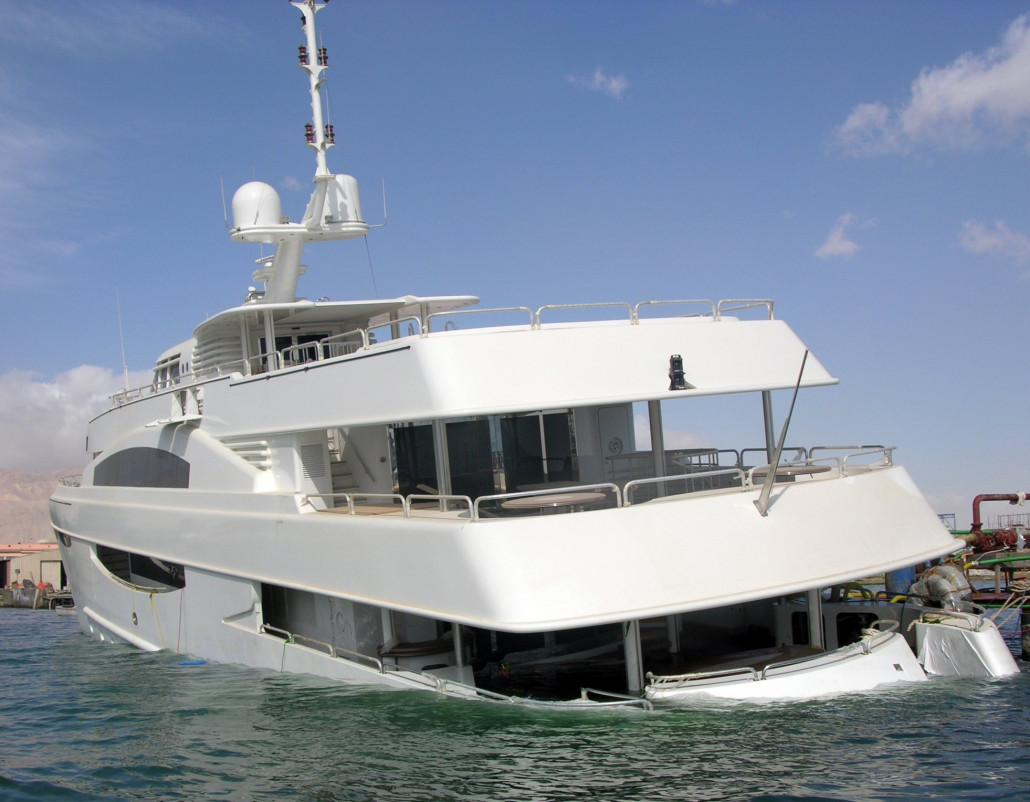 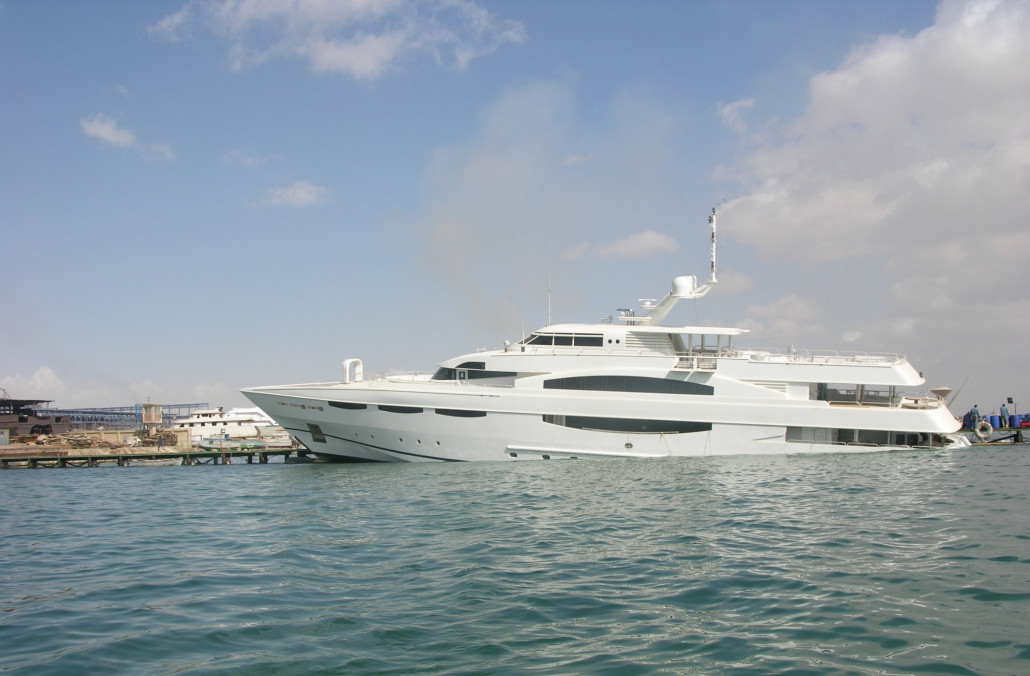 It was supposed to be one of the last sea-trials that the proud 58m motor yacht Ocean One was to take before being commissioned and handed over to her owner. The crew were optimistic when the new vessel set off from the shipyard in the Egyptian seaport city of Suez, but all of that was about to change. Pantaenius Yacht Insurance highlight the importance of having the right people behind you in a crisis.

The crew’s lunch break was rudely interrupted by the sound of the bilge alarm, as water poured into the vessel through one of the three jet drives. Once the captain realized that nothing could be done to stop the inflow of water, he did the only thing he could do in the situation – he immediately let the anchor go, started the engine and took the fastest route possible back towards the shipyard.

Once the yacht reached the harbour, the Captain steered Ocean One’s prow onto the slipway to prevent the total loss of the vessel. However, the yacht still sank to the bottom of the harbour next to the pier so that the main deck was completely flooded.

What had happened? Pantaenius immediately dispatched two of its staff to Suez to examine the damage together with a local official. “Fairly soon we established that a piece of wood had got wedged in the impeller,” explains Holger Flindt, Manager of Pantaenius’ Claims Department, who was at the scene. “The resulting vibrations dislodged an inspection port, leaving nothing to stop the water from pouring in through the dinghy garage and into the engine room.”

Trying to salvage this €35m yacht became a really difficult task, “We could not accept the quotes we received from two salvage companies because we thought the amount they were charging was excessive,” Flindt elaborates. It was therefore left to the yacht insurance specialist to take the initiative, drawing on its wealth of experience in handling complicated salvage projects.

“Local conditions did however make the operation rather difficult. Everything is done somewhat differently in Egypt and you have to adapt to that. We had to obtain recovery equipment from many different places. Even the infrastructure takes some getting used to and communication with the shipyard and the companies involved also wasn’t always easy.”

The real challenge though was to lift the yacht up and out of the water. The plan was to use the tidal range of over 1.5m to the team’s advantage. First of all, the leak was sealed. The team would then pump as much water as possible out of the flooded compartments.

According to Flindt, “the problem there was a severe that the vessel might capsize.” Pantaenius therefore enlisted the services of the classification society Germanischer Lloyd (GL). Pantaenius and GL both have their head offices in Hamburg, just a stone’s throw apart from each other. “We often work together and know each other well,” Flindt confirms. GL put Ocean One’s blue prints through its state-of-the-art simulation programs to calculate the flooding scenarios and ballast requirements.

As Flindt explains, “This process took two full weeks, which demonstrates how complex the task was. All the processes were carefully planned. We had to ask ourselves which ballast tank had to be filled at what time to keep Ocean One stable while the water was being pumped out of the individual compartments. Finally the simulation results showed which way it was possible to lift the vessel.”

The salvage operation went on for almost five days. When the yacht was finally able to float again, the team managed to tow her ashore using a boat trailer. It was well worth the effort. Not only was the yacht recovered without any expensive floating crane being deployed; Pantaenius managed to save between €800,000 and €1,000,000 by conducting this salvage operation itself, instead of outsourcing it to a salvage company. The total cost of the damage to Ocean One came to over €10,000,000.

"This case is a perfect example of how Pantaenius has taken advantage of all its available business resources," comments Martin Baum, Managing Director of Pantaenius Yacht Insurance. "I am very proud of our people and think that they have done an outstanding job for all parties involved. Not only have we satisfied a client but also will this benefit our other clients as insurance is a risk-bearing community. Therefore, if claims are managed efficiently underwriters do not need to increase the premiums too much."