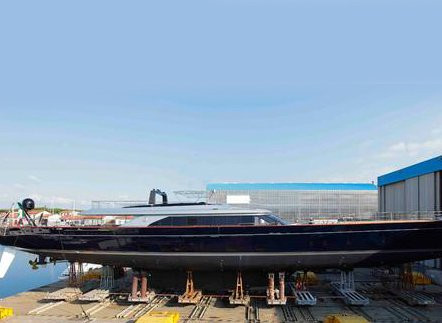 The Perini Navi Group has successfully launched the second sloop in the 60 metre series: Perseus³.

The Perini Navi Group, world revered yacht builders, has launched Perseus³, the second yacht in their new generation 60m series, at their Viareggio shipyard. This series has important innovations in hull lines and on board technology.

Perseus³, designed by Perini Navi naval architects in collaboration with New Zealander Ron Holland, has a Perini Navi sail control system and a lifting keel whose draft varies from 4.30 to 12.30m. Her 75m mast and 23m boom are in carbon fibre as is her standing rigging. Perseus³ is also the first Perini Navi yacht to have a carbon fibre bowsprit. The bowsprit was a request of the owner’s that will allow for fast sail changes and a larger sail plan.

Hull and superstructure in aluminium were constructed at the Perini Navi-Yildiz shipyard in Turkey and make for a GT of less than 500 tons and an optimized displacement of circa 570 tons.

The interiors were designed in house by Perini architects and can accommodate twelve passengers in five cabins, one of which has sliding beds.

The owner’s suite is full beam and can be divided by a removable wall. Two 6.20 carbon fibre custom tenders, two opening beach platforms and an infinity pool on the fore deck compliment the exterior layout.

A third yacht in this series is scheduled to be delivered in 2015.