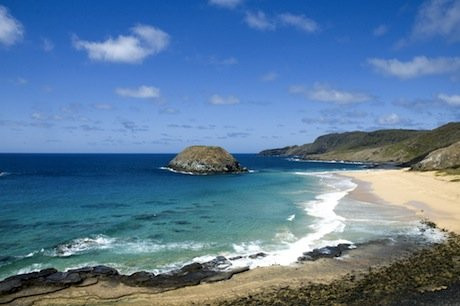 In November 1502, a map with the power to change world history was smuggled to Italy. The Cantino Planosphere was only the second chart to depict the New World. It detailed the African Coast and the Indian Ocean with astounding accuracy, yet its most interesting portrayal was of the Brazilian ‘continent’. It showed a generation of foreign sailors a closely guarded secret: that South America’s riches stretched far, far south.

The map detailed weird and wonderful lands. None is more of an anomaly than Fernando de Noronha. By rights, this Eden-like archipelago shouldn’t exist. Bobbing 230 miles out in the Atlantic, Fernando is a submerged mountain range than somehow breaches the sea. Tropical currents feed warm water around the 21 islands, allowing scuba divers to submerge 40m without a wetsuit.

More importantly for our story, it’s a mystery how Fernando de Noronha even made it onto the Cantino map. No captain admitted to seeing the archipelago.

One story opines that Spanish adventurer Juan de la Cosa – a pal of Christopher Columbus – visited the island in 1500. Others claim that the great Amerigo Vespucci himself founded Fernando. From his ship’s log it’s clear that he visited in 1504: “This is paradise! Clear waters and an infinity of trees. Beautiful birds, that eat out of one’s hand, a marvellous port that the whole crew loved.”

Yacht crews certainly love it today, whoever found it. So unique is Fernando’s flora and fauna that it forms a UNESCO World Heritage Site. Its protected eco-status – combined with strictly limited visitor numbers – means that only a fortunate few are able to while away their winters here. For those repositioning their yacht in the Caribbean or South America, I can’t think of a nicer transatlantic stop.

Turtles and dolphins abound here. Yet visitors will often find themselves the only one on the beach. Brazil’s 50 or so billionaires frequent Fernando de Noronha as privacy is almost assured.

Indeed the archipelago is so distant that Brazilian authorities once used it as a ridiculously picturesque penal colony. According to Guardian reporter Mike Hodgkinson – one of the few journalists to set foot on the islands – “capoeira fighters were once incarcerated there, unaware that their living hell would one day morph into a high-end eco-destination.” How times changes.

And the map that first led sailors to Fernando? It was later secreted in a ducal palace, hidden by Pope Clement VIII, lost in a riot, then rediscovered above a butcher's shop in Modena in 1859. It now resides at Modena's Biblioteca Estense, but you’ll need a bloody good excuse to see it. After all, look what happened last time it was stolen...