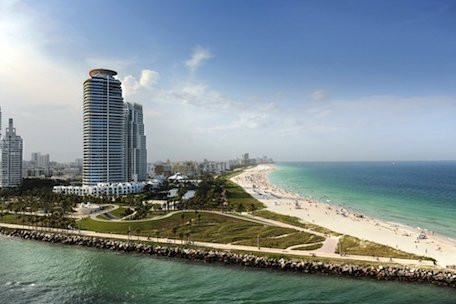 Just as the Cannes Film Festival heralds the start of the Mediterranean superyacht season, Art Basel Miami kicks off the same in the Caribbean. The 11th edition of this contemporary art fair pulls in more members of the global glitterati than the Monaco Grand Prix. And as corporate sponsors include Absolut vodka and Davidoff cigars, it’s a damn sight more fun than Davos.

Despite the attendance of Tommy Hilfiger and Calvin Klein, the male dresscode this December is red trousers, pocket handkerchiefs and loafers san socks. It’s look that would suit the guys in the Y.CO Fort Lauderdale Office 25 miles up the Florida coast.

But truth be told, ‘art’ and ‘Miami’ make strange bedfellows. In 1984, the city earned the sobriquet ‘Murder Capital of the World’. A year later, American TV network NBC screened Miami Vice. This series sought to play on the metropolis’ mean reputation, but only ended up enhancing it. Yup, according to many a Miamian, this town owes its current cachet to Crockett and Tubbs.

Miami Vice showcased the city’s sand, sunshine and alfresco soul. Actors Don Johnson and Philip Michael Thomas staked out marinas, nightclubs and art deco hotels – although the TV crew often had to paint each venue before filming could commence. Granted, the program’s premise of an undercover cop who lives on a yacht, drives a white Ferrari, and wears $1,000 Armani suit (with a T-shirt underneath!) was a little far-fetched. But it remains one of the most popular shows of the 1980s. The series is still screened in Bulgaria, Australia and across the Arab World.

So, Miami is now stocked with superyachts, celebrity and stunning art. But where do the elite retreat to next? Like Crockett and Tubbs in an early episode of Miami Vice, they’re off to Bimini in the The Bahamas, a 50-mile sail east of Miami Beach.

Bimini promises big game fishing, 30m diving visibility and marinas for yachts of over 60m (200ft). Boats are already arriving from both Miami and the Mediterranean in preparation for the winter charter season. But none will look as cool this Christmas as Don Johnson’s Chris Craft Stinger.