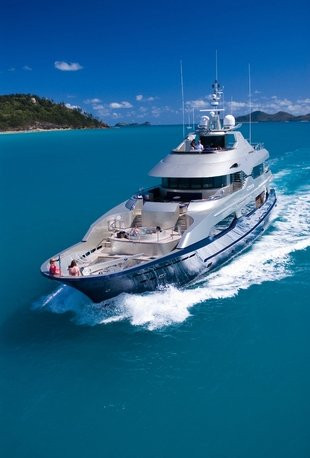 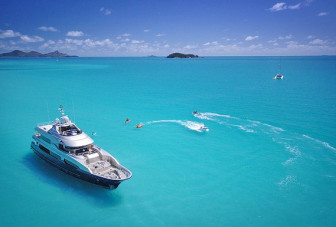 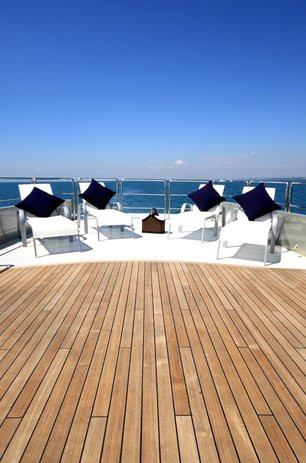 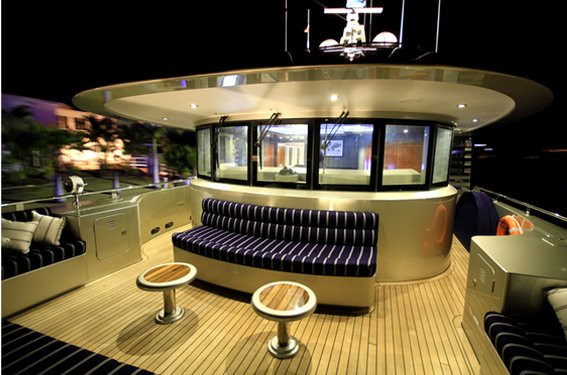 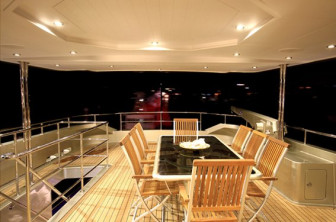 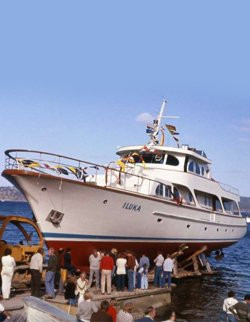 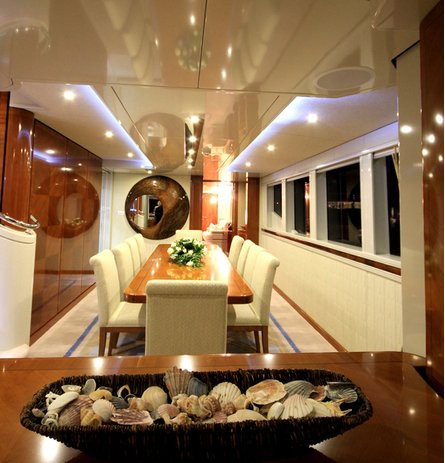 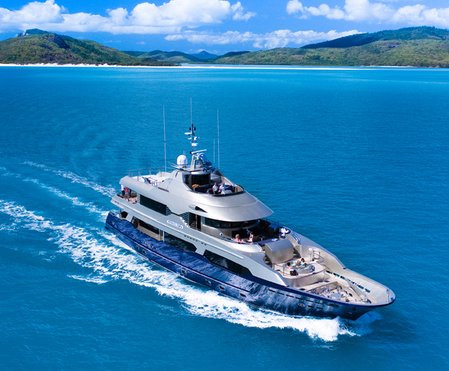 Princess Iluka has been transformed from an unused, traditionally styled yacht sat in the docks of a Brisbane Canal, into what is now considered as one of the most stunning yachts on the water. Princess Iluka is bringing global attention onto the refit industry; a viable alternative to new build.

She was recently re-launched as a beautiful and fully equipped 34.5 metre superyacht into the warm Australian waters and now holds state of the art entertainment systems, cutting edge navigation tools and Dual V-12 Mercedes Diesel Engines capable of 13 knots at max speed.

The yacht’s luxurious and spacious interior is down to the rebuilt superstructure which now allows eight guests and six crew, holds nine plasma TV screens, dual DVD/Music Receivers, high quality speaker systems and a touch screen master control panel, all topped off by a sleek and sophisticated navy blue hull with a silver sprayed top-side.

However, Princess Iluka was not always this regal. When she was discovered by Robert McVicker in 1999 she was simply named Iluka, meaning ‘by the sea’ in Aborigine, and was originally launched in 1979 by respected shipbuilder Ray Kemp.

Robert McVicker decided to take the opportunity to buy, renovate and resell the yacht. McVicker, quickly becoming attached to Iluka, began her extensive rebuild to the tune of over $14 million.

His dedication and perfectionism, working with a small team, turned it into more of a slowly progressing hobby rather than a standard rebuild done in a much shorter timeframe. Iluka’s superstructure, decks and engineering were removed, and her hull timbers stripped bare. The superstructure was remodelled and rebuilt whilst the hull was lengthened to include a new transom.

Robert McVicker decided to bring naval architect Bernie Cohen on board to help guide the project to success; a designer who is well known for his work on the Maritimo Cabriolet Series. The yacht underwent an entire rebuild, having both the interior and superstructure removed, leaving a wooden husk underneath.

When Robert McVicker bought Iluka, she held unique and special secrets. She was the largest ever yacht to be built with Huon Pine, now a protected species by the Australian government. Huon Pine is such a resinous wood it never rots, and took two years to cure before original construction began.

Iluka was a truly unique find as the wooden keel Ray Kemp originally built her with is an ancient piece of gum-tree which is believed to be around 750 years old.

Keeping all of the original wooden structure, which also works as a vibration and noise dampener, she was given a new superstructure which worked around the curvature of the yacht. The rebuild brought out an entirely modern edge with interiors that were comfortable, luxurious and well designed, and she was ready to be re-launched as 'Princess Iluka'.

Attention on the refit industry is now growing, due to the current financial climate, as an alternative way to own a yacht. With the typical refit time period ranging from six months to two years, an owner can refit a vessel to any specification with the help of a good refit company.

Princess Iluka was re-launched like new, with great respect and admiration following in her wake. She stands as an example of what can be achieved through drive and dedication, and a keen eye for opportunity in a tough economic environment.

Charter Princess Iluka to see her in all her glory, who will be traversing the southern hemisphere around Australia, Fiji and the South Pacific