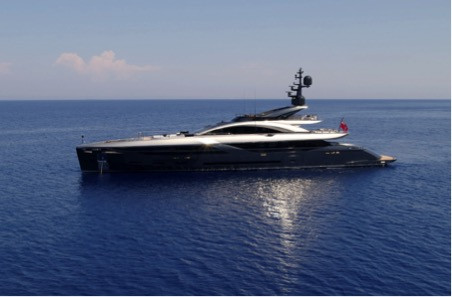 Italian shipyard Rossinavi has revealed it will present its 49m Flying Dagger at the Monaco Yacht Show (MYS) later this month.

We reported on the launch of the motoryacht — which was commissioned by a private client — back in April 2018. Flying Dagger features an exterior by Venice-based Enrico Gobbi of Team for Design and an interior by Rome-based Lazzarini Pickering Architetti.

Constructed from aluminium, the superyacht offers the latest in noise and vibration reduction techology to provide a quieter and more enjoyable interior. It is a feature that is likely to prove useful when the yacht pushes towards its impressive top speed of 31 knots, with a cruising speed of 24 knots, while achieving 3,300nm at a speed of 12 knots. This performance is thanks to three MTU 16V2000 M96L engines coupled to Kamewa waterjets. The waterjets are part of the reason why the motoryacht’s draught is no more than two metres, which when combined with an air-conditioned engine room make the idea of exploring the Caribbean even more tempting — if an owner ever needed to be tempted to the region that is.

Not too much is known about her interior except that the sub-500gt motoryacht offers a beam of 8.9m with the owner’s suite, which includes a terrace that is accessed via glass sliding doors, is located on the main deck forward. While four spacious double cabins on the lower deck can sleep 10 guests.

“The interior design of this project has been realised with the idea of feeling the water from every corner of the boat,” says Federico Rossi, COO at Rossinavi. “The main saloon features three large glass floor-to-ceiling doors to enjoy the view of the sea but also allowing the space to transform into an al fresco dining area.”

Flying Dagger will be present at this year’s Monaco Yacht Show, which runs from 26 to 29 September.