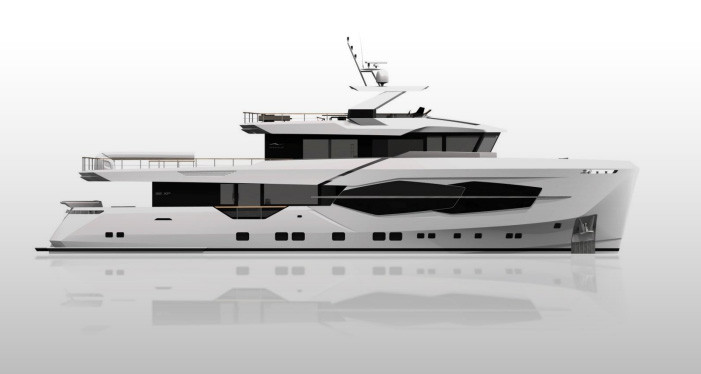 The latest yacht delivery by Turkish shipyard Numarine is the second of its new 32XP series. The new yacht has a five-cabin layout and an aquamarine blue hull. The yacht was sold to an experienced American owner in August 2017 and has been named Calliope. She will be officially premiered at the Fort Lauderdale International Boat Show in November 2018.

Compared with M/Y Marla, the first in the 32XP series, Calliope has a different cabin layout and a different coloured hull, yet both boats have the same LOA of 32.64m. The latest yacht has five cabins instead of six and the master suite has been placed forward on the main deck while the extra space has allowed for another saloon with a bar on the upper deck aft.

The second 32XP hull can accommodate up to 10 guests and is capable of long-haul cruises thanks to her proven hull and multiple storage facilities.

Her exterior and interior design come from Can Yalman, renowned as a design partner of the Numarine shipyard. Yalman has created a yacht with distinctive lines and a deliberately rugged silhouette, with extensive and angular windows designed to add to the powerful look. The main deck of Calliope offers a large cockpit with 64 square metres of living space available for sunpads and seating areas. Inside, a generous saloon of 48 square metres leads to the lobby area where guests will find a gym to the starboard side and the full beam master cabin forward.

The master cabin offers 34 square metres of space, which includes an ensuite with a separate shower and a bath. Below deck guests will find two VIP cabins and two double bed cabins, all with ensuite bathrooms. There is also 85 square metres of living space on this deck. Below deck forward is accommodation for the five-person crew.

Calliope is expertly equipped for long cruises with her exceptional noise and vibration reduction technologies, which surpass even DNV Class 1 Comfort Class. Numarine has worked closely with long-term partner Silent Line to achieve this, and have done so by disconnecting the cabins from the yacht's superstructure. Even with engines running, the noise in the owner’s cabin is under 37 decibels and whilst at anchor is as silent as 30 decibels, which is the equivalent to being in a quiet rural area.

The Numarine 32XP series have a very efficient displacement hull that gives each yacht a top speed of 14 knots, a cruise speed of 12 knots, and a 4,000 nm range at 9 knots. The third 32XP unit was sold in September of 2017 and will be launched in Autumn 2018.