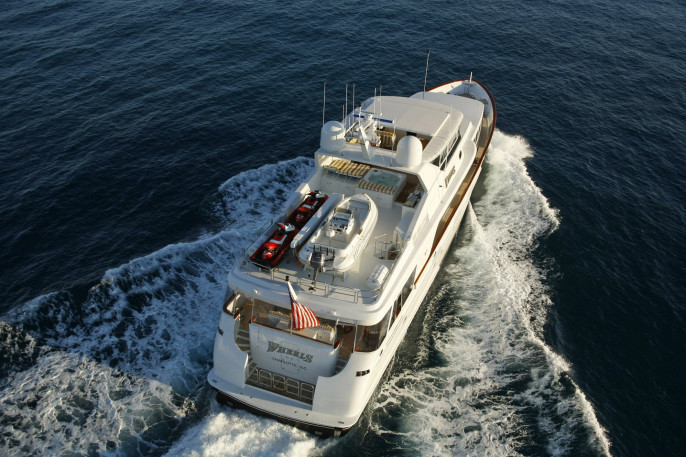 Seven superyacht sales follow in the uplifting wake of Monaco

Continuing what seems to be somewhat of a brokerage frenzy in the last week, seven new names and a number of brokerage companies add their names to the ever growing list of recent superyacht sales.

My Shanti was built for repeat clients who were looking to replace their 50 metre motor yacht also designed by Disdale, with a larger and more child-oriented vessel. She caters for 20 guests sleeping and was listed at an asking price of US$103 million.

IYC announced the sale of the 37.8 metre Trinity Wheels, a tri-deck motor yacht built in 2002 by the American shipyard. Previously known by the names Mustang Sally, Victory Lane, and Anjilis, she accommodates 11 guests in five cabins and had an asking price of US$9.95 million.

Motor yacht Caramia was sold in a deal with Fraser Yachts acting as buyer and Camper & Nicholsons (CNI) as seller. Built by Italian shipyard Arno in 2008, the 27 metre sleeps six guests in three cabins and has a super-fast top speed of 39 knots. Caramia had been listed with CNI since April and had an asking price of €4.5 million.

CNI also had success with the sale of 40 metre Mirabella, a Concorde sailing yacht built in 1991. She underwent an extensive refit in 2005 before appearing on the brokerage market. Although she has been on the charter market since her original launch, it appears Mirabella’s new owners wish to make her for private use only. She sleeps 12 guests and was listed with a sale price of US$2.9 million.

Chamberlain Yachts adds the sales of Les Belles and Amore to the list, with both deals having been closed in the last week. The 36 metre Le Belles was built by American shipyard Millennium in 2003 and was believed to have been sold to a Russian buyer represented by Atlantic Yacht and Ship. She sleeps nine guests in four cabins and was listed at US$4.9 million.

The second sale for the brokerage agent was the 1996 32.92 metre Monte Fino yacht Amore, sold to an American buyer represented by J. Woods Marine. Sleeping 10 guests in four cabins, she had an asking price of US$2.45 million.

Closing out the list is The Marine Group, the sole house responsible for the sale of the 32.59 metre Caribbean Sparkle built by Denison in 1991. Listed at a price of US$1.495 million, she is apparently in need of a refit following her last in 2005. She sleeps eight guests in four cabins.

"IYC announced the sale of the 37.8 metre Trinity Wheels, a tri-deck motor yacht built in 2002 by the American shipyard."

"IYC announced the sale of the 37.8 metre Trinity Wheels, a tri-deck motor yacht built in 2002 by the American shipyard."