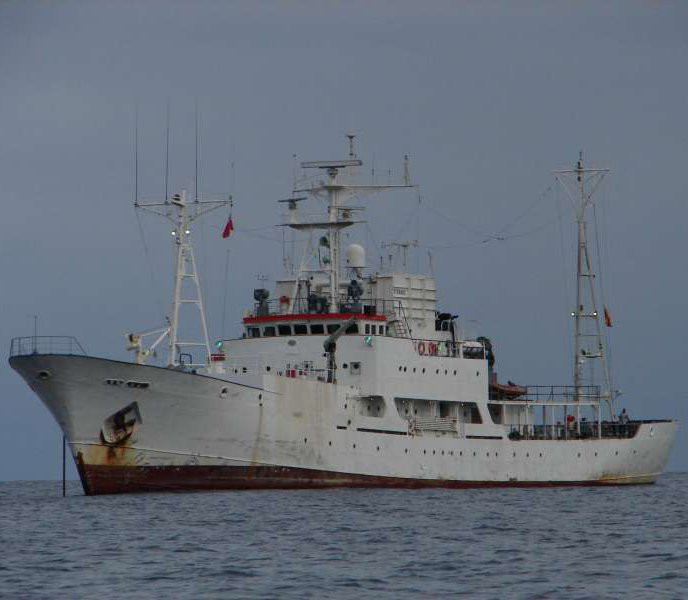 On April 1st M/Y Titanic (Ex: Kelso) was on its way to Puerto Rico from Grenada for a major refit when it started taking on water and began to sink. Holding nothing but a skeleton crew, the vessel lost power 108nm from Saint Croix, U.S. Virgin Islands and was saved by an emergency SOS via satellite phone.

Taking only 24 days, the 78.66m Titanic was built in 1971 as a Fisheries Research Vessel in Japan, eventually adopting the same name of the famous ship that tragically sank in 1912. After 39 years on the water, the 1,700 ton Titanic was on its way for a major conversion in Puerto Rico when it began taking on water.

Put into service in Cape Town for 13 years as a Cray-fishing vessel around Tristan Da Cunha & Nightengale Island and doubling up as a passenger vessel licensed to carry 12 people from the remotest island in the world and Cape Town. She then headed toward Granada in 2009.

Mark Corbett was part of the skeleton crew who phoned for help on a satellite phone to Aberystwyth where his friend, Alex Evans, was shopping in a DIY shop with his mother. He quickly took down the co-ordinates of the sinking ship which had lost power and the use of both Long Wave and VHF Radios. Evans, who is also a lifeboatman, phoned the Maritime Rescue Co-ordination Centre in Falmouth, Cornwall.

The cavalry arrived three hours later with planes finding the ship barely above the water. She was then towed toward safety by U.S. coastguards aboard The Chincoteague in St Kitts.

A spokesman for the Miami Coastguard has stated “Once at the scene, a rescue and assistance team was deployed aboard the Titanic to pump water from the vessel... after the team removed more than 8ft of water from the engine room, the vessel was stabilised and power was restored.”

Coast Guard Representative Cmdr. James Sutton, Sector San Juan chief of response commented on the actions taken by the tug and rescue crew “The Chincoteague sailed more than 140 miles to the scene; they assessed the situation and worked through the night to save that ship. I am very proud of the crew for a job well done.”