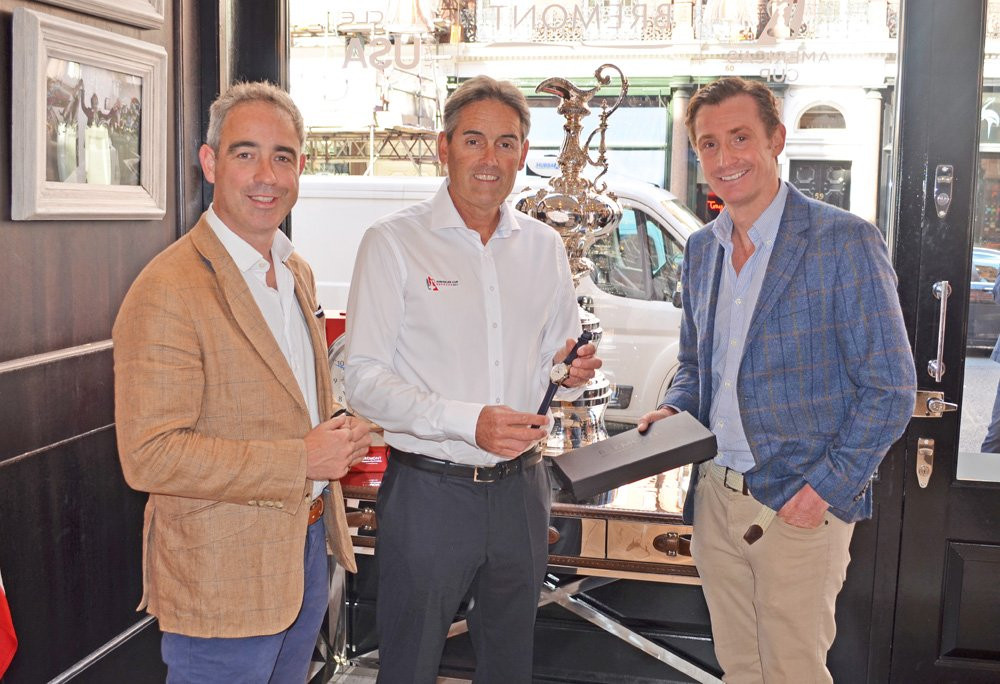 Considered by most as one of the greatest sailors the world has ever seen, Sir Russell Coutts has already achieved a lifetime’s worth of medals and accolades. Now, having stepped down from competitive sailing, the five-time America’s Cup winner and former Olympic Champion has a new mission: to organise and promote the fabled America’s Cup around the world.

For the past few years, Sir Russell’s focus has been on the next edition of the America’s Cup which begins in Portsmouth this weekend, with six teams from around the world preparing to challenge for the 164-year-old trophy.

We caught up with the New Zealand-born sailing legend in London ahead of the big kick off, where we discussed the sport’s rapid evolution along with his thoughts on the upcoming World Series race in Portsmouth.

We’re just days away from racing, how is it all shaping up?
I think it’s shaping up to be a really good series. Performances will partly depend on wind conditions, so if it’s a light wind day you’re going to see different winners to a strong wind day. But there are massive difference in the ability of the sailors. There were some unofficial races the other day and I think Land Rover BAR won all three in one day. But that will change over the coming months. The learning curve is so steep that who knows who will come out on top in 2017?

There will be six teams racing in Portsmouth – do you think any more will join the roster for future races?
I’d like them to. We’re in discussions with three teams at the moment and I think we can probably be hopeful of getting one of those across the line. Frankly I don’t think there’s much more room to have any more for this cycle, but ultimately it would be great to have ten or twelve teams out there battling away.

Would you say it’s the most competitive the cup has been for a long time?
For the last 20-30 years, there has usually been two, maybe three teams, that have really had a chance of winning and I think it’s very, very open this time. You even look at a new team like Softbank from Japan and some of the decisions they’ve made in terms of personnel, I would rate them as definitely having a chance of winning.

What do you think of the technological innovations currently taking place in sailing?
This foiling catamaran technology is evolving pretty fast and has been over the last few years. When I look at the speeds these boats are going now, when we raced the cup in 2010 in Valencia with 115-foot multihulls and now these 45-foot catamarans would beat those big boats around the course easily, so the development in literally five years has been enormous and will continue to be so.

Do you think the AC50 boats are going to be around for a while?
When the teams changed the rules – because they all had to vote for it – they said, look let’s not change it unless we all adopt the agreement that all teams keep the AC50 until next time. You may need some minor tweaks, but basically they are going to keep the same parameters. We’re talking to some potential new teams and some of them may decide that they won’t enter this time, but may do next time. And if they know what the boat is going to be and what the main rules are around the event then they can logically start to prepare their programmes and even look at hiring some expertise.

What about the claims that the One Design elements of the boats are stifling innovation?
It’s just wrong. When you look at most of the performance differences in the boats this time, the key innovations are still wide open. In fact I’d almost argue they’re too wide.

Let’s talk about technology for a moment: the main innovations with the wing sail aren’t the shape of the wing sections. You could open up a book from the 1930s and – I’m not kidding you – they are reasonably close to what you’d end up with today. By far the biggest performance factor is how you use those wing sections, in other words the control system of the wings. That’s open. Then there’s the boards and the rudders, which are reasonably open this time.

You’ve got some limitations about the boards not being able to be outside the width of the boat and there’s a certain limit about the depth the board can be. But one of the most critical differences in performance is the section shape of the boards, the actual profile dimensions, which are open enough to provide a massive difference in performance. Also the structural properties, in terms of how much they flex and so forth. The hull shapes are relatively fixed now, but if you opened that up, it wouldn’t really change the performance of the boat, because frankly the boat’s out of the water most of the time.

Have we seen a foiling tack yet?
Close. Very close. And the next stage will be the guys moving the wind through the jibe, so just as they were doing the roll tacks last time, you’re going to see some roll jibing, just like dinghy sailing. I think we are really at the start of a developmental cycle; we’re in the baby phase of this. Everyone says there’s been a lot of work done, and there has, but we’re still in the baby phase of learning how to sail these boats effectively and I think we’ll see some massive advances over the next two years. It’s exciting.

One of the things you’re also seeing is the difference in the skill of the sailors. You look at a team like Artemis, when they’ve got all their best sailors on board, they are pretty damn formidable. There’s been the comment coming back that it’s just a matter of putting a bunch of gorillas on the boat now. Well, maybe you’re better off with getting really fit, strong guys, but how long is that going to last? Because eventually all the teams will have fit, strong guys, and then it will be down to who has the best sailors of those fit strong guys.

Returning to the forthcoming cup, you’ve mentioned the possibility of a Southern Hemisphere venue for one of the World Series events – is New Zealand being considered?
Yes it is. The structure is that each of the teams has an opportunity to host their own event. We’re reasonably confident that even if Team New Zealand do not want to stage their own, we could stage one there anyway. So we’re going through a process to see whether they want to stage it or if they want someone else to. I’m pretty confident that there will be an event in New Zealand.

What do you make of Bermuda as the choice for hosting the finals?
Clearly Bermuda hasn’t got the hotel rooms that you’d have if you were staging the event in, say, Manhattan. But what we can develop is other events around the America’s Cup, such as a superyacht regatta – and of course the J-Class regatta is taking place before the finals – which can provide a real legacy.

Bermuda is a bit like a forgotten island and they haven’t currently got the infrastructure to service large boats, but that is changing. The new America’s Cup harbour is going to create a lot of the infrastructure needed. And in terms of its location, when you look at the movement of yachts, they generally come to the Caribbean in the winter and then they move up into the northeast of America or the Med in the summer, and what’s in between? Bermuda.

Also, it’s not only about creating the facilities it’s about creating the legislation. The government is going through all the processes now about how to make Bermuda more ‘yacht friendly’ for these big boats. Currently, even the local Bermudians that own superyachts don’t keep them in Bermuda currently. Hopefully that will soon change.

Finally, what do you make of Land Rover BAR’s hopes of ending Britain’s America’s Cup drought?
Ben Ainslie has put together a fantastic team. We don’t need to even go into what a great sailor he is, his track record speaks for itself. I think he’s put together a very, very good technical team and has got a good programme running. For sure he will be one of the favourites. Could they win? Absolutely. Having said that, all six teams are in my view very, very competitive and I think of those six, five of them could ultimately go on and win the cup if they made the right decisions. I’m not going to say which ones!

"For the last 20-30 years, there has usually been two, maybe three teams, that have really had a chance of winning and I think it&rsquo;s very, very open this time"

"For the last 20-30 years, there has usually been two, maybe three teams, that have really had a chance of winning and I think it&rsquo;s very, very open this time"