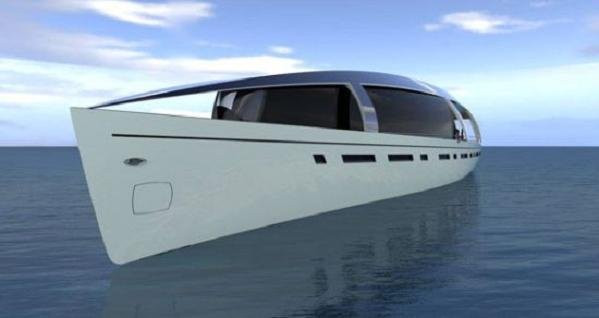 Soliloquy is a renowned revolutionary concept with an entirely eco-friendly focus set to feature at the Abu Dhabi Yacht Show later this month featuring an ultra-modern design and adaptable superstructure.

The ‘Super-green superyacht’ model has been showcased around various shows in the past, such as the Monaco Yacht Show, displayed in the Lürssen stand which drew in throws of owners and onlookers to revel in its unique design.

The elegantly crafted Soliloquy model is now set to feature at the prestigious 2010 Abu Dhabi Yacht Show which takes place in the capital's beautiful Yas Marina.

Alastair Callender designed the eco-cruiser as a 58 metre “rigid wing solar sailor” holding sails that will raise themselves from the superstructure to easily cruise the sleek design around sun-rich waters. “I am thrilled that this eco-superyacht concept will now be on show in the area of the world from which the influence first began.” Soliloquy’s influence was taken from eco-conscious Masdar City in Abu Dhabi which is currently set to become a central focus in the yachting world.

Callendar is an award winning designer and will be proudly enthralling owners and onlookers at the Abu Dhabi Yacht Show with his design's display, a concept which has stemmed from a passion for yacht design and for a sustainable planet.

Soliloquy will be propelled by solar, wind and hybrid marine power using technology from the Australian company Solar Sailor Holdings Ltd. offering the design proven ground breaking technology. Reduced running costs and zero emissions means Soliloquy will utilise the raw power of nature to give a luxurious and comfortable cruise with minimal noise and vibration.

The superstructure has an open plan design when its retractable windows come down and shows off an impressively natural aesthetic when sealed. The exterior design of Soliloquy holds 600 sq metres of solar surface coverage, allowing her to run at 8 knots after a day's charging, with the panels also doubling up as a black gloss finish.

The super-green concept of Soliloquy has received attention from global press companies such as The New York Times, The Sunday Times and CNN due to its unique design and Solar Sailor Technology.

The Abu Dhabi Yacht Show will be taking place on the 25 – 27th of this February and will feature the revolutionary design to be appreciated by any and all.

Alastair Callendar
By B. Roberts