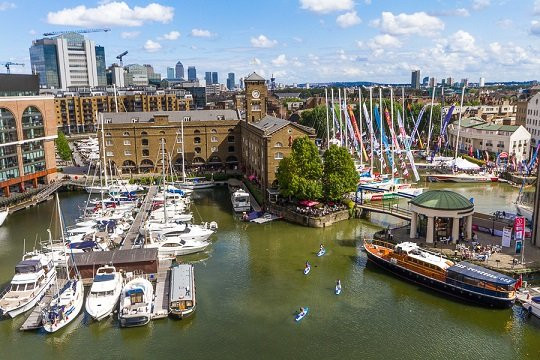 In a significant new appointment, Camper & Nicholsons Marina is set to take over the management and renewal of St Katharines Docks, London.

The historic docks, located by Tower Bridge and the Tower of London, are due to undergo a careful refurbishment and restoration programme which will see the marina re-launched later this year under the Camper & Nicholsons brand, with 170 new berths with a max. LOA of 40+ metres.

Since acquiring the site in late 2014, Blackstone has ensured the continued evolution of St Katharine Docks as one of the capital’s most vibrant business, retail and leisure destinations. A key part of the ongoing works programme is the restoration of the marina, and C&N Marinas were commissioned to conduct a detailed audit and put together a proposal for its refurbishment, leading to its full management and operation.

Dan Hughes, Business Development Director at Camper & Nicholsons Marinas commented: “We have worked closely with Blackstone on a new vision for the Docks, to develop a genuinely international marina as part of a thriving waterside community in the centre of one of the world’s greatest cities. The plans include an improved marina layout and berth plan, better facilities both ashore and afloat, and an overall improvement to the marina experience.”

Sean Purdy, Marketing Director at C&N Marinas commented: “The vision for the marina is for it to become a thriving hub of yachting and social activity for London - ‘the capital of the world’. As this 24-hour city adapts to the needs and demands of its ever-growing international business population, we see St Katharine Docks being at the heart of that.”

Guy Rudd, Managing Director of Blackstone Property Management added: “We are delighted to be working with Camper & Nicholsons on the rejuvenation of St Katharine Docks. As well as being an important cultural destination and Central London’s only marina, the docks is a prominent mixed-use community featuring modern and unique office space, luxury homes and quayside dining and shopping. This partnership will further enhance the business and lifestyle offer at the Docks, so that we can continue to attract leading occupiers.”

He went on to say: “As a key London landmark, St Katharine Docks holds appeal to yacht owners, affluent travelers, discerning Londoners and visitors, and progressive companies alike. The quality of the marina is integral to the appeal of the Docks, and the waterfront is being enhanced with an increasingly diverse range of quality restaurants and retailers, while still retaining its historic charm.”

In addition to starting operation in the city of London, Camper & Nicholsons are also creating an entirely new marina in Cowes on the Isle of Wight. Located on the eastern side of this most iconic of yachting harbours, the marina at Victoria Quay is scheduled to open in the summer of 2017 and will be a key contributor to the regeneration of East Cowes.