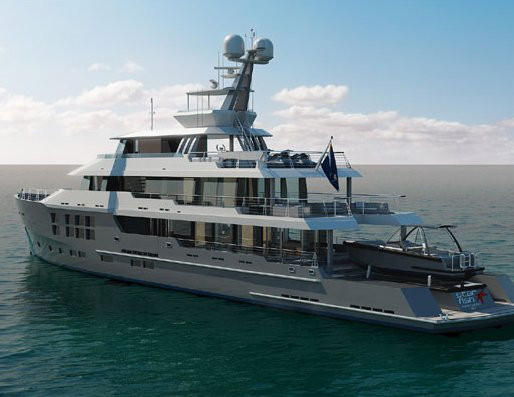 StarFish Back On The Market After Fire at McMullen & Wing

Three months ago, a midnight fire swept through the McMullen & Wing shipyard in Auckland, New Zealand and damaged the construction of StarFish. Now, the 50m sistership of BigFish is being reintroduced to the market by her owner and builders.

The early-morning blaze, which began accidentally in August just outside the three-quarters-completed yacht, quickly spread inside the forward part of the yacht until the fire crews finally extinguished the flames. The fire destroyed the parts of the yacht’s interior that had already been installed, particularly the nearly-completed crew quarters, but it left the aft portions of the yacht virtually untouched.

Richard Beattie, who originally commissioned the project, said the decision to withdraw was painful and heart-wrenching. “Everyone involved with the project knows how much energy, how much creativity went into her vision, design and creation. Ultimately, it was a financial decision. As many in the industry know, I am also the owner of Big Fish, which after more than 60,000 nautical miles is now undergoing a refit McMullen & Wing in her birthplace of Auckland, New Zealand. In January she will resume her record-breaking charter and cruising schedule in the South Pacific and shortly thereafter in Southeast Asian Waters. It was never my intention to own two large yachts, and given the additional time and financial resources that would be required to complete StarFish, I have decided to give another owner the opportunity to carry forward with her completion.”

Beattie said that his loss can be another’s gain. “I can confidently say a new owner will enjoy dramatic value and extraordinary enjoyment from breathing life back into this project. Since her launch 30 months ago, Big Fish has become the most travelled; most chartered and most applauded yacht in the world, a pedigree that will also belong to the next owner of Project StarFish.”

A new owner can choose whether or not to take advantage of the existing design and development, or to chart a new path in styling and/or interior design to create a completely bespoke custom yacht. With so much technical work already complete, the new yacht could be completed in as little as 18 months and delivered at a discount of as much as $9m on equivalent new build cost.