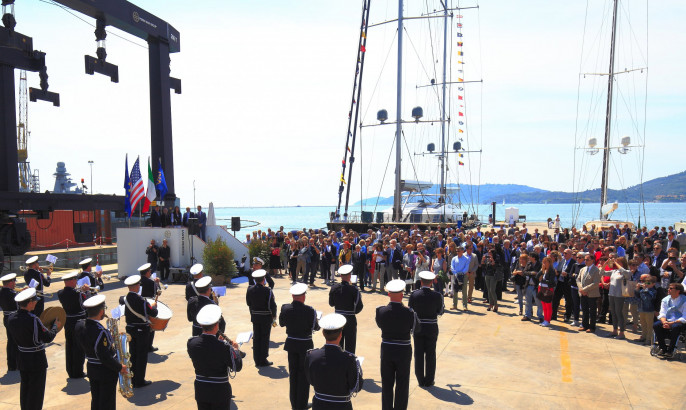 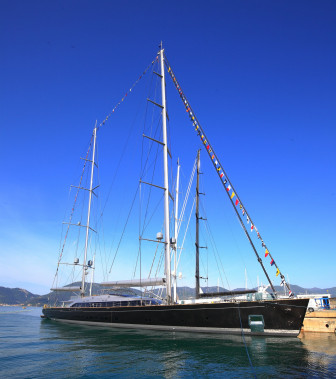 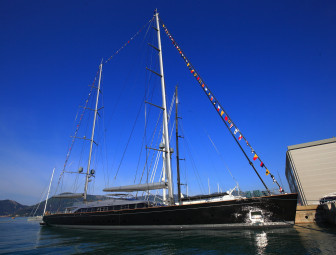 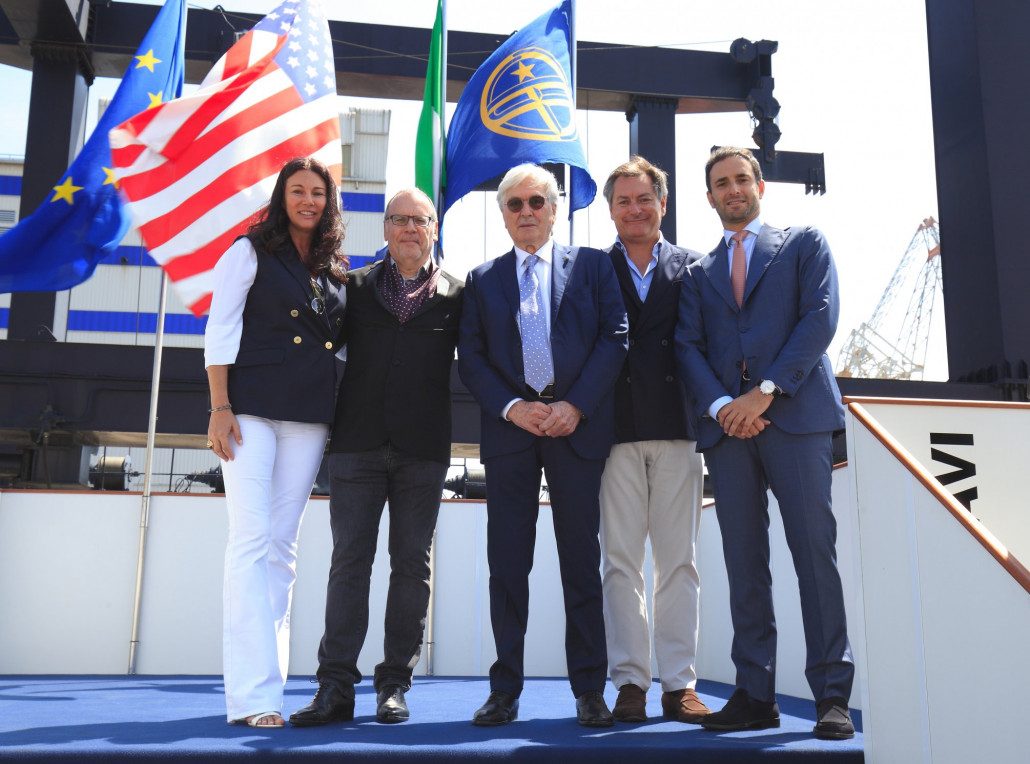 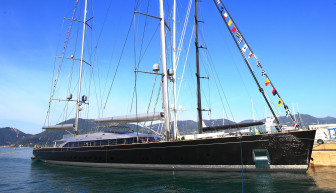 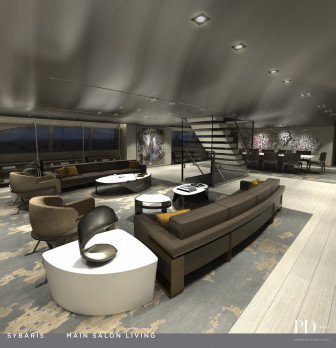 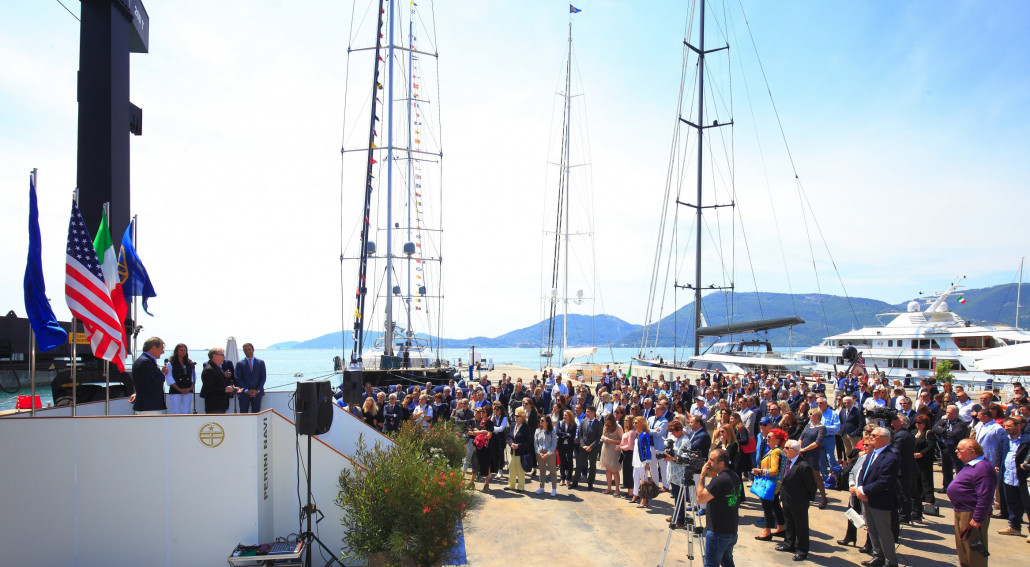 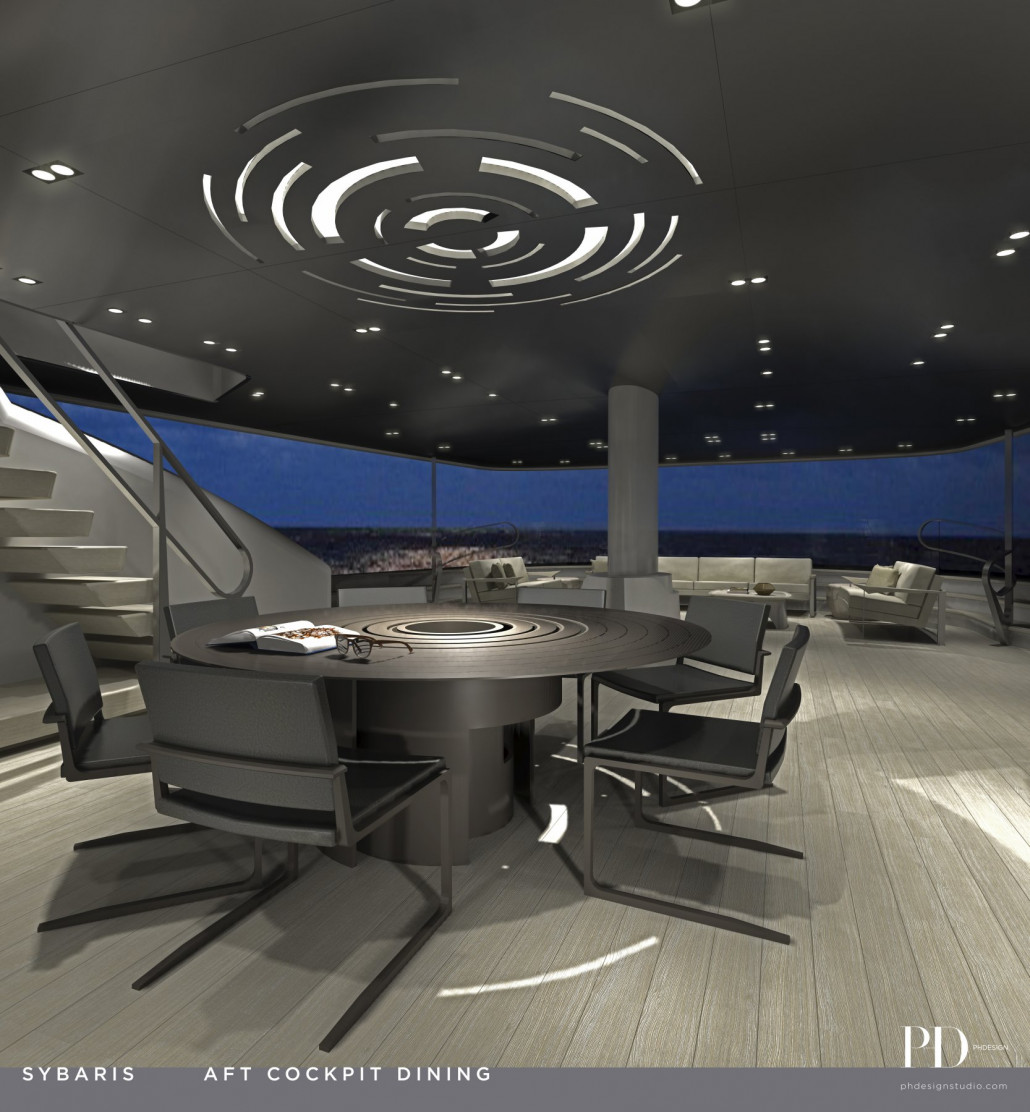 The launch of a new yacht often signifies the realisation of a dream. For Bill Duker, that dream is 20 years in the making. From the days of sitting with his son drawing their dream yacht, to working with the finest designers and builders to make it happen. This is Sybaris, one man’s dream turned Italy’s largest sailing yacht.

Shortly after her technical launch and mast stepping operations, we arrived at the Perini Navi Group’s Picchiotti shipyard in La Spezia to step on board the 70 metre ketch during her official launch ceremony.

This is Perini Navi’s most advanced project since the creation of the Maltese Falcon, which was launched at Perini Navi's Turkish facilities in 2006 and still stands as their largest yacht to date.

The subtle nature of Sybaris, even with her imposing 72 and 61 metre main and mizzen masts, is astounding. The performance under sail has the makings of a cutting-edge classic, and the resounding core of her creation is to house art, while becoming a masterpiece herself.

“We wanted to build a boat that combined great art in the interior, put it in a setting that the interior of the boat itself was a piece of art, and then set that interior within a superyacht that was also a masterpiece. Not only a masterpiece of beauty, but a masterpiece of performance.” Explains Sybaris Owner Bill Duker during the ceremony.

Style & Performance
Drawn by the Perini Navi Technical Design studio, with considerable input from Bill Duker's team, Sybaris is sleek, sculpted and a notable evolution of the Perini Navi style with a less pronounced sheer line and more vertical bow.

Philippe Briand’s extensive experience was injected to optimise the naval architecture and make the most of the incredible 5,842m2 sail plan. This pedigree combination of designer, builder and architect has created a comfortable and stylish vessel which brings sailing back to the hands of the owner through cutting-edge technology..

A first for Perini Navi, Sybaris is equipped with two variable speed generators that supply power to the ship’s main grid, and stores excess energy in battery packs. This technology makes Sybaris a silent runner, allowing those on board to navigate and use battery power for hours without the smells and sounds of the diesel generator.

“As Perini Navi’s second largest sailing yacht launch to date, Sybaris raised numerous technical and aesthetic challenges,” says Burak Akgül, Managing Director of Sales, Marketing & Design. “But where there’s a will there’s a way, and the result is a uniquely beautiful sailing yacht that pushes the boundaries of design in every conceivable way.”

Life Under Sail
On deck, Sybaris provides an unprecedented amount of space. Her giant fly bridge measures up to 117m2 and reflects the truly sophisticated lifestyle inside and out. The exterior spaces lead seamlessly into the interiors, with PH Designs imbuing the yacht with an effortlessly cool demeanour in what is the studio’s first ever yacht project.

Titanium is a running feature throughout the yacht, formed by specialist craftsmen - brought in from the world of F1 - to create everything from exterior railings, leading into the striking interior ceilings and fixtures found across Sybaris.

The interior itself, matches the style and demeanour of Sybaris perfectly. The open plan-layout provides unbroken space which is filled with custom-designed furniture, storage and decorations which provide a clean, modern style that acts as a muted backdrop to the bold works of art from the owners private collection, set to be installed in the coming weeks.

Instead of built-in credenzas, for example, the 151m2 main salon features sculpted pillars milled from solid titanium to support ‘floating’ travel trunks clad with alligator skin. “The effect is modern with a remote reminiscence of Old World travel,” says founder of PH Design, Peter Hawrylewicz. “The allure lies in the confluence of these two temperaments.”

A dramatic sculptural feature is the central staircase leading down to the lower deck and up to the fly bridge. Made of titanium with glass balustrades and treads of bleached American oak, the Class-approved laminated glass panels alone weigh over 600 kg each, requiring reinforced beams fore and aft of the stairwell to support the structure.

To blur the boundary between the inside and outside environments, the titanium ceilings panels in the main salon continue through the glass sliding doors into the aft cockpit and softly bounce the illumination from the LED lighting recessed within.

The same reasoning has been applied to the flooring, where the extra-wide planks of teak in the cockpit are mirrored in the oak floorboards of the main salon. This is just one area which perfects the theme of the minimalist materials used, principally titanium, bleached oak and Bianco Assoluto marble with hints of bronze in the custom-built furnishings.

This is a yacht built for the pursuit of pleasure, with each design and construction party working under the vision of Bill Duker, who commented: “It’s been for me more than a creation of a high performance yacht, more than the creation of a beautiful piece of art, it’s been the thing that’s bound me and my son.”

We look forward to bringing you more on the interior of Sybaris in a dedicated interview with her designers, more about the journey of Sybaris’ creation and a closer look on board during her debut at the upcoming Monaco Yacht Show in September.