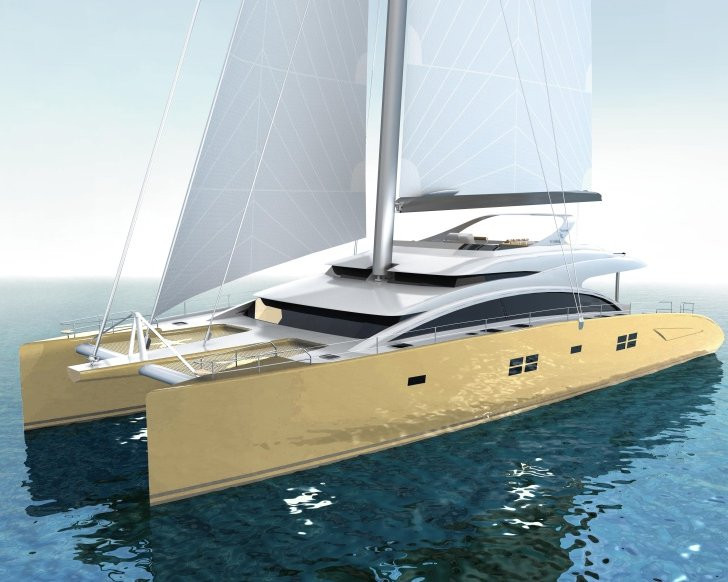 Following the successful launch of two catamarans over 100’ in 2010, Sunreef has now announced the commencing construction of a 82’ double decker sailing catamaran.

Featuring sleek hulls and a streamlined deckhouse topped with a giant 35m2 flybridge inspired by the largest motor yachts on the water, the Sunreef 82 DD is now scheduled for construction with the artisan catamaran builders from Poland.

The Sunreef 82 DD is being built for a European client who was impressed by one of Sunreef’s latest catamarans, Ipharra, previously launched in 2010.

“This sale was concluded thanks to Sunreef’s well-proven capabilty to build large custom yachts for demanding owners and according to the highest construction standards,” explains Francis Lapp, CEO of Sunreef. “The last few years of simultaneous construction of the two mega catamarans have given us invaluable experience that we will strive to improve with the Sunreef 82, our first superyacht built of composite materials.”

The design’s layout includes a number of unique elements, such as a large, bright saloon, an internal helm station with sea views and a smart mezzanine floor housing a coffee table with a loung area on the starboard side of the main deck with accommpanying dining table.

The Sunreef 82 has been designed with integrated stepped hull chines to increase interior space, whilst simultaneously increasing performance. Her interior can accommodate up to seven guests in a spacious, full-beam owners cabin, one VIP queen cabin and one twin cabin with Pullman birth.

The owner suite, arranged over two floors, is set to occupy the entire forward section of the yacht with a master cabin, Jacuzzi and gym on the main deck, and wardrobe and floor-to-ceiling storage and bathroom located below decks in port and starboard hulls respectively.

The right corner of the master cabin includes an LED-lit Jacuzzi set on a two step platform, surrounded by an orchid jardinière, providing amazing sea views through beam-wide 180 degree panoramic windows. The treadmill, integrated within the floor, is positioned in the centre and a low Japanese-style king-size bed with two night tables occupies the left part of the suite.

The Sunreef 82 DD superyacht will be built of light high-tech composite materials that the shipyard introduced to construction in 2007, and is scheduled for launch in June 2012.