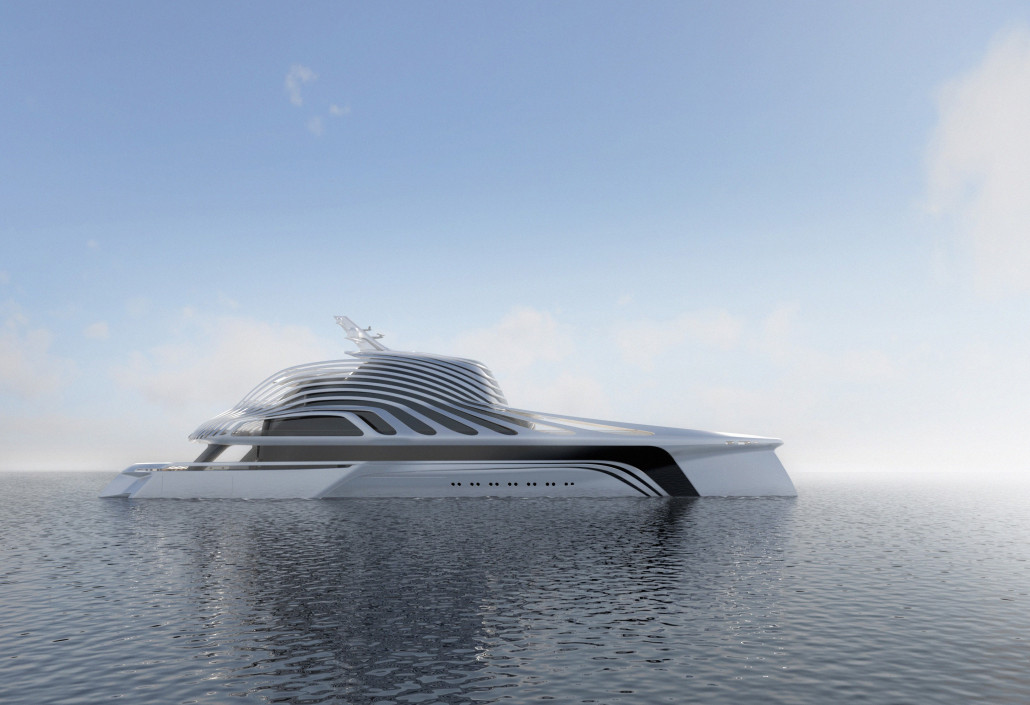 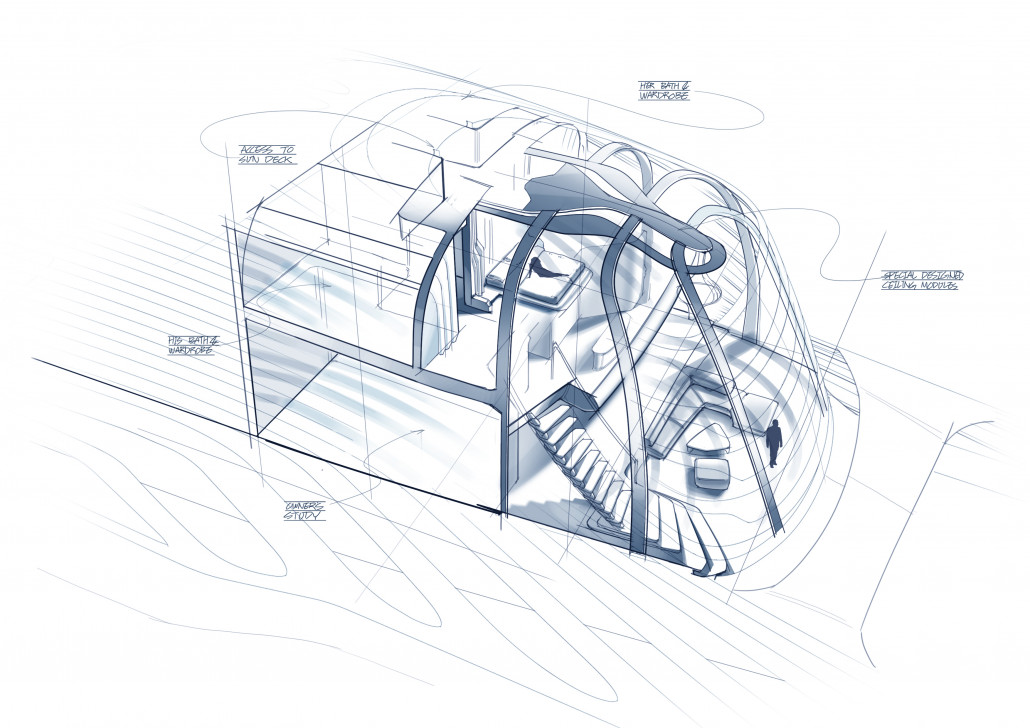 Meet the incredible superyacht concept, neWWave, created by South Korean superyacht designer Jaehoon Ahn as a part of his university degree. In an experimental study on the design of naval platforms, Ahn says “I decided to explore the modern architecture trends behind the use of space onboard yachts”, and from this study of space he drew up designs for the unique and powerful neWWave yacht concept.

Traditionally, yachts are designed to be low and sleek, so as to be as aerodynamic as possible in order to optimise speed and performance. “I wanted to explore the ways in which going against this traditional design could change the interior spaces,” says Ahn. He decided to manipulate ceiling heights, diversifying them and creating tall light spaces and double height atriums, as well as using sunlight and shadow to create different shapes and frames throughout the yacht. Ahn’s aim was to combine these features to “escape the typical wedding cake structure” of superyachts.

Ahn’s designs were heavily influenced by Islamic culture, particularly models from the Parisian Islamic Museum, as well as the sophistication of modern Japanese architecture. Ahn was also inspired by the work of architect Zaha Hadid which Ahn describes as “limitless in its imagination and organism.”

The Middle Eastern influences, Ahn says, were chosen so as to “maximise the effectiveness of diverse ceiling height of spaces and unique mood from framed windows. Their unique patterns and religion-based lifestyle significantly influenced the interior flow and defined key areas.” For Ahn, the 8-metre-high mosque at the centre of the yacht is the highlight of his neWWave design; “Even though it is a narrow and empty space solely for praying, with the modern Arabic pattern and unique shaped exterior window frames the space becomes much more than just a room – it becomes a sacred and safe place in the middle of oceans.”

The interior of neWWave is beautifully intricate in its design and in its character and for Ahn, the interior is one of the most important aspects of yacht design; “Performance is always essential. However, lifestyle is the reason why people want to have a superyacht.” Ahn says that he wanted to show through his unique interior and use of space and light “the completely different possibilities that can be created in terms of lifestyle with radical design items. In this way, I hope to broaden perspectives and therefore broaden industry trends.”

Ahn believes that there is more to be explored by looking more closely at lifestyle and luxury as opposed to performance when it comes to yacht design; “In this project, I took a common architectural feature of creating "higher space" and applied it to yacht design, and the conclusion was radical.”

Ahn concludes our interview with a remarkable statement on his view of the future of yacht design, which stands as a call to defy traditions and break the rules by taking inspiration from all that is around us; “I don't want to say superyacht design needs to be influenced by architecture, but we can be inspired by anywhere in the world. It could be fashion, it could be a product or a piece of art. In the future, I'm sure the superyacht industry trends will continue to diversify and become more adventurous in its trends and designs.”

"In this project, I took a common architectural feature of creating "higher space" and applied it to yacht design, and the conclusion was radical."

"In this project, I took a common architectural feature of creating "higher space" and applied it to yacht design, and the conclusion was radical."