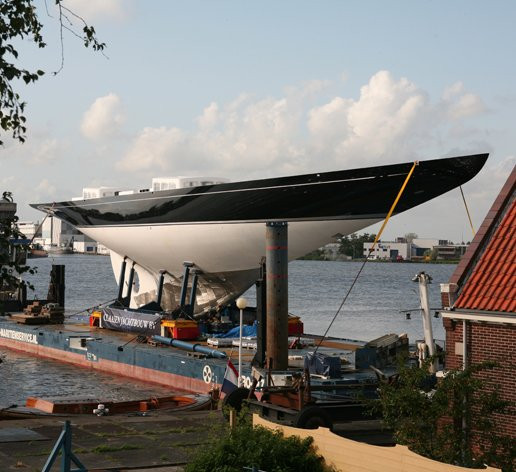 Standing at 44m long with an astonishing overhang of 17m, Lionheart is the largest J-Class in the world. YPI Brokerage, the sales and new construction division of the Monaco based Yachting Partners International, have signed Lionheart for sale alongside Hoek Brokerage.

William Bishop, YPI broker and head of the YPI sailing division, said “This is an amazing moment … Lionheart is quite simply stunning. Anyone who loves sailing is already aware of the philosophy, the history, the technology and the passion that has gone into the construction of Lionheart. That’s what makes this the beginning of a whole new era of J-Class yachting.”

Built to compete at the highest level, Lionheart was originally designed for the Ranger Syndicate by Starling Burgess and Olin Stephens in 1936. Her design was then extensively evaluated and optimised by the Hoek Naval Architects to ensure the highest quality of racing.

“And she is just as much designed for cruising as she is racing,” Will points out. “She has been built to MCA Classification and incorporates two small deckhouses and two small cockpits for the owner and his/her guests – that gives extra versatility on how the yacht can be used whether racing or cruising.”

Alongside her expert construction, her racing capabilities benefitted from the wealth of experience added to the project by Hall Spars in the building of her spars as well as utilising Harkens proven Carbon winches.

William Bishop added “Lionheart is very competitively price … She represents a unique opportunity today for an owner looking for performance but with the added versatility of an intelligent cruising configuration. Lionheart is a new breed of J-Class and we are very proud to be representing her for sale alongside Hoek Brokerage.”

"She represents a unique opportunity today for an owner looking for performance but with the added versatility of an intelligent cruising configuration."

"She represents a unique opportunity today for an owner looking for performance but with the added versatility of an intelligent cruising configuration."