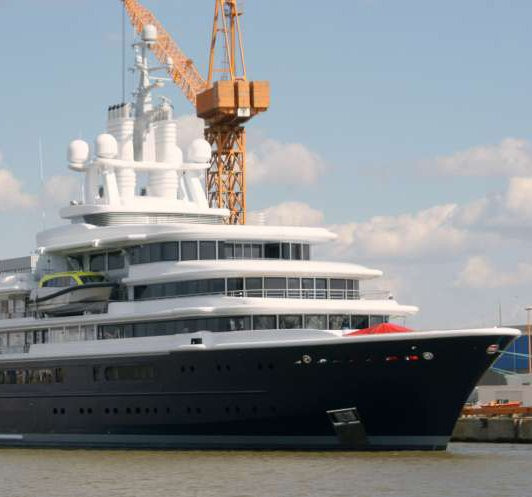 Luna, the world’s largest exploration yacht has been undergoing sea-trials, outfitting and major paint works in preparation for delivery to her owner, rumoured to be a prolific superyacht owner. Luna has been kept so top secret, there is even less information about her than the Eclipse.

The 115m long range expedition yacht Luna was built in Germany by Lloyd Werft and Stahlbau Nord Shipyards. The superyacht was launched last October, becoming the second largest yacht to be launched in 2009, after Eclipse. Luna was recently painted to give her hull a stylish navy blue finish with waterline stripes instead of her initial white, giving the awe-inspiring sea-giant a new look.

Number 19 in our Top 100 forecast, Luna's interior was designed by celebrated designer Donald Starkey with the exterior designer still being kept under wraps. The design of the second largest yacht in 2009 somewhat resembles the exterior styling of the groundbreaking Eclipse, featuring similar forward designs on the above decks. Even the names can be said to be of a similar origin.

Superyachts.com have captured images and footage of the stunning expedition superyacht Luna as she undergoes trials and sports her new paint job at the shipyard where she is currently undergoing outfitting.

Video of the Superyacht Eclipse
Footage of the largest superyacht in the world has rarely been captured, however, for the new video click here>>