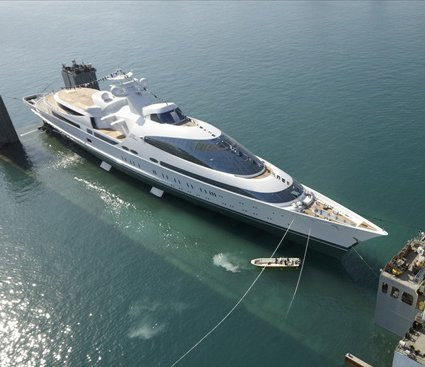 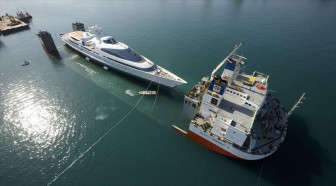 The 141m superyacht Swift141, now christened 'Yas', has been successfully launched by ADMShipyards; entering the record books as both the largest launch of 2011 and most significant superyacht in recent history.

ADMShipyards, members of Privinvest, has proudly announced the launch of their first superyacht. At 141 meters, this stunning private yacht ranks as the sixth largest superyacht in the world.

A dramatically beautiful vessel of unique design and styling, at her launching she was officially named Yas.

Yas was styled inside and out by Pierrejean Design in Paris, with a strikingly graceful exterior of fluid curves and volumes, and a spectacular structural covering of glass. She can comfortably accommodate up to 60 guests while modern diesel power and variable-pitch propellers assure a top speed of 26 knots, cruising speed of 20 knots, transoceanic range, and “green” fuel economy. In anticipation of her unusual speed for a yacht of this size, the project was first appropriately named “Swift141.”

At the recent launching ceremony, Johan Valentijn, Privinvest Executive Board member and Industrial Manager in charge of the project, said: “Our international team of experts, subcontractors, and suppliers has accomplished one of the great challenges in modern yacht building, and set in place a major milestone in shipbuilding technology and art that will be difficult to surpass.”

Yas’s performance derives from her well-proven, fast and manoeuvrable hull, which was adapted from a UAE Navy frigate. She has many technical and aesthetic features that enhance her singular character. Her relatively narrow beam lowers her resistance through the water and adds grace to her shape. Her superstructure is the largest composite object of its kind ever built. Her automatic stern platform and outdoor pool/spa offer great convenience while her garage for stowing “toys” has a carbon-fibre door that serves as a boarding/swim platform. Dual bow and single stern thrusters allow Dynamic Positioning for her crew. For safety and convenience, Yas is equipped with advanced radars, SatCom, long-range underwater Sonar, FLIR and high-definition day cameras, and Night Navigator. The audiovisual entertainment system is the most extensive and sophisticated aboard any yacht.

Yas is built under Classification by Det Norske Veritas (DNV), to ensure that the highest international structural, safety, and operational standards are met; she is the first yacht ever built to meet requirements of the new UAE Large Yacht Code created for private vessels.

In addition to ADMShipyards, Privinvest shipyards include: CMN (France), Nobiskrug (Germany), HSY (Greece), and ADM Kiel (Germany). They have together delivered more than 1,600 vessels, cover more than 1.5 million square meters, employ more than 2,500 people, and have a current order book of commercial, military and luxury vessels exceeding 2.7 billion Euros.