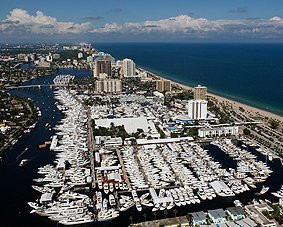 The 51st Fort Lauderdale International Boat Show opened today with key industry representatives noting recovery in the superyacht market and the importance of the event.

The 51st edition of the Fort Lauderdale International Boat Show (FLIBS) opened its doors to press and public today, showcasing a wide array of boats, superyachts and exhibitors from around the world.

The first event on the schedule was a conference to introduce the show and give the opportunity for key speakers to note the strength in the Florida marine industry and the growth of the superyacht sector.

Jack Seiler commented, “This Boat Show will remain in Fort Lauderdale and will remain in this location as long as we have control over it … the marine industry is strong here.”

Alongside legislative speakers such as Jack Seiler and Ron Klein were representatives from key industry players in the superyacht market. Marcel Onkenhout, CEO of leading Dutch shipyard Oceanco, noted on the growth opportunities within the superyacht market, saying, “we are out of the crisis and on the way to recovery … 2009 was a low point for enquiries, but in 2010 we’re making up for lost time.”

CEO of Rybovich Superyacht Marina & Refit Facility, Wayne Huizenga, Jr., added “2009 was a difficult time for the entire world, why would it be different for the superyacht industry.”

Wayne Huizenga, Jr. added further comment on the importance of the yacht manufacturer being the heart of the industry, “180,000 people are working in Florida because of the marine industry.” Yacht manufacturing creates thousands of job opportunities, using the example of Oceanco’s last project, which had 750 people working on the yacht. “Fortunately there are wealthy people who help to create an entire industry.”

Huizenga, Jr. continued, “The market is stabilizing – that’s the positive part – but we need to do more. We need to remind people of the unique experience of being on the water.”

These key speakers heralded the 51st Fort Lauderdale Boat Show as an imperative tool to further the yachting industry; giving brokers, designers, manufacturers and superyacht owners the opportunity to exhibit in one of the most vibrant and popular superyacht events of the year.

Superyachts.com will be bringing you the news from the 51st Fort Lauderdale International Boat Show as it happens.