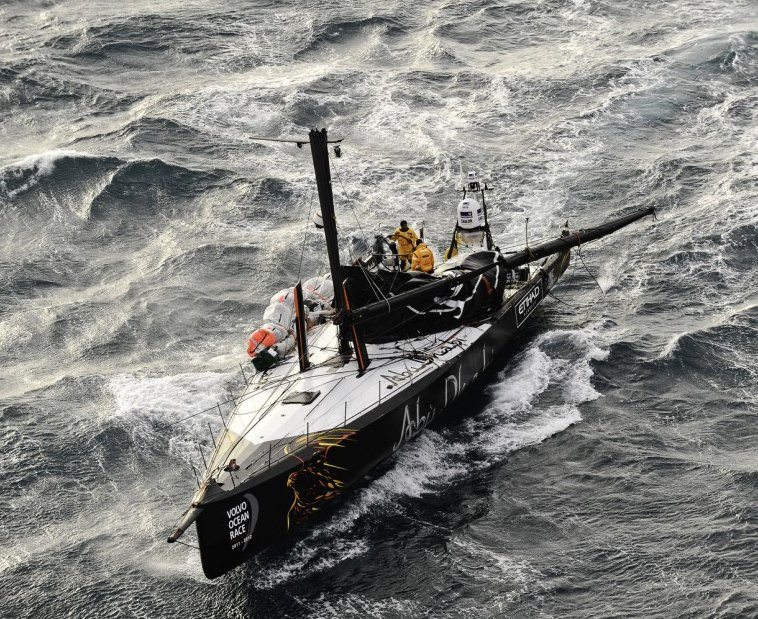 The team, led by British double Olympic silver medallist Ian Walker, hit trouble just six hours and 85 nautical miles into Saturday’s Leg. But after returning to their Alicante base, and undergoing a rapid mast change, the team have once again set sail in their quest for glory.

With Abu Dhabi left chasing the pack, Team Groupama have surged into the lead after the bold move of splitting with the fleet and sailing a more direct route close to the African shoreline. The left-field tactic paid off and Franck Cammas’ crew extended their lead to 87 nautical miles at time of writing.

Abu Dhabi will be hoping to narrow that lead in the coming days, and skipper Ian Walker was typically phlegmatic when talking about their prospects.

“I wish I could say we were now racing with clear minds but we are not,” Walker wrote in the team’s official blog prior to resuming racing.

“It is not normal practice to step a new mast and set off in the dark and straight offshore – new masts can sometimes take days to tune up but we don’t have that time.

He continued: “We also don’t have the safety of a spare mast waiting for us if anything goes wrong. The stakes are now very high and we must sail accordingly. Right now we are taking it one step at a time. We will not sail fully loaded tonight until we can check everything in daylight.

“Just like falling off a horse it takes time to regain your confidence but you simply have to get back on it as soon as you can. For now I am going to enjoy sailing with a full moon and clear skies and we will start to find Azzam’s rhythm again.”

Around 450 nautical miles to the north west of Groupama, Team Telefónica were this morning in second place, with PUMA Ocean Racing powered by BERG in third. CAMPER, currently in fourth, had slipped to 173 nautical miles behind leader Groupama.

Taking place over nine months, the Volvo Ocean Race is considered one of the most gruelling sailing events in the world. The teams are due to arrive in Abu Dhabi for the second Leg of the event on January 1st.