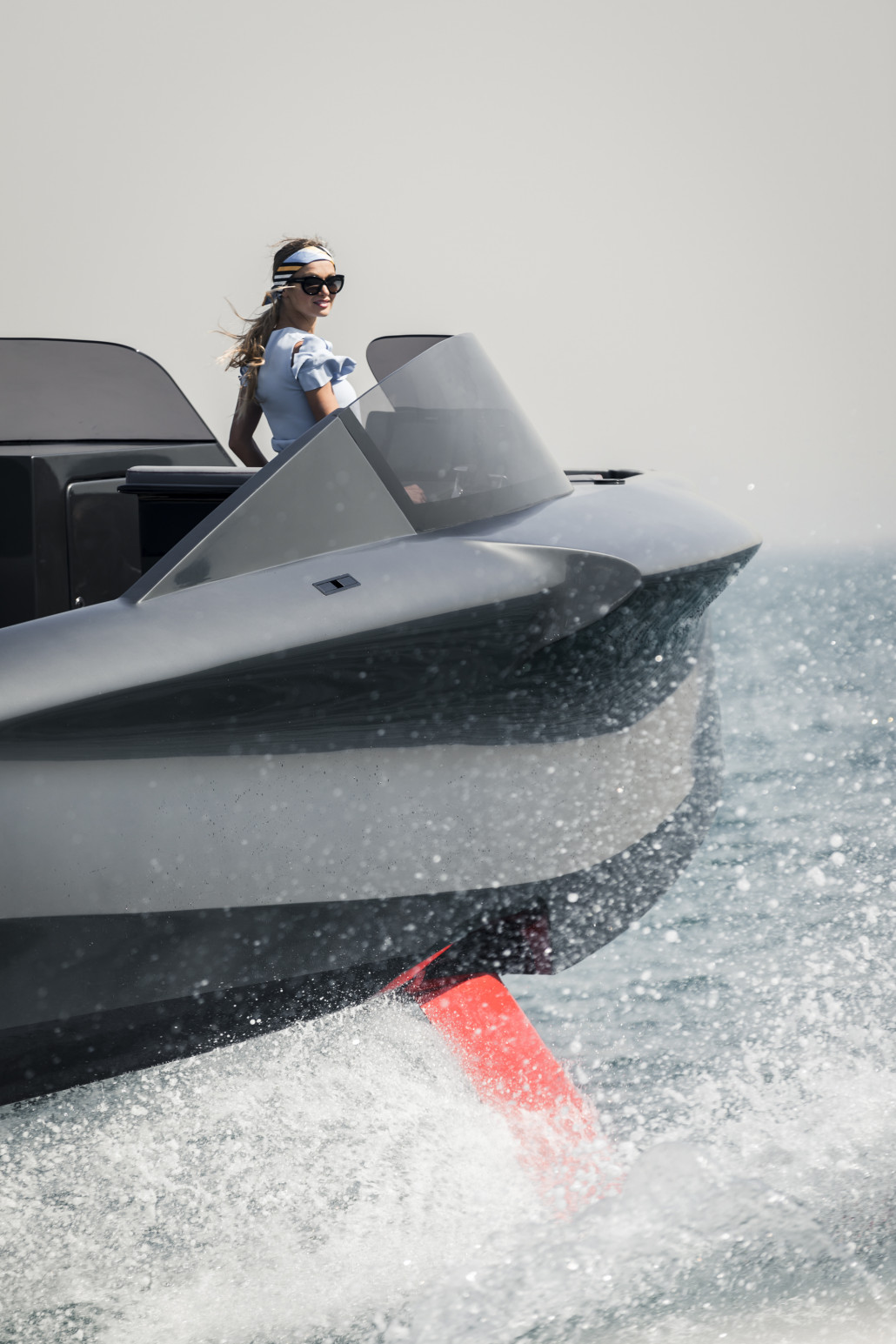 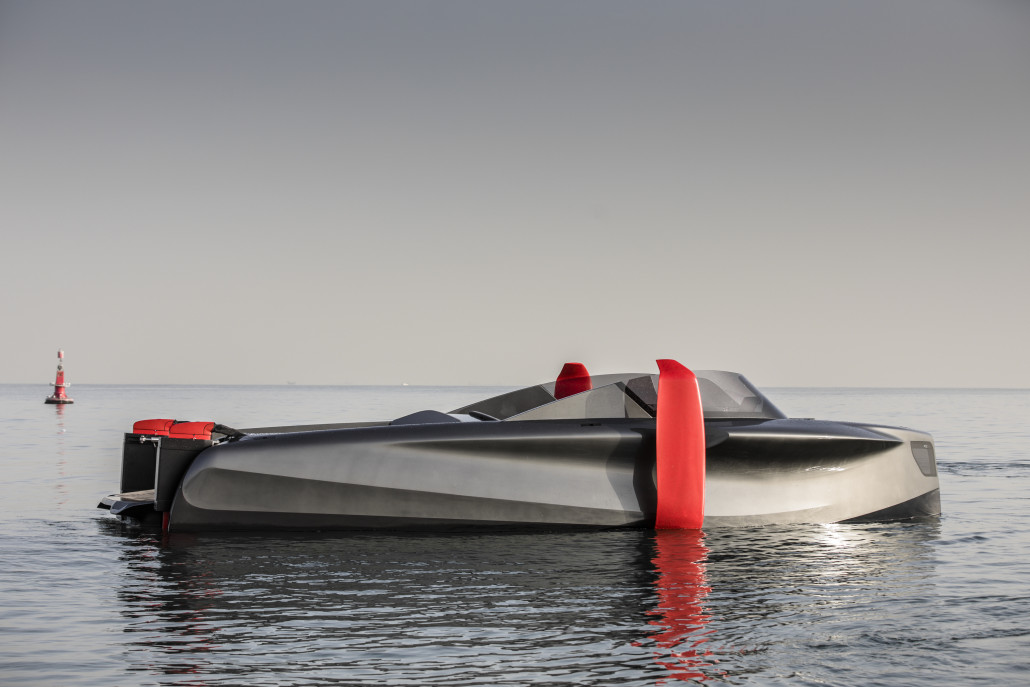 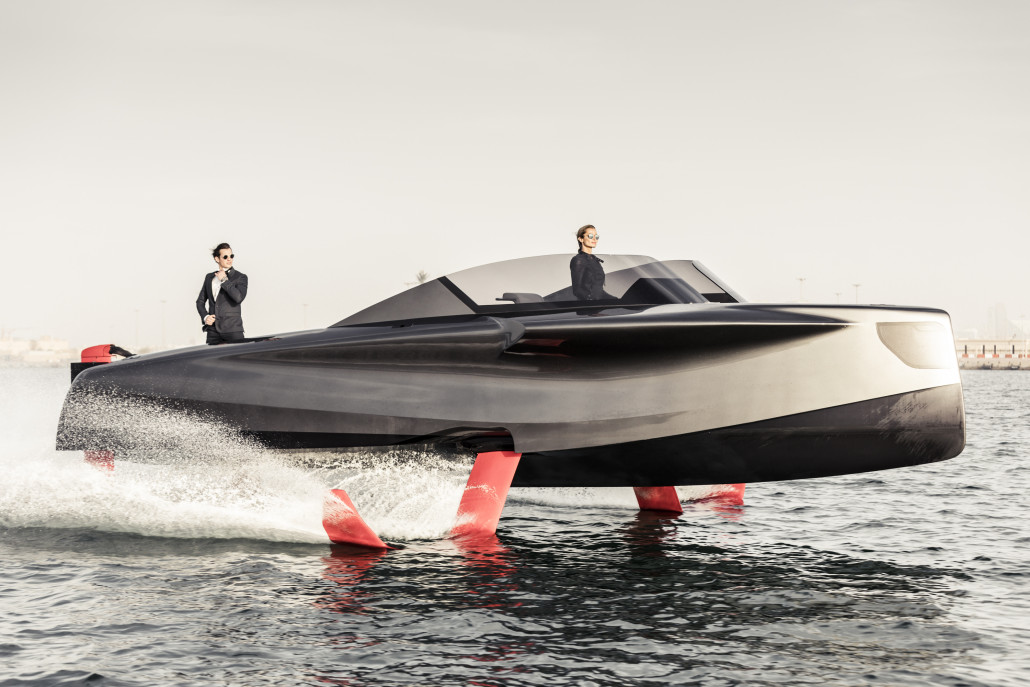 The 'Foiler', a new production boat which uses foiling technology to achieve high speeds in comfort whilst offering fantastic fuel efficiency, is available for sea trials in the Med this summer.

The futuristic boat, which was debuted at the Dubai Boat Show in February this year, will have a permanent berth at the Yacht Club de Monaco and Saint Tropez from mid-July 2018 until the beginning of the show season. The boat will be available for media and client sea trials during this period with the manufacturer, UAE-based ENATA Marine, anticipating that it will "wow the French Riviera."

The 10-metre vessel has already been proven to have outstanding fuel efficiency in previous technical sea trials - ENATA Marine says she is "about 20 to 50 per cent more fuel efficient than other yachts". Able to rise onto the foils at just 12 knots, the boat completely clears the water at 17 knots and is able to achieve a maximum speed of 40 knots in flight mode. Rising onto the foils happens at the push of a button and takes mere seconds.

ENATA Marine is keen to emphasis the Foiler's outstanding seakeeping qualities - it has been proven to navigate through waves of up to three-metres with ease. A smooth take off and landing process are all part of the boat's appeal with minimal wake, low noise levels and reduced sea sickness are all additional benefits.

Alois Vieujot, manager at ENATA Marine, says the Foiler is "extremely stable and safe, like a flying carpet over the ocean... The feeling is of total comfort and tranquility. Going back on a regular motor boat really feels like going back in time”.

ENATA Marine is not the only company making production hydrofoils with Quadrofoil, a Slovenian company, offering a range of electric two-man foiling vehicles which are smaller than the Foiler and more suitable as toys rather than a tender. Nevertheless, the company has grand ambitions, and envisions a world where "green technology will no longer be considered as technology of the future, but the standard for all new innovations and products to come."

"You don’t have any movement from the waves underneath as you are above them. It is extremely stable and safe, like a flying carpet over the ocean. It also eliminates sea sickness. "

"You don’t have any movement from the waves underneath as you are above them. It is extremely stable and safe, like a flying carpet over the ocean. It also eliminates sea sickness. "