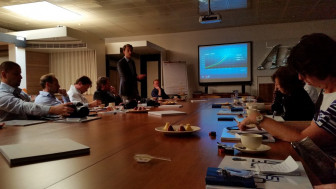 The 2014 HISWA Press Tour has yet again proven itself a vital asset to the media arm of the superyacht industry and a strong spokesman for the Netherlands. The week started with a trip to the revered Feadship yard in Makkum, leading us all around Holland with much more still to come.

After we'd had a chance to walk around the brand-new 92 metre superyacht and the 44 metre motor yachts at Feadship, the team of journalists were then introduced to a very Urk experience thanks to the skilled craftsmen at Piet Brouwer and Balk Shipyards.

With a 65 metre in construction, Balk Shipyards had a reason to celebrate, and chose to do so by walking us through the yard before taking us on a cruise around the Urk island in a classic wooden vessel followed by an introduction to the amazing products of traditional fisheries.

The shipyards of Holland have always known how to make a lasting impression, and Heesen’s tour on day two proved just how good demand is. The order book is full and there are several yachts in build at the yard, all varying in size and stages of construction.

Back in 2012, Heesen announced the start of the future range at the Monaco Yacht Show, and it looks like the future is already here thanks to a string of upcoming launches, recent deliveries, new technology, fast displacement hull form developments and some exciting news on the horizon.

We took a step on board the 42, 55, 60, 45, 51 and 70 metre superyachts projects in construction at the yard, going over the finer details of the build which have provided Heesen with their characteristic style and renowned approach to engineering.

Shortly after this impressive trip, we were welcomed on board a pleasure cruising boat by Emile Bilterijst of Moonen Yachts which was scheduled to take us on a tour of the truly stunning Biesbosch reservation and give us a good chance to discuss the brand-new Caribbean range. Named after Caribbean islands – Marina, Montserrat, Matica, Mustique, Martinique and Marquis – each yacht in the range is an evolution of a classic Moonen style. “There is no future without history,” remarks Emile Bilterijst as he and his team unveil a new model for us to see.

Wednesday morning brought an interesting journey through the Oceanco facilities as we were taken around their new high-tech shed which is currently in construction. Walking past the rather distracting 91.20 metre Y709 – which is awaiting delivery this weekend – we were lead to the new shed which is capable of welcoming hulls and new build projects up to 150m as well as being able to control the climate anywhere to enhance construction capability.

However, this was after Dirk de Jong kindly introduced us to the future projects in build at the Oceanco yard. We were lucky enough to see the aft section of the Y710 (88 metres) and a sneak peak at the Y711 sailing yacht underway alongside going over the remaining projects to follow; such as the 105m Y712 Dyna Rig ‘Solar’, the 110m Y714 which is arriving at the new dock soon, the 87.20m Y715 and the 90m Y716.

After lunch with the Oceanco team in Rotterdam it was off to Amels and time to discuss Limited Edition superyachts. Stepping on board the new Amels 199 (sistership of Event) scheduled to be delivered next May; we got a unprecedented look into how this Limited Editions yacht has received the praise it has over the last year.

This Limited Editions 199 is somewhat different from her predecessor as the owner has brought the galley up to the main deck, as he likes to be close to his chef according to Victor Caminada, Marketing Director of Amels. With a Laura Sessa interior being prepared for outfitting and engineering work currently underway, this 199 is just the second of three as a new hull is scheduled to arrive soon to carry on the legacy.

Two Amels 180 sisterships were also in construction side by side at the yard and in similar stages of construction as well as two very recently delivered yachts sat outside in the rain; the 55m Serenity J set to leave on Sunday and the 65m Amels 212 named ‘Z’. Having delivered 6 yachts this spring, of which 3 were refit projects and 3 new-build projects, not to mention another 7 projects under construction - one of which is an 83 metre.

As always we were asked not to take any photos or publish anything too revealing; however, the tour is not over yet and with an interesting tour scheduled with Hakvoort, Vripack, Royal Huisman and Holland Jachtbouw before the flight back – there may be more news to come.