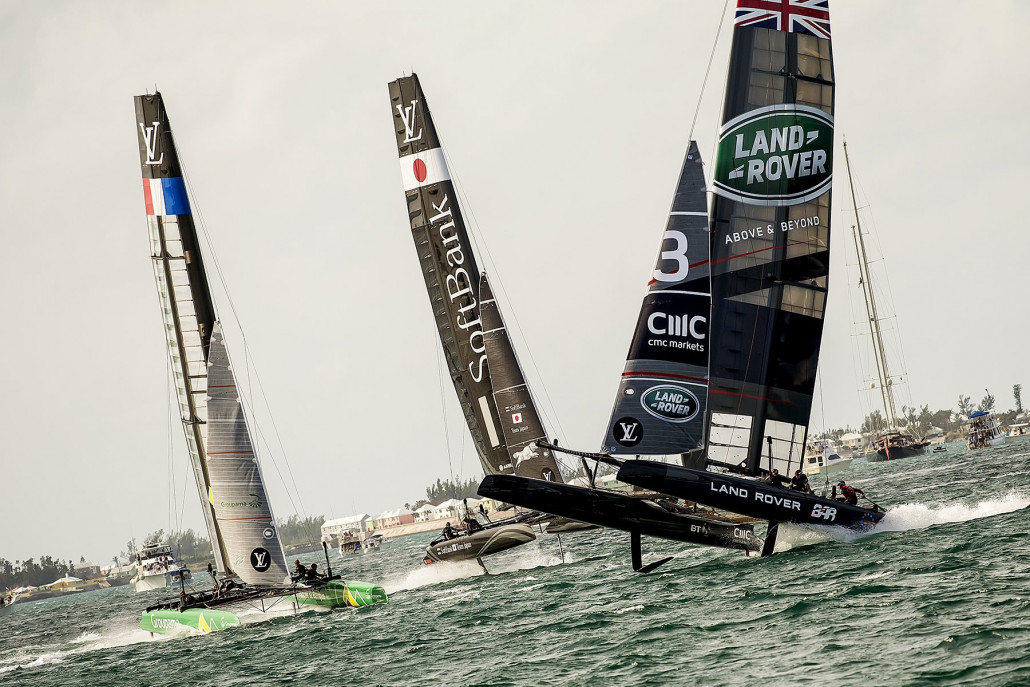 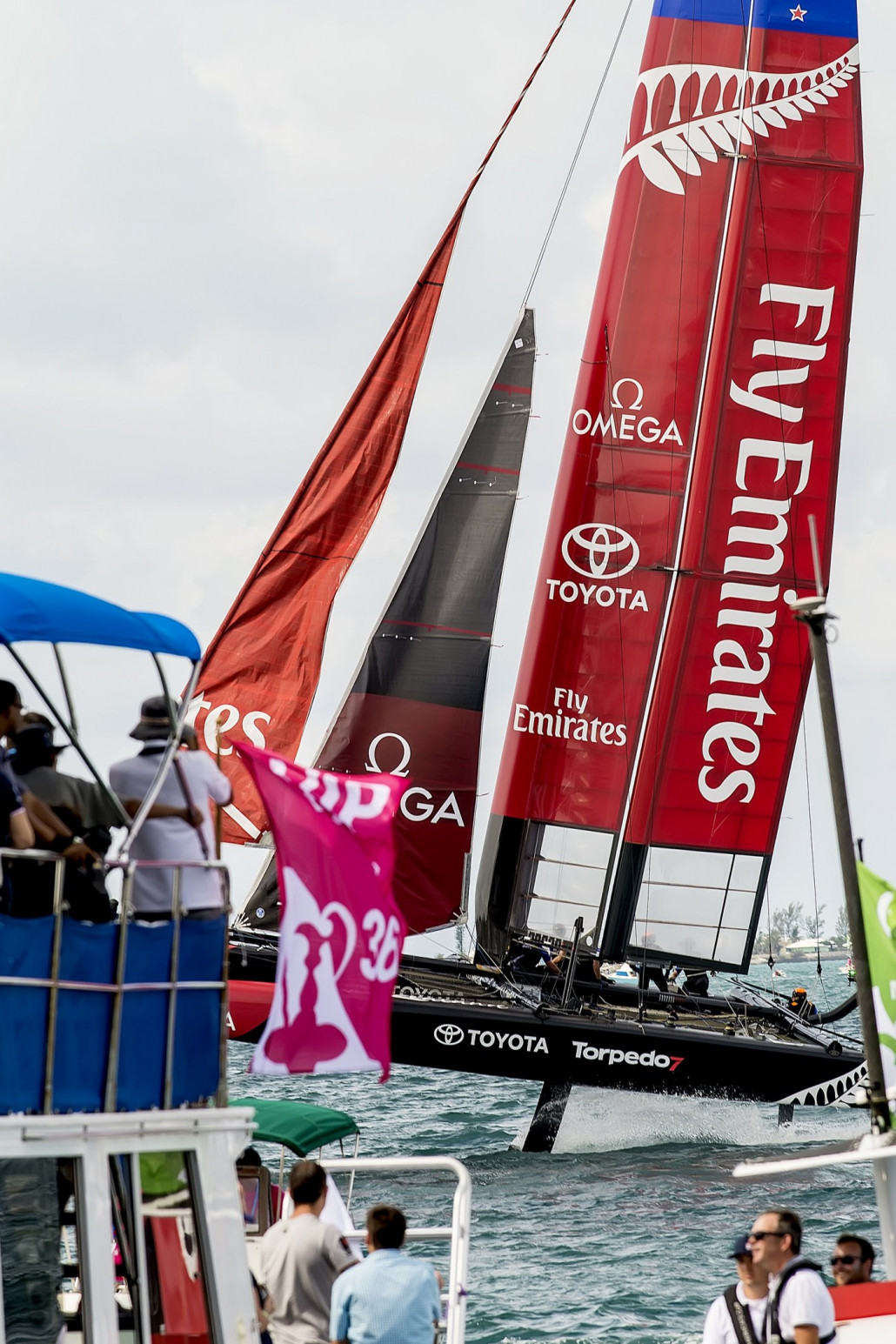 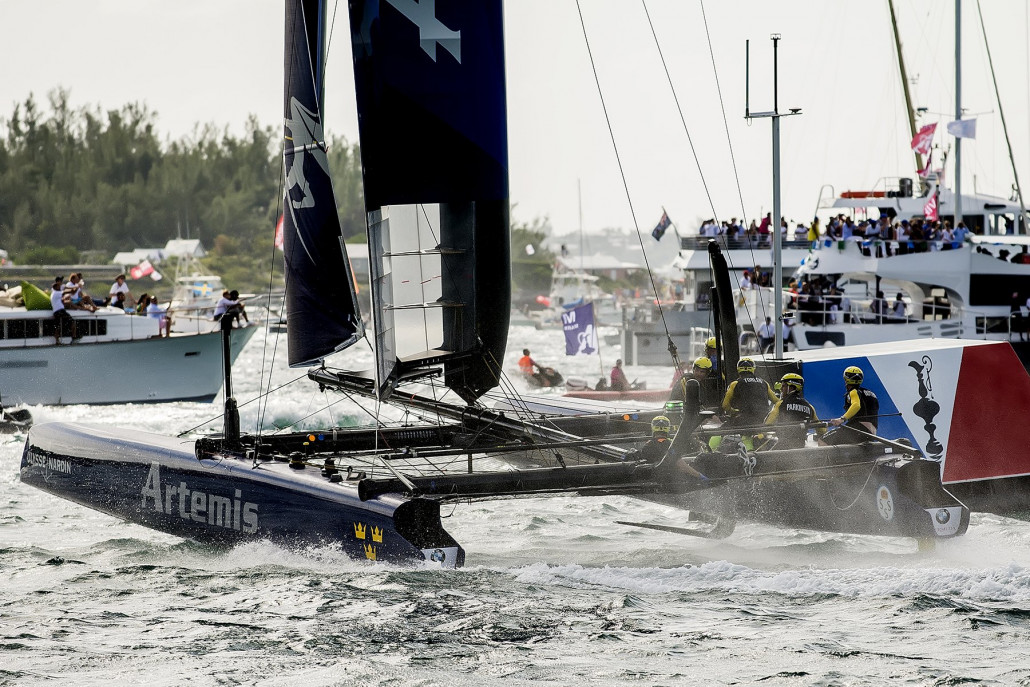 The decision to host the world’s biggest sailing event in Bermuda – a twenty square mile country with a population of just 65,000 – sparked controversy. Whilst Bermuda has a rich maritime history, concerns over unpredictable sailing conditions and a lack of existing infrastructure are no secret.

Hosting a World Series gave Bermuda a chance to silence the naysayers and give fans a glimpse of what’s to come in 2017; however, while infrastructure like the Cup Village, hotels and marinas can be created, wind and weather remain Mother Nature’s prerogative. With the sailing world watching and San Francisco 2013 fresh in the memory, the hopes of perfect conditions were high.

1,100 spectator boats lined the course boundary in wait for both the first glimpse of America’s Cup action on the Great Sound and the wind. Unfortunately the forecast was spot on and the wind never got close to the 6kt minimum required to get a race off.

Day One of racing was cancelled. The Race Committee organized a practice ‘race’ in Hamilton Harbour as a sort of conciliation to the thousands afloat on the Sound. A nice gesture but with only four of the six teams opting to take part and no where near enough wind for the AC45’s to get up on their foils it did little to distract fans and event organizers from the empty scoreboard.

Thoughts turned to Day 2. The forecast was for 8 - 9kts – enough for racing but not the high speeds that have attracted so many new faces to the sport.

But this time Mother Nature was on side and by 9:00am on Day 2 the wind was already in double digits and building. With double points available on ‘Super Sunday’ and an extra race added to the itinerary Day 2 in Bermuda was the most valuable in the World Series thus far.

Race 1 delivered – foiling, high speeds, lead changes, and incredible maneuvers. All the ingredients of the modern Americas Cup showcased against the stunning backdrop provided by the Great Sound. As the official ‘home team’ Oracle have spent more time training here than any other syndicate. That is experience showed and they survived a late challenge by Artemis to win Race 1.

Going into the Louis Vuitton Americas Cup World Series (LVACWS) Bermuda, Artemis (by their own admission) had been seriously underperforming. Dead last in Portsmouth and an embarrassing grounding on home waters in Gothenburg had left many with more questions than answers. This string of disappointments looked certain to continue when the umpire RIB crashed into Artemis during the pre-start of Race 2. Helmsman, Nathan Outeridge, went for a hook behind Softbank Team Japan only to find his AC45 on a collision course. Artemis went head-on into the umpire boat. The umpire was thrown overboard and the AC45 lost her bow sprit. With closing speeds of about 20kts everyone was fortunate to escape without serious injury.

The start of Race 2 was postponed to allow the Artemis shore team to strip away damaged elements and attempt repairs. Ten minutes later Artemis was sailing again. Resilience is so often a good measure of a top team – shore crew included. Artemis nailed the start and went on to win Race 2 – victory all the more poignant considering skipper Ian Percy’s past experience with Americas Cup tragedy. In 2013 friend and compatriot Andrew ‘Bart’ Simpson lost his life when Artemis’s AC72 broke up and destroyed itself during training.

Artemis was not the only team experiencing issues in Race 2. Land Rover BAR dropped from first to last after problems with their starboard dagger board control systems. The foil was stuck on maximum rake, forcing the boat to fly too high above the water and skid sideways.

By the start of Race 3 the wind was up to 15kts – near ideal conditions for the AC45’s. Going into the final race it was Artemis vs. Oracle for the regatta title. It came down to the final manoeuvre with Artemis executing a perfect foiling gybe and flying across the line in forth – their worst result of the day – but crucially ahead of Oracle in fifth. Artemis had overcome enormous pressure and a dangerous collision to win the LVACWS Bermuda and record their first respectable result of 2015.

Meanwhile Peter Burling had found his form and crossed the line in pole position, closely followed by Land Rover BAR who had adapted their tactics to compensate for issues with their starboard dagger board.

With racing over attention turned to the 2015 seasons overall standings. The ‘Moet Moment’ belonged to Artemis but with a first and a second on Super Sunday Peter Burling and Emirates Team New Zealand had done enough to maintain their position in the overall standings and end 2015 atop the leaderboard.

Despite a windless Saturday Bermuda’s first chance to host an America’s Cup event was deservedly hailed an outstanding success. “Any questions there were about Bermuda hosting this event have been answered” the Premier told the Royal Gazette. I could hardly agree more. Artemis won the regatta, Emirates Team New Zealand won 2015 but Bermuda really stole the show and proved just how well suited this tiny, sailing-mad island is to host the world’s largest sailing event. 2017 will be a special year.