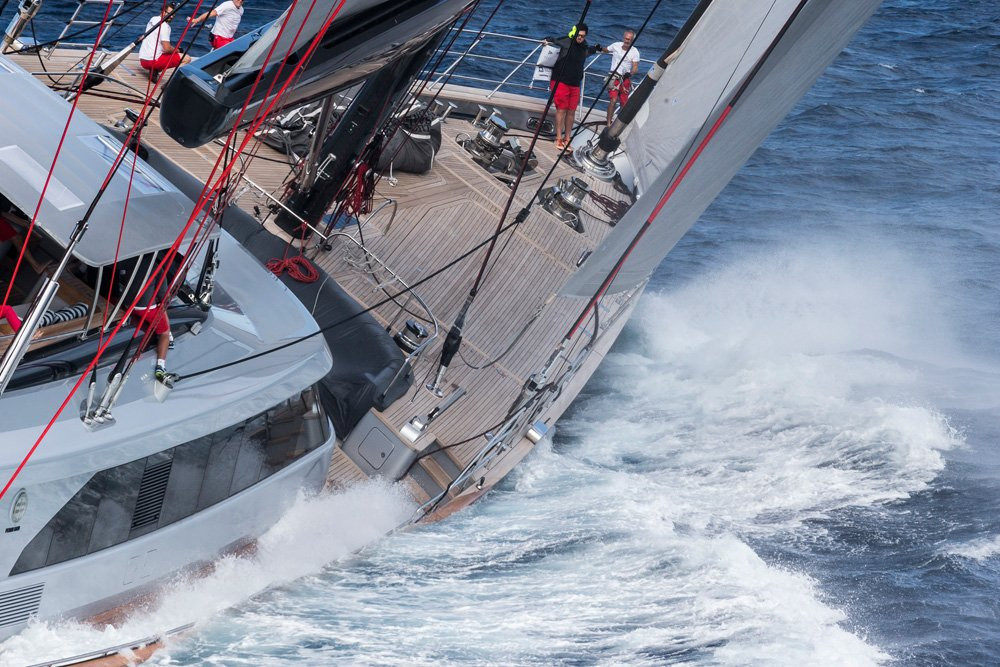 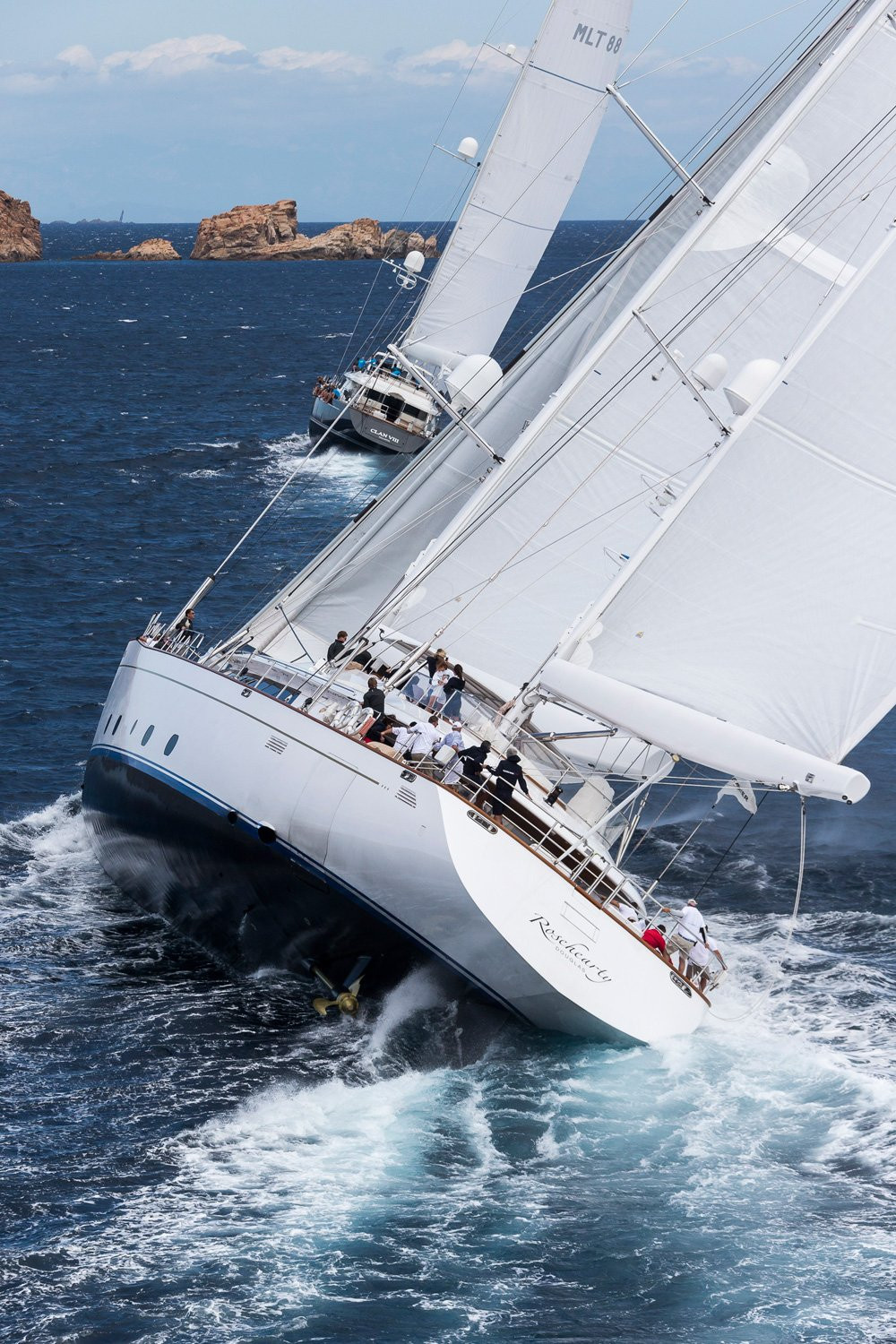 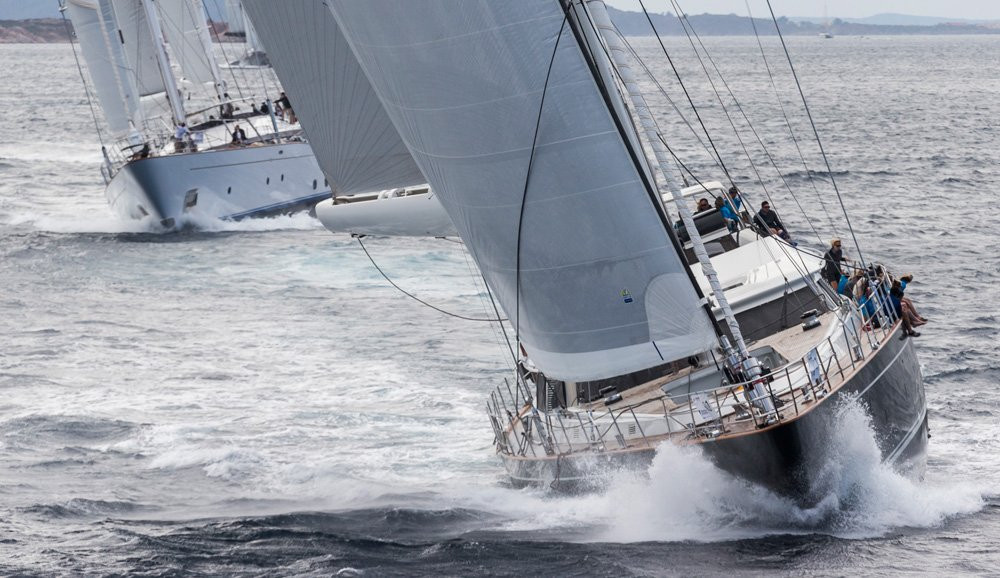 The third and final race of the Perini Navi Cup provided a dramatic finish to what was already an exciting regatta. With a huge shift in weather conditions, Race 3 saw wind speeds of 30kts with gusts of up to 36kts, providing a perfect chance to fly spinnakers and fight for first place.

With conditions judged to be ‘Flat Sea/High Wind’ by the ORCsy rating system, the boats started in a different sequence and in quicker succession than the previous days. Elettra was first to start, followed by Clan VIII, Jasali II and Rosehearty all crossing within space of three minutes. The high winds of the day saw The Maltese Falcon rated as the third fastest boat and fifth to start the race, followed by Seahawk and Perseus^3.

The downwind start of the race provided an inevitably thrilling leg of sailing. Clan VIII was the first to raise her spinnaker, managing to keep it flying for the entire of the first leg. Rosehearty swiftly followed suit with an unfortunate incident occurring with her spinnaker hindering her performance.

Rosehearty, despite her bad luck, managed to stand her ground and keep third position throughout the entire first leg. The following Jasali and Seahawk made the call to sail without spinnaker to the ‘southern/first’ mark. Meanwhile Perseus^3 - last to start the race and needing to gain ground - charged forward into the race once over the starting mark. The Maltese Falcon, the only yacht in the fleet unable to fly a spinnaker, showed off her impressive downwind abilities, reaching an impressive top speed of 16.5 knots.

The rounding of the southern tip of Mortorio saw a change in the order of the fleet with both Clan VIII and Rosehearty overtaking Elettra to the windward side. Seahawk then made a tactical decision sailing a tighter upwind angle repositioning them from 5th to 3rd place, overtaking both Elettra and The Maltese Falcon.

Seahawk sailed a fantastic final leg of the regatta overtaking the leading two yachts - Clan VIII and Rosehearty - to find herself front of the fleet, a position she held on to all the way to the finish line. Perseus^3 meanwhile sailed a tactical race, testing the yacht to her limits and reaching the top speed of the regatta at 17.4 knots on the first downwind leg, showing off her incredible design in the hands of a good owner, captain and crew.

The weather conditions of the third race of the Perini Navi Cup allowed the faster boats in the fleet to showcase their racing capability and completely altered the ranking of the regatta Leaderboard; Rosehearty secured a deserved first place.

Professional Sailor David Hutchinson commented; "Race three was interesting because on Rosehearty we had two firsts in the first two races we sailed in, in which we did very well. We were a little bit lucky but sometimes you have to be in the right place to be lucky. Today was a seriously strong day for the boats and the incredible thing was that the boat held together [...] we were beyond the edge for quite a bit. Sometimes you have to know where the line is and where to go beyond it. You have to ask the owner how far he wants to go to win this and he said ‘let’s get it done’.”

Clan VIII consistent performance securing 2nd place in every race and taking second place overall. Seahawk, who hadn’t been doing well so far with one DNF and one 6th place, sailed an amazing race which boosted them up to 3rd place.

Second place went to the 45 metre sloop Clan VIII while the 60 metre ketch Seahawk, launched in 2013 and with Mike Toppa on tactics, placed third overall thanks to a bullet in today's final race. Hosted by the Yacht Club Costa Smeralda from 2nd to 5th September, the event saw 15 Perini Navi yachts gathered in Porto Cervo for four days of racing and social events.

During the final prize giving ceremony held last night on the Piazza Azzurra overlooking Porto Cervo, Marina YCCS Commodore Riccardo Bonadeo commented on a highly successful event: "What a stunning fleet and a spectacular event. On behalf of the Club my thanks must go to the owners for bringing their magnificent vessels here, to Perini for choosing to hold their gathering here every two years and to all of the event sponsors. Together with the staff of the Club, everyone has worked incredibly hard to make this a truly memorable week."

Mrs Milena Perini also commented during the prize giving: "Thank you to everyone who participated. It has been a fantastic event and my family and I are happy that it has been such a success. Possibly the most important aspect of the regatta however is the wonderful atmosphere, everyone had smiles on their faces and that is what makes this event special.

Superyachts.com will be delivering the video, filled with tense racing and examples of what Perini Navi yachts can do under sail in 40 knot winds very soon.