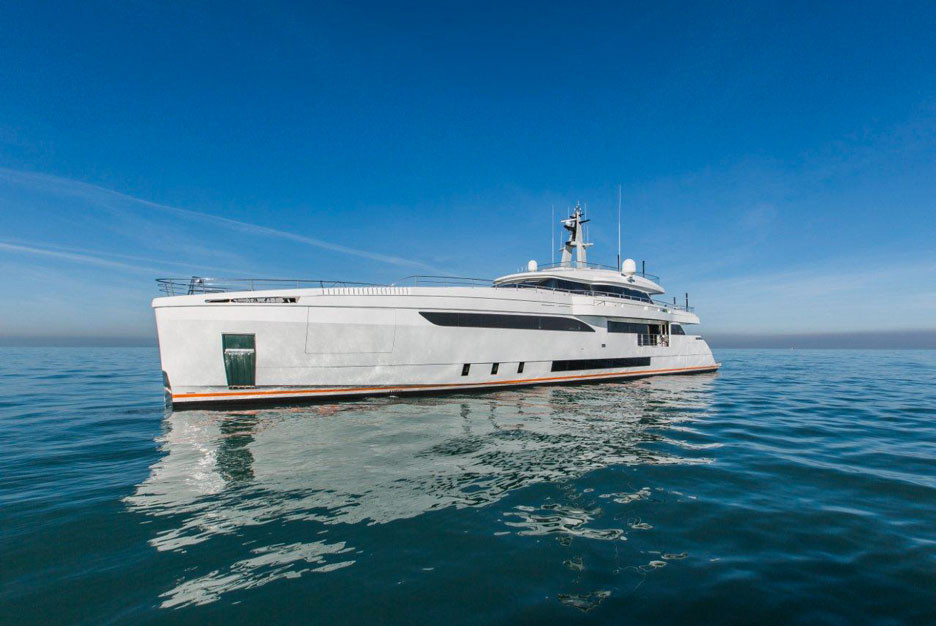 The Revolutionary Yacht Designs that Launched in 2016

This is an exciting year in terms of new launches, with next generation yachts hitting the water across the world in high-frequency. To celebrate that fact, we're taking a look at just some of the new design icons to hit the water in 2016.

Black Pearl
Originally dubbed Project Solar, the 106m (347.9ft) Y712 or ‘Black Pearl’ uses the signature Dyna Rig masts first seen on the 88 metre (288ft) The Maltese Falcon and features stunning a Ken Freivokh and Nuvolari Lenard exterior style. The progressive technology on board, the solar powered sails and the effortless style makes this one of the most important projects to hit the water this year and a milestone for her builders at Oceanco.

Jupiter
This incredible 124 metre (406.8ft) superyacht emerged from the Lurssen Yachts shipyard in the latter phases of 2016 and sparked great intrigue thanks to the revolutionary exterior styling by H2 Yacht Design. While the project entered the water as a mystery, we quickly uncovered the identity to be Jupiter. Secrecy being in Lurssen Yachts’ DNA, the global media was then baffled once more as two more yachts above 100 metres entered the water just days after.

Galactica Super Nova
Heesen Yachts’ largest superyacht, Galactica Super Nova measures 70.7m (229.10ft) and made an outstanding impact at both the Monaco and Fort Lauderdale Yacht Shows. The progressive Espen Oeino design and the cutting-edge capabilities of the Heesen engineers combined to create a yacht with high-speeds, sleek exteriors and high-efficiency; not to mention huge front-page coverage across the world.

Aquarius
In its own right, the Dutch yacht builder Feadship should have a dedicated list given their contribution to the global yacht fleet this year; however, few yachts stand out more than the Sinot-designed Aquarius. While both works of art, the 92-metres (301ft) Aquarius makes the list just ahead of the 96m Vertigo - which also arrived this year - due to the cutting-edge lines and sleek modern look.

Joy
The first exterior design to hit the water from London-based design studio Bannenberg & Rowell, Joy was a remarkable introduction to a brand-new style. This 70-metre (229.7ft) triumph features a new level of futuristic design elements with expert Feadship construction and a world of amenities on deck.

Bartali
WIDER Yachts emerged from Italy with new project sets across 2015 and then introduced the WIDER 150 (a.k.a. Bartali) to the water in 2016.  After stepping on board for sea trials across Monaco Bay, we discovered the cutting-edge technical prowess which is putting the WIDER Yachts brand at the forefront of a younger generation of owner.

Ulysses
Launched in 2015 and delivered this year, the 107-metre Ulysses finds its way on to this list due on two fronts. Her unrivalled world debut stole the show at the Monaco Yacht Show, but more importantly, her younger and bigger sistership - the 116m Kleven 370 - launched in 2016. The importance of the Kleven style is, only after a short time, now synonymous with adventure yachting.

Sailing Yacht A
While technically launched in 2015, the ongoing sea trials of 2016 means that this yacht continued to hold its importance - and global following - over the following 365 days. Launched by Nobiskrug, the German-built revolution-on-the-water was designed by Philippe Starck, measures 142.80 metres (468.6ft) and split opinions across industry and aficionado; acting as a poster-child for the signature evolution of yachting in 2016.

With so much activity and so many superyachts to choose from, these are just some of the revolutionary yachts we've seen enter the water this year. Think we've missed any? We'd love to hear your thoughts for a follow up list. So, feel free to get in touch via our Facebook, Twitter or Instagram feed. Alternatively, you can get in touch over email here.