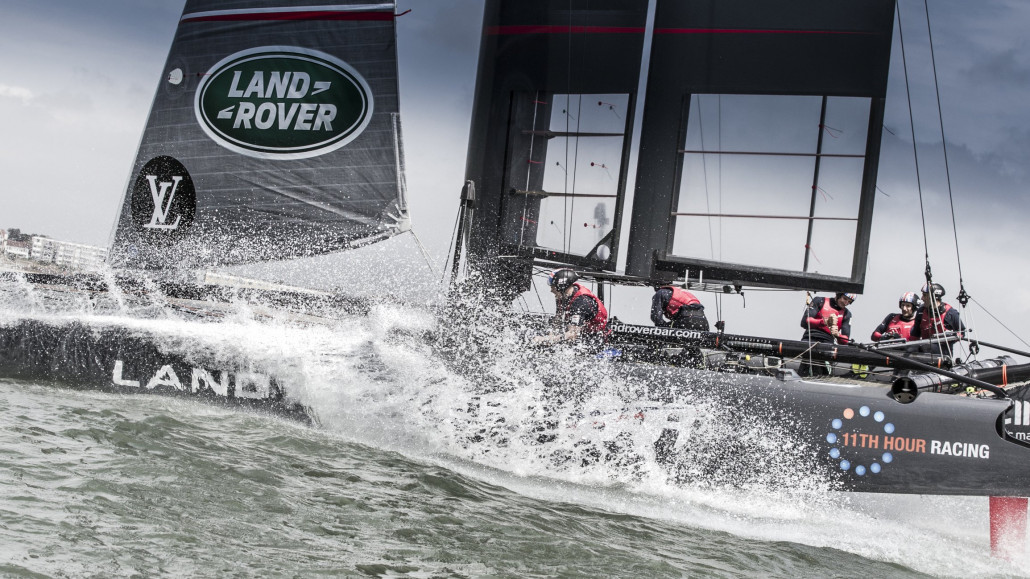 The Six Teams Challenging for The America’s Cup

The 35th edition of the America’s Cup, sailing’s most prestigious competition, kicks off in Portsmouth this weekend and as the six challenging teams prepare for battle, one man more than most will be feeling the weight of history on his shoulders.

Sir Ben Ainslie, captain and principal of Land Rover BAR, is spearheading his team’s efforts to become the first ever British winners of the cup. It is a remarkable fact that in its 164-year history, the famous old trophy has never made it to Britain’s shores.

Standing in his way will be five (or perhaps more, should the organisers’ recruitment hopes bear fruit) other talented and fiercely determined teams hailing from around the world. Below is a run-down of the six competitors.

Oracle (USA)
Funded by entrepreneur and passionate American yachtsmen Larry Ellison, Oracle are current defenders of the cup having won it in both 2010 and 2013. In Jimmy Spittal they also boast one of sailing’s most determined and charismatic figures, his crowning moment being in 2010, when he became the youngest ever skipper and helmsman to win the America’s Cup. In 2013 he led Oracle to a remarkable comeback against New Zealand to retain the trophy. Oracle were one of the first teams to launch their AC45 “Sport” (a development boat based on the AC45F that will be raced in Portsmouth) and have spent more time on the water than most challengers. Notable crew members include tactician Tom Slingsby and wing trimmer Kyle Langford from the 34th edition. Bowman  ouis Sinclair is the newest signing and comes fresh from winning the 2014/15 Volvo Ocean Race aboard Abu Dhabi Ocean Racing.

Artemis Racing (SWEDEN)
Artemis suffered a tragic blow during training at the last America’s Cup with the death of crew member Andrew ‘Bart’ Simpson, but the team have rebuilt their morale and are now considered strong challengers. Their team have shown huge promise – regularly outpacing Oracle when lined up aboard the development boats in Bermuda. How they compare aboard the one-design AC45F’s, that will be raced throughout the AC World Series, remains to be seen. Artemis have retained their core members from the 34th edition and boast four Olympic champions among their ranks. Double god medallist Ian Percy is team boss with 2011 and 2014 Moth Champion Nathan Outeridge on the helm.

Land Rover BAR (GREAT BRITAIN)
The addition of automotive expertise to the British entry’s personnel in the shape of former McLaren CEO Martin Whitmarsh has been hailed as a masterstroke by many, but Land Rover BAR still have plenty to prove. Captain Ben Ainslie’s sailing credentials are beyond dispute, though his past achievements have all been in solo dinghies, making this a new challenge. Other key crew members include Giles Scott, David Carr and Jono Macbeth. The team will enjoy home advantage in Portsmouth, where they have been training on the solent for months.

Emirates (New Zealand)
Arch rivals of Oracle, the Kiwi entry now has new foes in the shape of Japanese team Softbank, following the controversial split with long-term skipper Dean Barker. Emirates Team have also been hampered by the recent resignation of Grinders Winston Macfarlane and Derek Saward, along with pitman Jeremy Lomas, leaving them scrambling to get a crew together and the team have had less than a week of training together on the AC45F ahead of this weekend’s kick off. Nonetheless, with young whizzkid Pete Burling replacing Barker on the helm, along with the talents of sailors Glen Ashby and Ray Davies and highly experienced manager Grant Dalton, they are not to be discounted.

Groupama (FRANCE)
The downward revision of the new America’s Cup from a 62-footer to a 48-footer has made it possible for the French syndicate to seriously contemplate a campaign for Bermuda 2017 – and they have team to make it possible. For highly respected skipper Franck Cammas, the challenge of jumping into a new design – and winning – is nothing new. Having conquered the world of offshore multihull racing, Cammas switched to monohulls, winning the 2011/12 Volvo Ocean race aboard the VOR 70, Groupama 4. And Cammas is not new to the world of foiling multihulls having won he C-Class World Championships (also known as the Little Cup) outright in 2013. He is ably backed by gifted teammates including Arnaud Psarofaghis, Thierry Fouchier and Michael Desjoyeaux.

Softbank (JAPAN)
Softbank is the only team that can boast not one, but two former AC72 skippers in it ranks. While former Emirates New Zealand skipper Dean Baker will be on the helm in Portsmouth the new team is quick to point out that Chris Draper may share that role in the months and years to come. For now though, Draper assumes the role of wing-trimmer/tactician. Barker is by far the most experienced America’s Cup sipper in the fleet, having competed in the previous five events. However, the skipper goes into the Portsmouth race having not raced a foiling cat in around two years. Indeed, the team as a whole only embarked on their first taste of sailing the AC45F last week, but after 10 days’ training are said to be in good shape. Key crew members include trimmer Jeremy Lomas and grinder Derek Saward – both formerly of Team New Zealand.