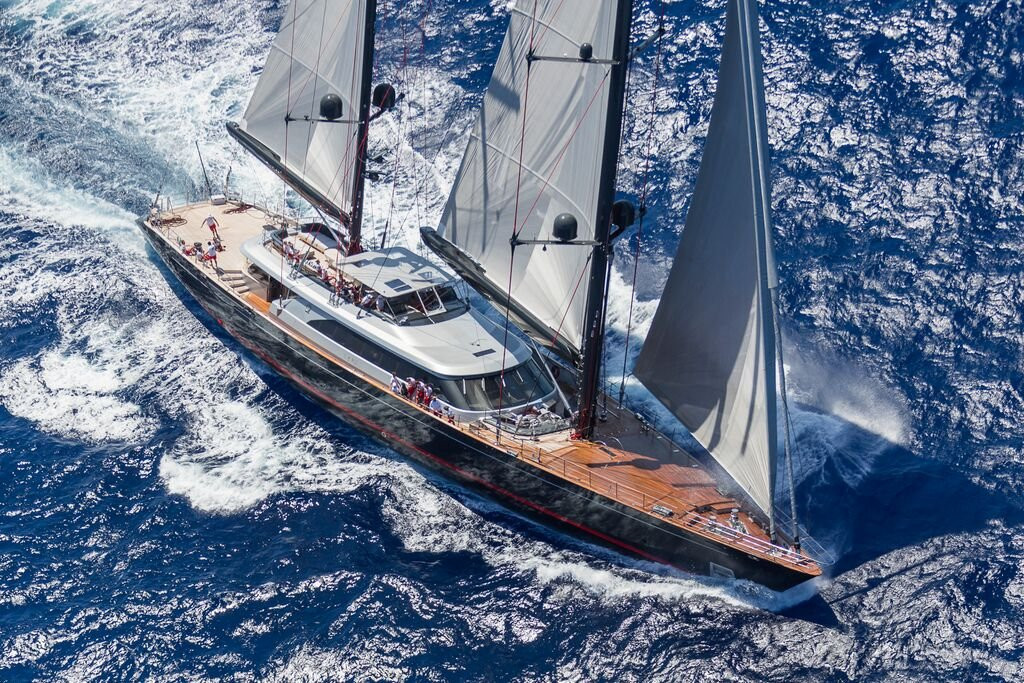 The Yachts Of The 2015 Perini Navi Cup

Next week marks the start of the 2015 Perini Navi Cup, and in honour of the upcoming race, Superyachts.com takes a look at some of the entry list vessels set to face off against one another in a battle which will see them power through the emerald waters of Sardinia for three exciting days.

The Maltese Falcon
A Perini Navi Cup favourite and an iconic yacht in its own right, The Maltese Falcon is the largest Perini Navi yacht ever built. This titan of sailing has revolutionised how owners cruise the waters thanks to her ground-breaking DynaRig system, which also acts as a symbol of the Italian builder’s forward thinking approach to life under sail.

This 88 metre sailing yacht took part in the previous edition of the Perini Navi Cup and performed with expected grandeur, a must-see at the latest Cup - if only to see how Captain Bell can better her time two years down the line.

Bayesian
56 metres of classic Perini Navi construction, this 2008 sloop features the characteristic pedigree of design of Ron Holland and the Perini Navi in-house team and reflects a certain style synonymous with luxury living on the water.

A smaller yacht than the Maltese Falcon, like the rest of the fleet, however after her performance in 2011 this yacht could mark itself as a contender.

Clan VIII
A first timer at the Perini Navi Cup, Clan VIII was launched in 2011 and is a stunning 45 metre sloop sail with a lot of potential on the water given - an exciting unknown entity in the race.

Perini Navi were responsible for her entire engineering package with Ron Holland lending his expertise to the timeless exterior styling. Clan VIII is a yacht which adds to the glamour of the Perini Navi Fleet.

Jasali II
After pulling in at 6th during the 2013 Perini Navi Cup, Jasali II is another timeless character in the Perini Navi family and performs under total Perini Navi engineering. Jasali II was built in 1998 and underwent an extensive refit in 2008, a yacht with renewed strength, classic charisma and clear potential when pitted against other yachts.

Perseus^3
Launched just last year, Perseus^3 is bringing state-of-the-art ability and performance to the race. This beautiful new 60 metre yacht is sleek, stylish and sure to keep the reigning champs on their toes. Perseus^3 is one we’ll be watching closely over the course of the race and look forward to finding out her overall position when the aggregate is announced.

Rosehearty
Every spectator will know the white hull powering through the water as Rosehearty, a distinctive 2006 yacht yet to be tested on the waters of Costa Smeralda against her family fleet. This is another yacht with a lot of exciting potential in the race, combined with an outstanding reputation as a beautiful example of Perini Navi’s legacy of expert construction.

Seahawk
A firm favourite of the 2013 Perini Navi Cup given her recent launch at the time, now racing with a view to win. Seahawk is a Perini Navi through and through, with a highly technological approach to life under sail and uncompromising luxury on board. When that red spinnaker goes up, it could very well be the site which sparks a string of spinnakers breaking behind her.

This is a celebration of the Perini Navi Family and the life which comes with a true passion for sailing. Given this, there will be a whole fleet at anchor attending the Perini Navi Cup outside the race and we look forward to bringing you more details about the exciting fleet when the race kicks off on the 3rd September.