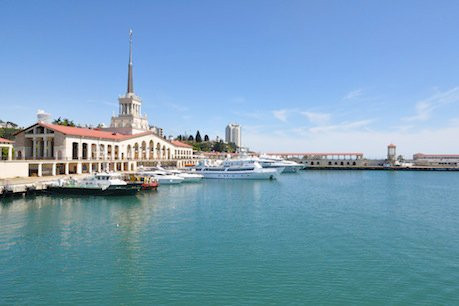 We’re on the Riviera this week: not the French, but the Russian. It’s precisely 12 months until the 2014 Winter Olympics kick off in Sochi, Russia’s ritziest resort. There are more towering cranes and private planes on show than in downtown Dubai.

This global sporting event makes Sochi this season's superyacht must-see. The Olympics have already regenerated the Black Sea resort with a multi-billion-Rouble facelift. Its new piazzas, parks, restaurants and bars are best enjoyed on a sunny summer's day.

And later in 2014, the introduction of a Formula 1 street circuit will add further weight to the city’s Monaco-sized ambition. (Click here for the official clip of Bernie and Vladimir signing on the dotted line.)

By coincidence the race will be held exactly a century after the first Russia Grand Prix in St Petersburg. That 1914 competition was won by a Benz. However, both German motorcars and elite sports fell out of favour as the Soviet era dawned.

But even under communist rule, Sochi held its own. The resort was once the Soviet St Tropez. Joseph Stalin built his favourite dacha in its subtropical hinterland. Yuri Gagarin sojourned on the sandy shoreline after his voyage into space. State-of-the-art sanatoria dispensed health cures to the communist elite. The resort is still lined with more neo-classical buildings than London’s River Thames or Shanghai’s Bund.

Sports fans may also sail 50km north of Sochi. The Western Caucasus is a UNESCO Biosphere Reserve. This barely-touched wilderness runs from glaciers to rainforest in a matter of miles. Kayaking, hiking and mountain biking may never get this good again.