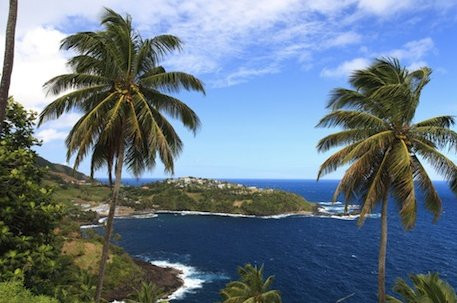 Tristan Rutherford's Postcard From... The Caribbean

This week a decade ago, Johnny Depp and crew were up wrapping for Christmas on the set of Pirates of the Caribbean. But all was not well in paradise.

The use of three replica Spanish galleons had blown the budget. Production costs were $100m and rising. Worse still, Disney studio boss Michael Eisner failed to see the funny side of lead pirate Jack Sparrow, a character Depp based on legendary rocker Keith Richards. “He's ruining the movie," declared the Disney chief. "Is he drunk?”

Alas, Pirates of the Caribbean was nominated for five Academy Awards. It scooped up $654m at the box office. The fifth Pirates movie is scheduled for release in 2014. And Keith Richards himself appeared in the third installment, swaying like only a Rolling Stone can.

But the undisputed star of the set was St Vincent and the Grenadines. This island chain was once awash with pirates. Visitors may imagine the scene as they swim to the empty sands of Buccament Bay. A knowledgeable yacht captain will seek out the sets from Pirates of the Caribbean, including the smuggler’s cave at Black Point.

These days crew can accompany children on a pirate-themed adventure onshore. Grown-ups can hit the spa on Young Island, where Depp and Keira Knightley were pampered pre-filming. A true buccaneer beach is Petit Byahaut. This lovely leeward bay is film set class and can only be accessed by sea.

For the best of subaquatic St Vincent, have a dive master escort you to the Oblizalo Drift. This undersea current glides divers through a land of canyons, caves and schools of fish. It’s more Finding Nemo than Jack Sparrow, but an experience not to be missed.