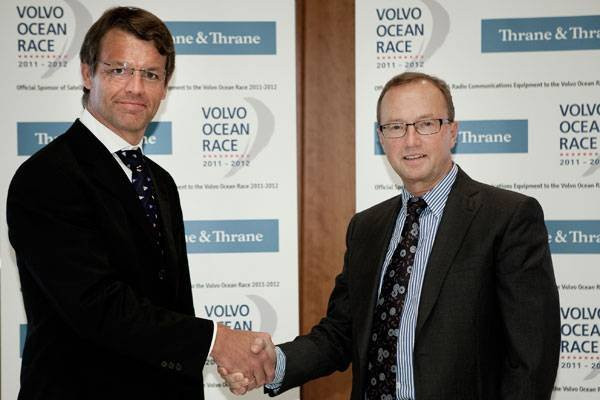 Thrane & Thrane has announced today that it will play a vital role in delivering the close-up, onboard action from the next Volvo Ocean Race to the millions of fans worldwide.

The Copenhagen based company has signed up to become Official Sponsor of Satellite and Radio Communications Equipment for the third consecutive race.

The agreement means that Thrane & Thrane's latest generations of SAILOR FleetBroadband and VHF equipment will be onboard every cutting-edge Volvo Open 70 as they line up in Alicante for the start of the race in October 2011.

"We have once again selected Thrane & Thrane to provide a comprehensive communications package for the teams, based on the support and faultless performance of the SAILOR equipment in the previous two races," said Knut Frostad, CEO, Volvo Ocean Race during the sponsorship signing in Copenhagen.

Frostad added: "We need the latest and best technology to ensure our vision and commitment of bringing the extreme offshore racing to a global TV and web audience."

Every Volvo Open 70 race boat as well as Volvo Ocean Race's own crew and umpire fleet will be fully equipped with variants of the newly introduced and advanced SAILOR 6200 VHF series. The series is highly regarded by users, due to its famous replay function and robust waterproof design, which makes it suitable for even the toughest marine environments.

The Volvo Ocean Race will visit eight stopover ports on five continents and race through four oceans, in under nine months. The Volvo Open 70s will cover over 39,270 nautical miles racing around the globe.