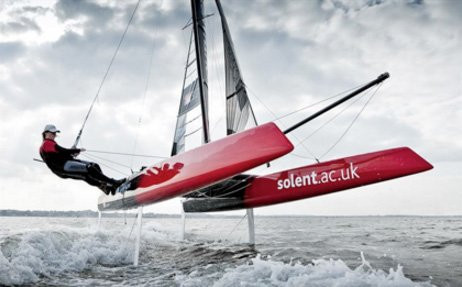 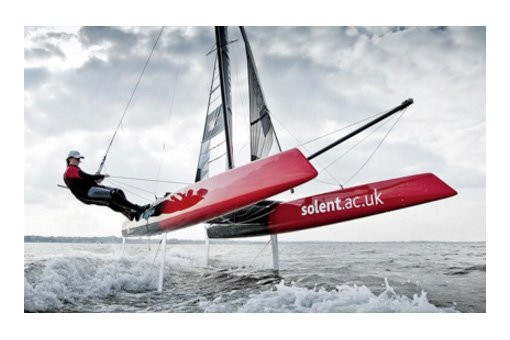 Whisper Catamaran: Flying Your Own Foil

The White Formula Whisper is a cutting edge catamaran that has been designed and built in the UK.

Designer Ron Price had the idea to bring an affordable flying catamaran to the world sailing scene. After watching the incredible 2014 Americas Cup upset, Ron decided if he couldn’t get a ride on one he would build his own, he designed the Whisper completely on computer and modelled it using very sophisticated marine development software.

Six months later he was well on his way to launching his prototype. On day one of testing the Whisper prototype foiled flawlessly for over 4 minutes without dropping off the foils.

The production moulds have now been completed on a 3D 6 axis cnc milling machine, and the first boats have been built and are on the publicity circuit visiting many of the world's boat shows. The new wing style mainsail shows all the flare of a wing sail with the easy storage of a regular sail.

The boat is made using a cutting edge epoxy / carbon fibre infusion method, fully built in the UK and fitted out in the company's production facility in Essex, the Whisper comes in at a platform weight of only 78Kg.

The advancements in 3D printing and laser sintering has come on leaps and bounds in the last few years, the recent application of printing Carbon Fibre has allowed us to cut a lot of cost out of manufacturing intricate moving parts. The internal parts of the boat are also computer cut, using a 3 axis cnc machine, meaning the incorporation of weight saving areas into the structure of the hull, lowering the overall weight.

The Whisper is a one design class, but when it comes to the styling, the sky is the limit.