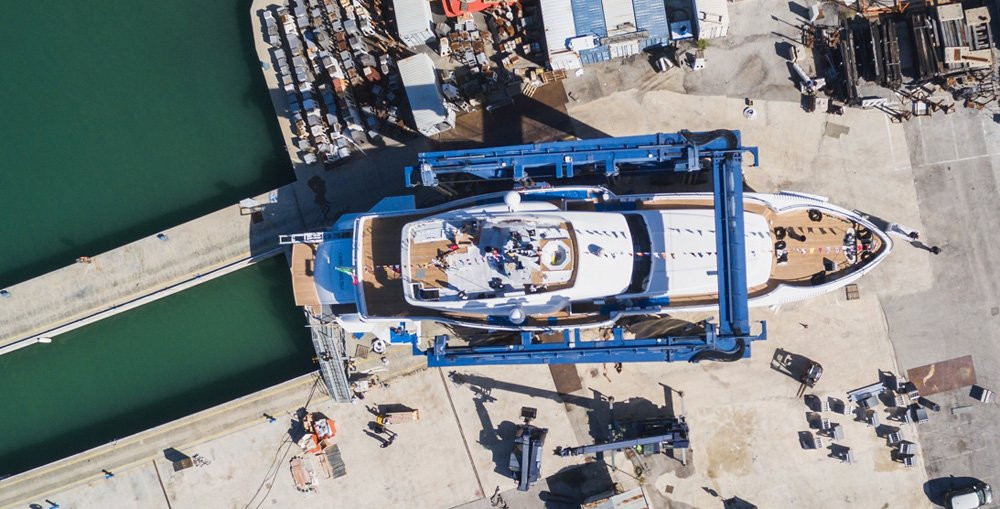 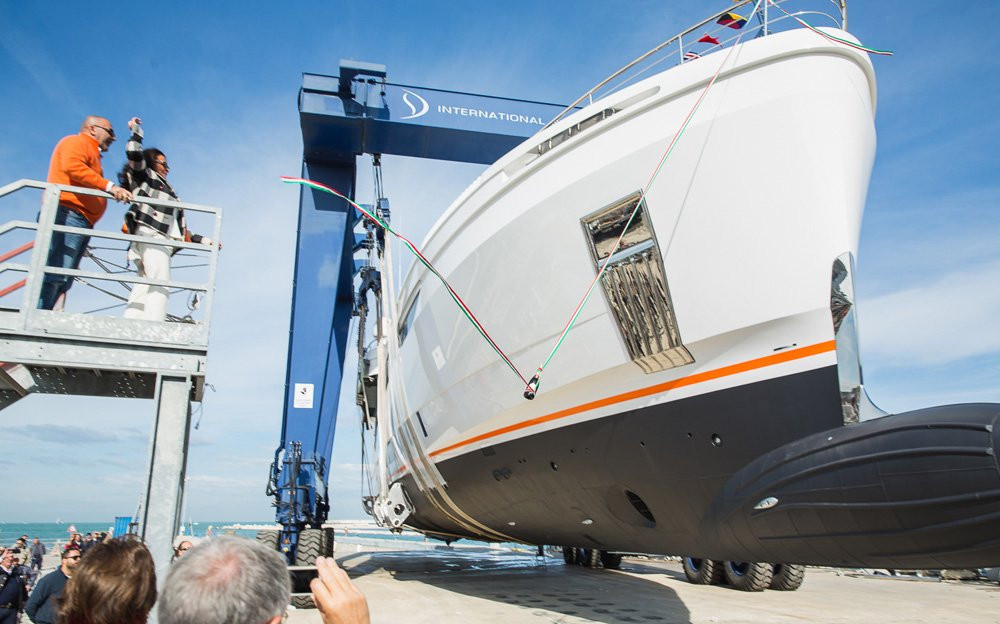 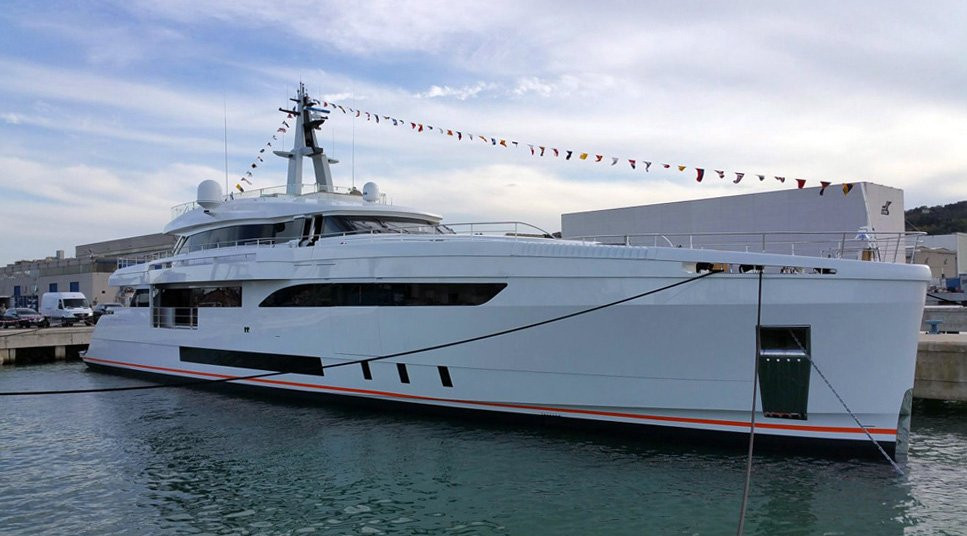 WIDER 150 Comes To Life After Launch

The WIDER 150 project has today reached the water after 2 years of planning and tens of thousands of man hours in construction at the WIDER Superyacht Division headquarters in Ancona, Italy. With a gleaming white hull and superstructure, intricately refined cabinetry fitted, the yacht which has generated so much attention during her construction has met the ocean for the first time with every yard-based operation completed in full.

“The extra time in the main shed allowed us to push ahead with the interior… it is now 90% complete. I have launched dozens of yachts in my career but have never done so with this level of completion to the interior outfitting… this will save us time in the final commissioning” says Juan Balaguer, Wider COO.

WIDER have been working in very close collaboration with all of their technical suppliers, and industrial giant Emerson Automation concluded eight weeks of tests on the diesel electric system prior to the launch. Their specialist technicians will return for the sea trials working alongside VETH Propulsion, suppliers of the propeller pods, Visedo, suppliers of the electric motors, and EST Technologies, suppliers of the lithium polymer battery banks that lie at the heart of the vessel’s efficient power system.

“It is enormously satisfying to see the WIDER 150 in the water for the first time” says Tilli Antonelli, Wider Founder and CEO. “But now we have the important task of checking that everything is working to the same high standards that we have set ourselves in every other aspect of the construction process. We believe that this can be done in 8-10 weeks but will not rush anything if it means compromising on the quality of the finished yacht…We will make sure that she is 110% finished before unveiling her in full to the market.”

Once every test has been concluded and the yacht has reached the technical and operational excellence that is expected from her, she will be presented to the public in a series of events that will be announced in the near future.

A New Evolution In Yachting
Constructed entirely in aluminium, the elegant profile of the WIDER 150 project was created by yacht designer Fulvio De Simoni in collaboration with WIDER Founder and CEO, Tilli Antonelli and the in-house WIDER design team.

Conceived for someone who enjoys being out on the water, is looking for the large outdoor spaces to do so, demands all of the indoor comforts they require from a home and an engineering package which allows them to appreciate the entire yacht in the highest levels of comfort. The WIDER 150 boasts more than 350m2 of external areas, offering numerous relaxation spaces in direct connection to the sea for the owner and guests to enjoy.

Inside, the WIDER 150 offers all of the comforts an owner demands at home while at sea. The elegant, contemporary interior includes furniture and leather supplied by Poltrona Frau with large floor to ceiling windows throughout the main and upper deck lounge areas permitting sunlight to flood in and provide panoramic views of the sea.

The upper deck features a sky lounge and dining area with sliding doors to the outside that can be hidden from view allowing for an indoor/outdoor dining experience. On the main deck, the spacious main saloon is divided into two large living spaces, one for relaxing the second a formal dining area.

Forward of the saloon is the 75m² full-beam owner’s suite that can also be split into two distinct areas, separated by sliding doors, an office / study and sleeping quarters including walk-in wardrobe, a sizeable 5.6m² sea terrace, as well as bathroom with 3m shower and custom made wooden bathtub.

The WIDER 150’s beach club is larger than any other boat of comparable length. It provides a magnificent onboard oasis, easy access to the sea, and plenty room for sunbathing. The marine experience is further enhanced by a covered 7m seawater swimming pool. Thanks to its floating system, the stern of the WIDER 150 can be converted into a spacious garage ideal for carrying the WIDER 32. The beach club’s seawater pool opens up at the transom to allow the tender to be driven in. This system makes entry and exit maneuvers considerably easier for the crew.

Technical Excellence
The WIDER 150 is powered by a diesel-electric propulsion system combined with Azimuthal pods. Four inline variable speed diesel generators, combined with the state-of-the-art WIDER power management system and the latest battery technology, serve the hotel and propulsion requirements of the vessel. This system reduces consumption while at the same time facilitating unprecedented range.

The traditional engine room has been replaced by two separate units; the Power Generator Room in the bow and a Technical Room with LiPo (Lithium polymer) battery pack in the stern. This leaves the heart of the vessel free for larger, more comfortable guest cabins located in the most stable part of the yacht.

The overall propulsion system is completely modular, so the WIDER 150 can cruise using only the battery packs, in ZEM (Zero Emission Mode), or with up to four inline diesel generators. This means it can cruise at a higher range of speeds while continuing to enjoy limited specific fuel consumption.

All onboard energy sources are controlled by the WIDER Power Management System, a smart and fully integrated system which controls the power supplied by the shore connection, the gen-set and the battery packs, distributing it between the hotel requirements, the propulsion system and the recharging of batteries, as required.

The diesel electric propulsion system is not new (the first ship fitted with this system was in 1903) and draws inspiration from thousands of military and commercial vessels that run using diesel electric power. The system has been refined over the last century to provide the most reliable and economic solution to many applications in the marine industry today.

The WIDER Engineering team have sourced experienced and proven suppliers to apply diesel electric technology to the superyacht environment, where not only reliability and economy are called for, but also supreme comfort and convenience.

A range of 3,000nm is expected at a cruising speed of 13 knots, increasing to 4,200nm at the economical speed of 11 knots. The yacht has a maximum speed of 15 knots and can also run at 5 knots when solely using batteries in Zero Emission Mode.