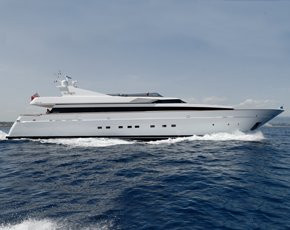 Built by Italian shipyard Cantieri di Pisa in 2007, Superyacht Gladius is a fast performing 38.5m motor yacht with a sleek and sporty design based on the Akhir 125 semi-custom model.

Superyacht Gladius features multiple interesting features such as a large garage door, located in the stern, which opens to form a fantastic swimming platform, access to multiple superyacht toys and a sophisticated interior from Carlo Paladini.

Powered by twin MTU 12V 4000 M90 diesel engines, Superyacht Gladius can reach a top speed of 26 knots alongside a cruising range of 800 nautical miles. Gladius is also capable of accommodating up to 12 guests in five cabins, consisting of one master, two doubles and two twin cabins.

Matt Albert from YPI Brokerage informed us that Superyacht Gladius has now been reduced by €400,000, bringing her down from 9.9 million to 9.5 million.