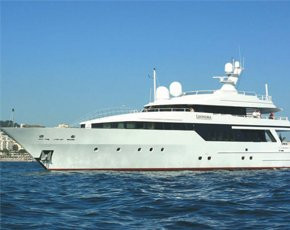 Winner of two industry awards, Leonora (ex Be Mine) was built in 1991 and then completely revitalised after undergoing a major multi-million Euro refit in 2009.

“Leonora is a genuine pedigree yacht,” says Senior YPI Broker, Matt Albert. “She was built by the world’s pre-eminent superyacht shipyard, Lürssen. She won two of the industry’s major awards when she was launched in 1991: the ‘Superyacht of the Year Award’ from Showboats International and the ‘International Superyacht Design Award’ from the prominent Superyacht Society. Since she was purchased through YPI in 2006 she underwent a multi-million Euro refit which raised her cosmetic and technical standards to the highest possible levels.”

Alongside her comfortable interior design from Celeste Dell Anna, Leonora can achieve a top speed of 16 knots and reach a distance of 3,500 nautical miles at 12 knots; well equipped with state-of-the-art navigational, communications and entertainment equipment for the owner and guests.

This expertly constructed superyacht can accommodate up to eight guests in four cabins and can run comfortably with a crew of eight.