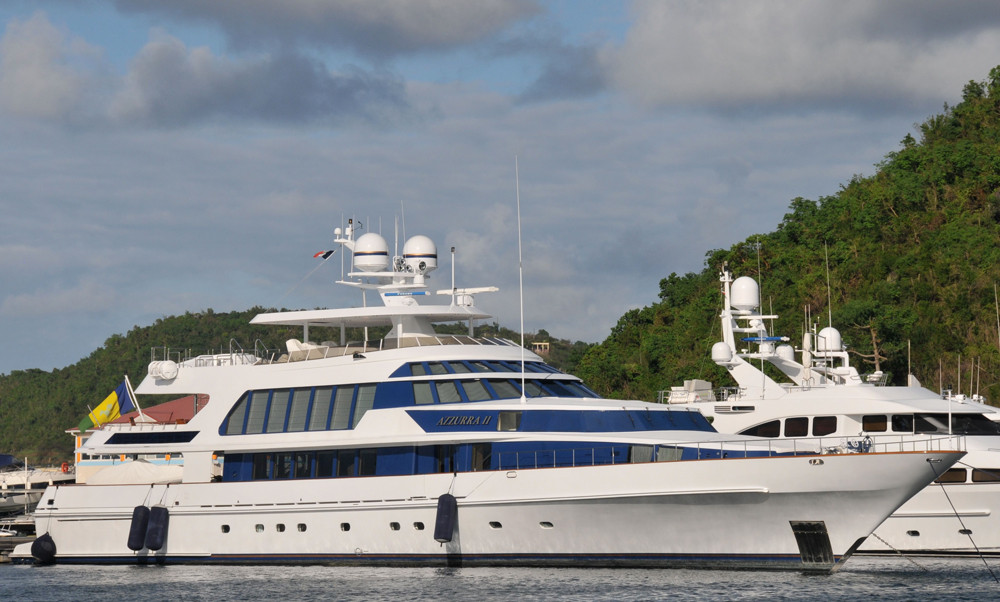 Motor yacht Azzurra II has been beautifully rebuilt since her 1998 launch by renowned shipyard CRN and stands as a modern and luxuriously appointed superyacht. This impressive Italian vessel is a combination of steel hull and aluminium superstructure featuring exterior design by Gerhard Gilgenast and the interior talents of Paola D. Smith. She measures 47.9 metres in length and can accommodate up to 10 guests.

This luxury vessel has been known as both L’Azzurra, and Neninka II in her successful history and has been well maintained. Azzurra II underwent a massive refit in 2004 just before being sold to her new owner that saw her emerge with zero-speed stabilizers, and V-Sat which allows wireless, broadband Internet access throughout the yacht anywhere in the world.

Her latest refit in 2008 saw the addition of even more modern luxuries including a sun deck sunbathing zone, six-person Jacuzzi, and a new hard top among other upgrades. Besides the Jacuzzi and hard-top, the fresh sun deck is home to a bar with a built-in grill, a seating area, sun pads, drop-down television, and entertainment area with blue party lighting, surround sound speakers, and another TV.

The main deck is home to a large main salon with a wealth of seating and a home theatre system, while the formal dining area for 10 sits nearby. The entertaining upper salon is home to a sky lounge with full-length windows, a bar, audio/visual system and Karaoke machine.

Amongst her five cabins are a lavish Owner’s suite; two Double cabins; and two Twin cabins. The master cabin is highlighted by climbing windows that give its occupants first-class views of whatever may lie beyond port, while the guest cabins below are all generously oversized.

Luxury yacht Azzurra II is powered by two MTU 12V 396TB83 diesel engines that allow her to reach a maximum speed of 18 knots and cruise comfortably at 15 knots. She is capable of a range of 8,500 nautical miles at 11 knots.

Featuring a dedicated crew of 14 headed by Captain William J. Keiser she is an excellent charter yacht for luxury vacations. Azzurra II cruises the East Mediterranean during the summer charter season and the Caribbean in winter. She has ABS classification.