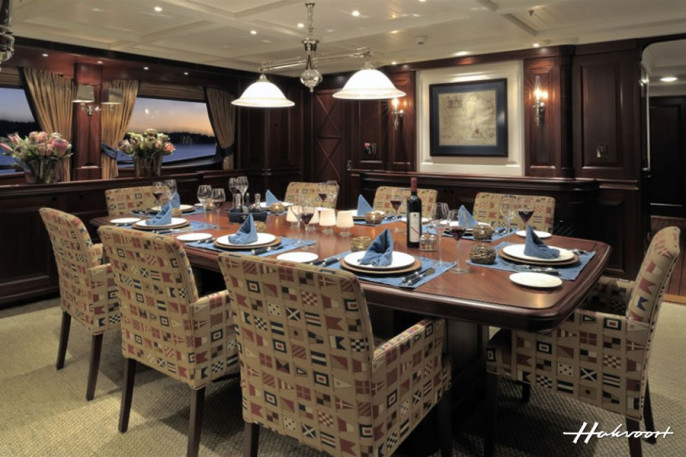 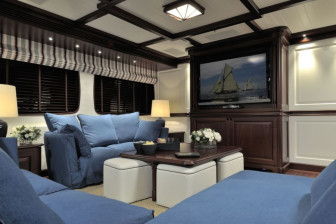 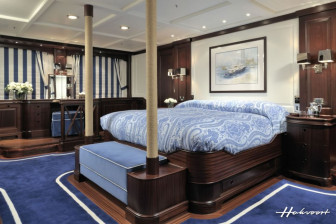 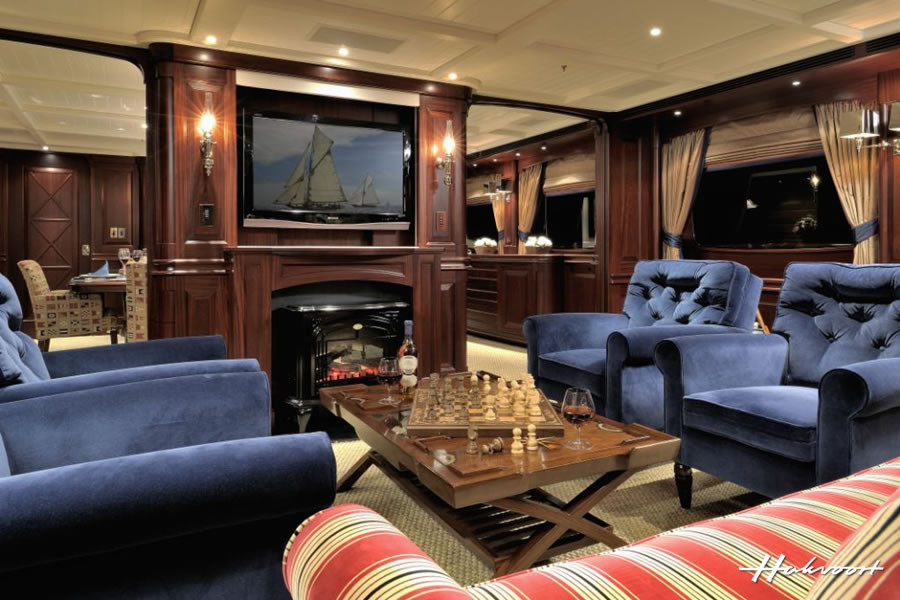 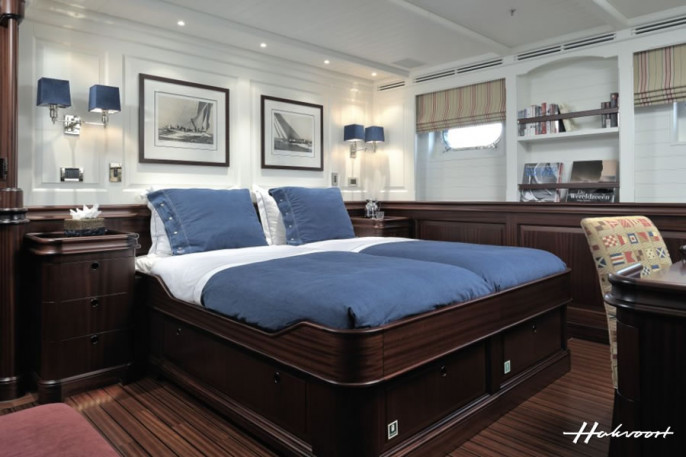 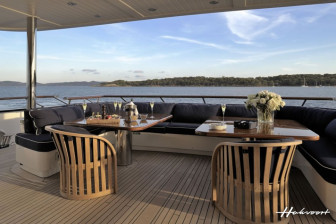 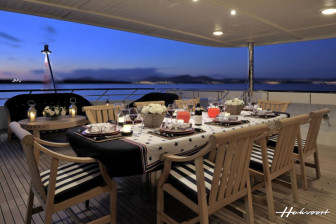 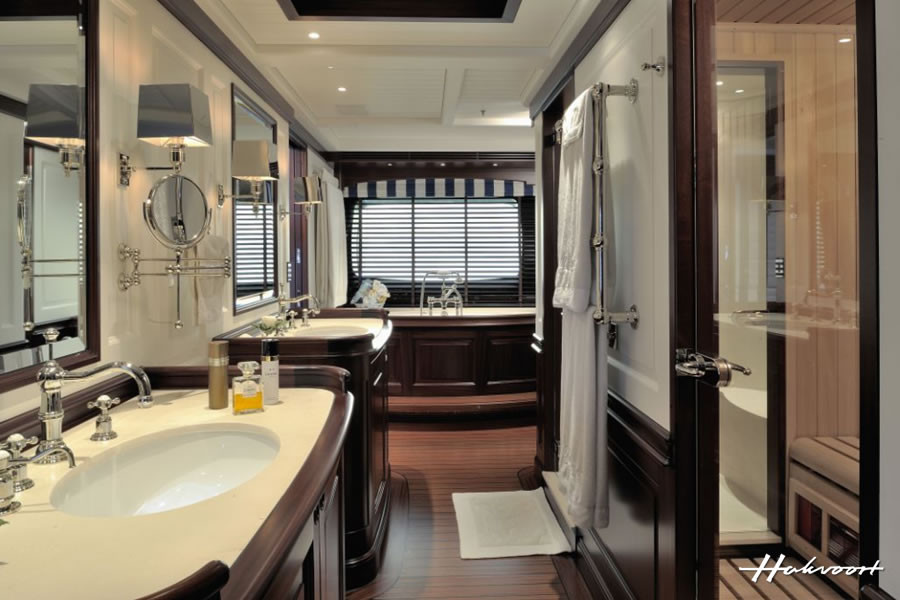 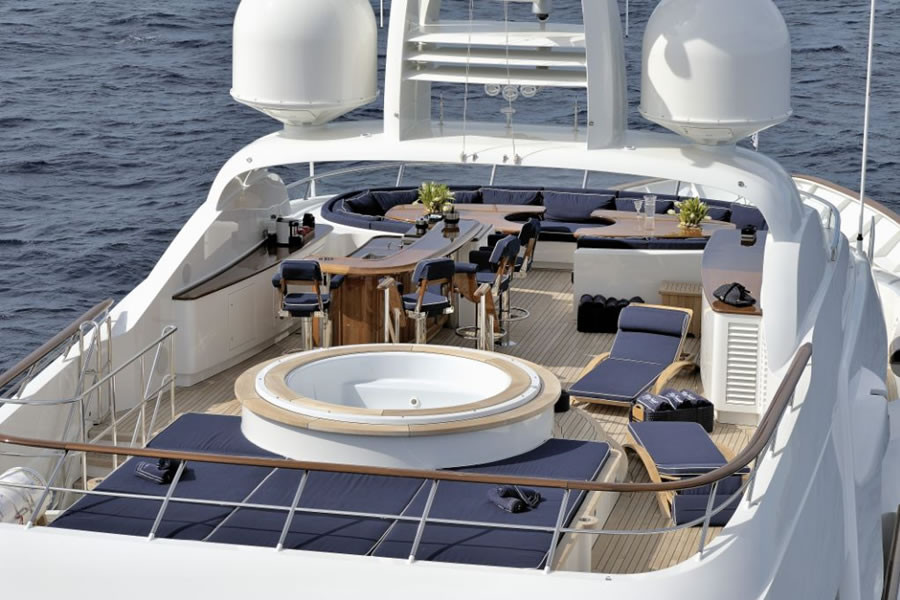 Luxury motor yacht My Trust, built in 2008 by Dutch shipyard Hakvoort, is a modern tribute to an opulent outdoor lifestyle. With a steel hull and aluminium superstructure, her naval architect is Diana Yacht Design while she features exterior design by Cor D. Rover and the interior work of Felix Buytendijk. This arresting vessel measures 45 metres and can accommodate up to 10 guests.

With a distinctive dark blue hull, My Trust creates an imposing picture with her sweeping line that extends from her stern to the very top of her superstructure. Her exterior finishes are rare for a yacht of her size, featuring details finished in teak veneer that only adds to the vessel’s warm ambience.

The luxury motor yacht’s bright and spacious aft deck offers a generous seating area complete with a sofa large enough to seat 10 and two large teak tables. Atop this sits the sundeck boasting a whirlpool tub for up to six people and liberal space for lounging in the sun. When the heat gets too much, there is even a 15-nozzle water-misting system that operates with the touch of a button. For entertaining there is an electric stainless grill and bar.

The superyacht’s impressive lazarette is more well-equipped then most, featuring air conditioning and a complete bathroom with shower. Here the garage houses a full range of watertoys, a dive compressor, tender and three PWCs. Also onboard are two Vespa scooters ready to be ridden ashore.

Drawing on the red, blue and white of the Dutch flag, the super yacht’s colour scheme is complemented by a distinctly nautical interior, somewhat resembling a traditional sailing yacht. The main saloon features a dry bar, and pop-up LCD screen alongside a dining area and, further forward, a galley and pantry. The bridge deck boasts its own lobby as well as a bar fashioned in the same way as a classic yacht club complete with beer taps and an espresso machine. The area also houses a lounge with sofas, games table and cinema.

Amongst her five cabins are an indulgent owner’s stateroom and four double guest staterooms. The owner’s suite is accessed via a large study and features a retractable LCD flat-screen TV, two-seat sofa, walk-in-wardrobe, and a private bathroom with shower, whirlpool bath, sauna and treadmill. The lower deck houses the four guest cabins each with en suite, hidden drop-down TV and Pullman bunk. An extra-luxurious feature is the remote-controlled system for the AV as well as cabin lighting, curtains and air conditioning. Crew accommodation is situated forward on the lower deck and consists of four double cabins with separate bathrooms, all of which open off the crew’s mess.

Featuring a dedicated crew, My Trust is an excellent charter yacht for luxury vacations. The yacht cruises comfortably at 11.3 knots while her crew of nine ensure the needs of every guest are met.

My Trust was built in compliance with MCA standards and to class with Lloyds. She is also the first superyacht from the Netherlands to be constructed under the new charter guidelines for Commercial Cruising Vessels (CCV).

She cruises the West Mediterranean during the summer charter season and the Caribbean during winter.